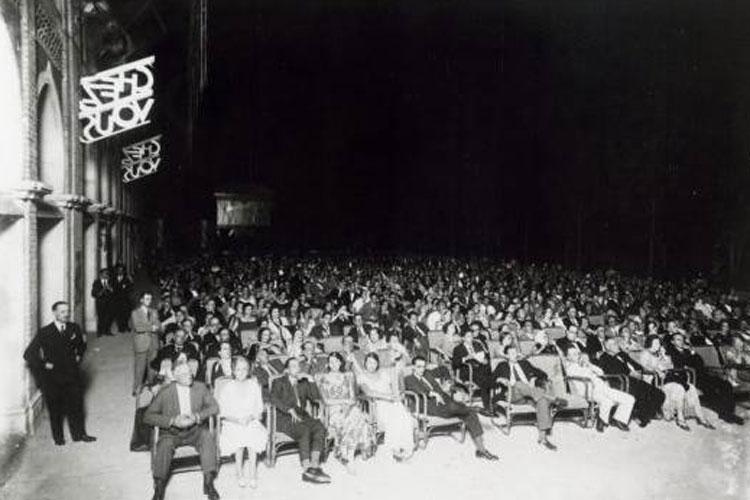 The 90th anniversary of the Mostra Internazionale d’Arte Cinematografica

The first edition took place from 6 to 21 August 1932 on the terrace of the Hotel Excelsior on the Lido di Venezia.

The first Esposizione Internazionale d'Arte Cinematografica, as it was called at the beginning before taking the name Mostra in 1934, was held from 6 to 21 August 1932, on the terrace of the Hotel Excelsior on the Lido di Venezia.

This fortunate and significant anniversary – which commemorates the advent of the oldest film festival in the world, a model to follow and imitate, as has in fact been the case since the end of the second World War – will be celebrated by La Biennale di Venezia with a series of initiatives.

The first will be an international conference to be held on Saturday 9 July 2022 in the Library auditorium of the Historical Archives at the Giardini della Biennale, which will open with the presentation of the Italian edition of the monumental History of the Venice International Film Festival, the new work of one of the most prestigious historians of Italian cinema, Prof. Gian Piero Brunetta. The publication, a product of the collaboration between the publisher Marsilio and La Biennale, will be followed by the English edition of the book curated by La Biennale itself, in time to be presented at the next Venice Film Festival in September 2022.

The international conference to be held on 9 July, in two distinct and complementary sessions (morning and afternoon), will on the one hand invite historians, critics and academics to reflect upon the value of the historical experience of the Venice International Film Festival. On the other, it will gather – from the live voices of some of its most authoritative protagonists – personal accounts, recollections, anecdotes and emotions that will compose a mosaic of memories no less significant for the reconstruction of the glorious adventure that is the Venice Film Festival.

The July 9 conference will conclude with the screening of one film included in the line-up of that first edition of the Venice Film Festival in 1932.

Furthermore, Ca’ Giustinian (headquarters of La Biennale) will host a temporary exhibition dedicated to the first edition of the Venice Film Festival, open to the public starting in July, and consisting primarily of materials from the Historical Archives of the Contemporary Arts – ASAC.