The interaction of instrumental music, electronics, video, dance and live painting in a performance conceived on the basis of principles of absolute freedom in which the integration of different creative dimensions is manifested in an essential unity: the multi-media opera La vallée des merveilles produced in collaboration with the Hanatsu Miroir ensemble. 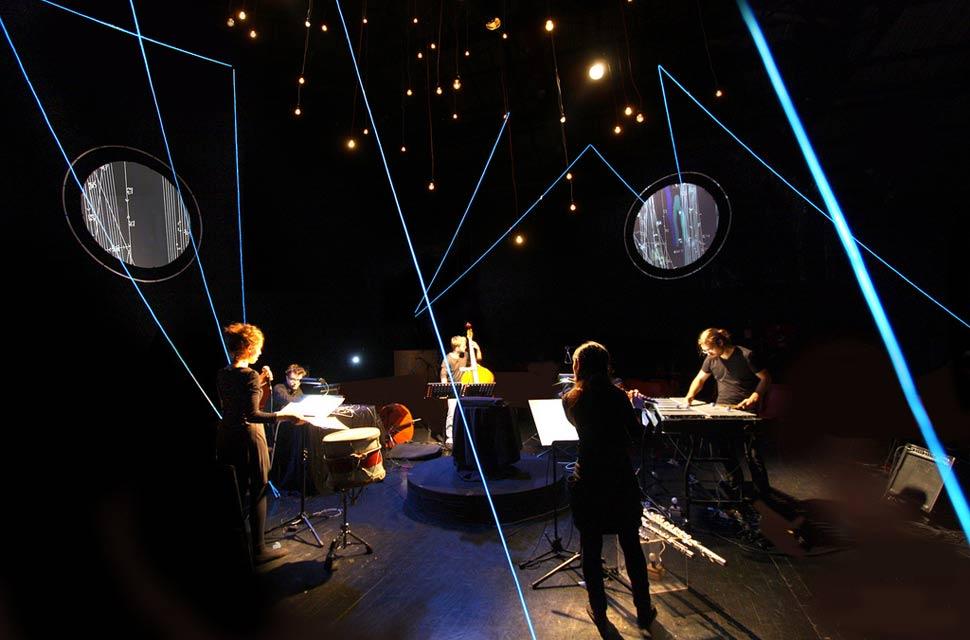 The territory on the border between Piemonte and Provence in the Department of the Maritime Alps has been alternately Italian and French, and it was not until 1947 that the political geography of these territories became stable. A distant land, difficult to Christianize for both nations, over time the “Valley of Marvels” became a “middle-land” for brigands, witches and fortune-hunters of all kinds; the village shepherds fought constantly for the control of pastures and resources. The legends of this Valley feature mainly esoteric heroes (the word “marvels” stands for “incantations”). Inhabited since prehistoric times, the mountains of the Valley are filled with petroglyphs from the Copper Age. This wealth of pagan culture has fuelled stories and legends that have been collected in a book by Jacques Drouin, which inspired the poetic writings of Sébastien Hoffman on which the new version presented in Venice is based (the original version of the work was created in Strasbourg in 2016).

A series of pieces for different ensembles tells the seemingly abstract stories of the characters who animate the legends of the Valley; a narrating voice recites the poetic texts, thereby providing objective reference for the representation of the characters. The Hanatsu Miroir collective is distinguished by its amalgam of instrumental music, electronics and artistic resources – from video to lighting to dance and live painting – and this expressive richness makes it possible to outline a form of composition that is neither opera nor musical theatre but somewhere between chamber music and theatre, opening a new space for contemporary creativity. In the quest to explore an interdependent relationship between the various artistic fields at work, so that none of them can forego the others, the music is founded on strategies that enhance the interaction between the instruments, the amplification and the real-time electronic elaboration.

The set design also works as an acoustic resource to enrich the digital sound during the performance. Based on anamorphoses (the projection of bodies modified to the point that they become unrecognizable), the sets consist of a device on which the video blends with the real reflections of the performers, and a play of lights created ad hoc multiplies the live painting with these reflections to fill the entire space. A microphone receiving device makes it possible to include some actions as sources for the digital sound elaboration.

Border areas are especially fascinating, when the cross-pollination of traditions creates an undefined territory between two defined territories. The border between France and Italy thus becomes the contended border between instrumental music and electronic music, between chamber music and theatre, between concert and performance. There is no need to take sides: La vallée des merveilles is a tribute to moving boundaries, to the equilibrium of being one and the other.