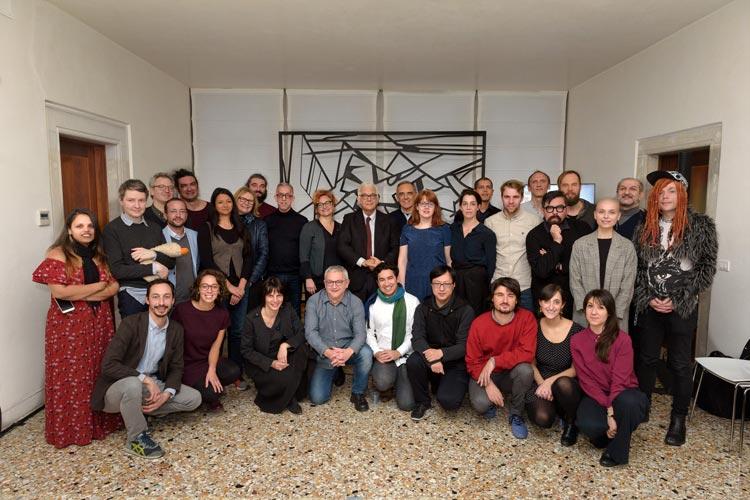 The 9 projects participated in the first workshop of the 2nd edition from 13th-19th January 2018.

La Biennale di Venezia announces the presentation of the 9 projects that participated in Venice, from January 13th to 19th 2018, in the first workshop of the 2nd Biennale College – Cinema Virtual Reality (2017-2018). The session will be introduced, on Friday January 19th 2018 in Venice at the headquarters of the Biennale at Ca’ Giustinian, by President Paolo Baratta and by the Director of the Cinema Department, Alberto Barbera.

Biennale College – Cinema Virtual Reality is a recent project developed by the Biennale di Venezia with the aim of exploring the most innovative and exciting technology of the moment: Virtual Reality. A maximum of 3 teams composed of a director and a producer will be selected to work on the development of virtual reality projects up to 30 minutes long.

The international call of the 2nd edition

The international Call for the Biennale College – Cinema Virtual Reality was launched on September 3rd 2017.

The first workshop of the 2nd edition

The 9 teams that authored the selected projects (composed of a director and a producer), from Argentina, Brazil, China, France, India, Italy and Russia, participated in the first workshop held in Venice from January 13th to 19th 2018.

Presentation of the 9 projects

In a session scheduled to take place from 3:30 pm to 6:00 pm on Friday January 19th 2018, the 9 teams presented their projects, offering a brief account of the various aspects involved in the creation of their stories, of their personal careers, their specific influences and their vision of Virtual Reality.

At the end of February, 3 VR projects will be selected, each of which will receive a contribution towards production up to a maximum of € 60,000 thanks to the support of SONY, and be presented at the 75th Venice International Film Festival 2018 in the Venice Virtual Reality section, instituted with great success in 2017.

In the Cave (Italy) - Ivan Gergolet (director) | Antonio Giacomin (producer)
In a cave full of beauty and mystery nothing is as it seems. By exploring its wonders and finding the way out, the audience will experience an allegoric journey in the search of life and rebirth.

Psychopompos (Italy/ France) - Giulia Olivieri (director) | Fabrizio Polpettini (producer)
A soul's journey from nonbeing to being on the back of a giant bird that speaks and sings with the voice of Mongolian female throat singer Sainkho, based on traditional shamanic beliefs.

Meet Mortaza (France) - Josephine Derobe (director) | Oriane Hurard (producer)
Meet Mortaza revisits the odyssey of Mortaza Jami, a young Afghan, victim of a fatwa eight years ago. A story told across different locations, from Kabul to Paris, in which the user is transported into the heart of Mortaza’s journey. Meet Mortaza is a carnal and poetic vessel in 3DVR, involving the audience in an intimate, deep encounter.

VRtigo (France) - Marc Guidoni (director) | Joanna Szybist (producer)
A lost soul wanders, trapped in the elevator of a luxury hotel, trying desperately to find a way to free itself.

Lightspeed VR (Russia) - Anton Outkine (director) | Sergey Kornikhin (producer)
Alex, a Russian space suit engineer from our time, finds himself ejected into space inside a malfunctioning space suit in 22th century. Alex has to break his denial and gain the trust of a hostile AI ship carrying what remains of humankind in time to escape the Sun that is about to go supernova.

A City of Foxes (India) - Nihaarika Negi (director) | Ishita Gandhi (producer)
An intimate and tender approach to immersive storytelling through VR that allows the audience to have an interactive encounter with a philosophical fox that questions what companionship means in times of loss.

Deep Clot (Brazil/China) - Mauricio Osaki (director) | Aihui Dong (producer)
Elderly self-retired vampire is forced back into business, when the hospital where she was working on, undergoes a modernization process.

Biennale College Cinema – Virtual Reality is made possible by a grant from SONY and the Creative Europe - MEDIA programme and enjoys the collaboration of the TorinoFilmLab.

For the 2017/2018 edition, the Biennale College – Cinema and the Biennale College – Cinema Virtual Reality projects have received generous funding from the MEDIA - Creative Europe Programme of the European Commission – General Direction Connect. The educational activities of the 2017 – 2018 edition will enjoy the support of the MEDIA funding. This funding is in addition to the support received from the MEDIA Programme for the development of the Venice Production Bridge.

Biennale College – Cinema, organized by the Biennale di Venezia, is supported by the Ministry for the Cultural Heritage and Activities. Biennale College – Cinema enjoys the academic collaboration of IFP in New York and the TorinoFilmLab, and continues its academic collaboration with the Busan International Film Festival. Furthermore, the project for the 2017-2018 edition is supported by Condé Nast. The Director is Alberto Barbera, the Head of Programme Savina Neirotti.

The three projects were developed entirely as part of the Biennale College Cinema VR. Chromatica was funded by La Biennale di Venezia with the support of SONY.