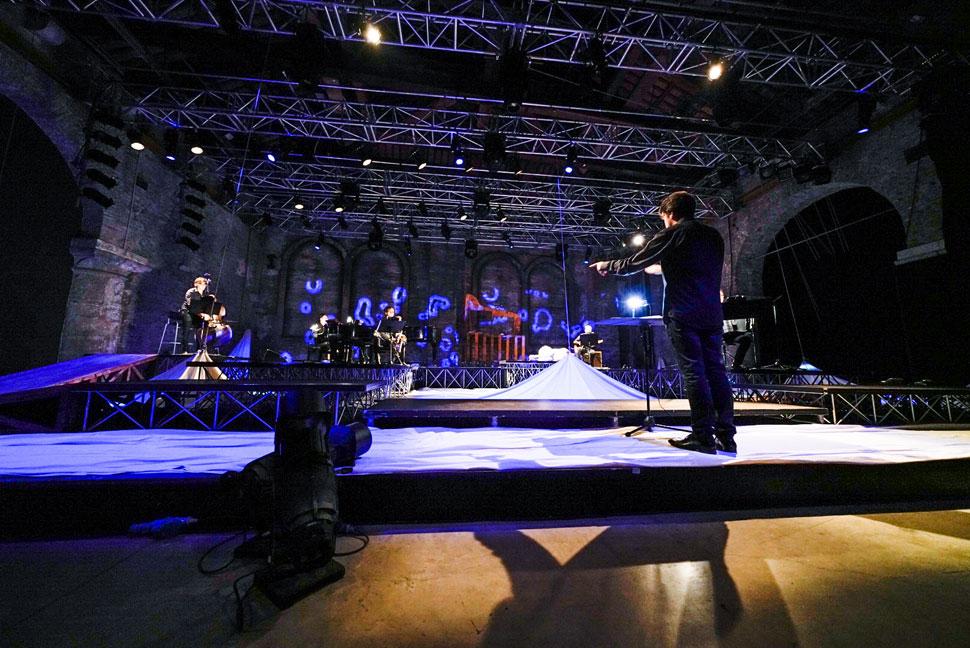 The concert features two new works by Filippo Perocco and Lucia Ronchetti, two of the most widely recognized voices in contemporary Italian music, performed by the L'arsenale ensemble, winner of the 2016 Abbiati prize, conducted by Perocco himself. Two new pieces commissioned by the Biennale, two independent works that share a common matrix in “theatre” with texts by Russian-American poet and essayist Eugene Ostashevsky, in addition to the contributions of Antonino Viola and Antonello Pocetti for the set design and direction.

“Even when you follow a course you have established you sometimes run into something you had not planned on. These are pleasant coincidences that, if you take advantage of them, can ramify the perspective of a piece.
It happened this time too for Come foglia opaca. The Feeling Sonnets by Eugene Ostashevsky, which emphasized a deliberately inexact English language, are followed by a series of random readings of various authors that always lead me back to the concept of a deformed and sometimes contradictory use of words, or more in general, of any means of expression.
Everything is seen as a faded object. The third and fifth sonnets, from which I have borrowed some excerpts, talk about hands but this is only one of the possible interpretations. A sort of illusion.
They seem to ask: ‘How can you express emotions in a language that is not yours?’ Any fragile or ambiguous attempt encloses a primal force within it. The work lets itself be guided by this uncertainty (...)”. (Filippo Perocco)

“The Pirate Who Does Not Know the Value of Pi is a poem by Eugene Ostashevsky, published by the “New York Review of Books” in 2017. The relationship between the Pirate and the Parrot, their misadventures and the final shipwreck on a desert island are the subject and inspiration for a poetic analysis of linguistic cryptography. The writer creates a verbal labyrinth of sounds and meanings through rapid changes of stylistic textures, rhythmic metamorphoses, extreme plays of language that generate a sense of the absurd that is both grotesque and comic. (...)
The musicians in the ensemble create nine sound scenes with extreme instrumental virtuosity, while they also serve as actors, performers in an improvised a cappella choir and ensemble of poor and random percussions. The open piano at the center of the stage is their boat shipwrecked on the island: a sonic wreck, a memory and derelict monument of a heroic past that cannot return.” (Lucia Ronchetti)