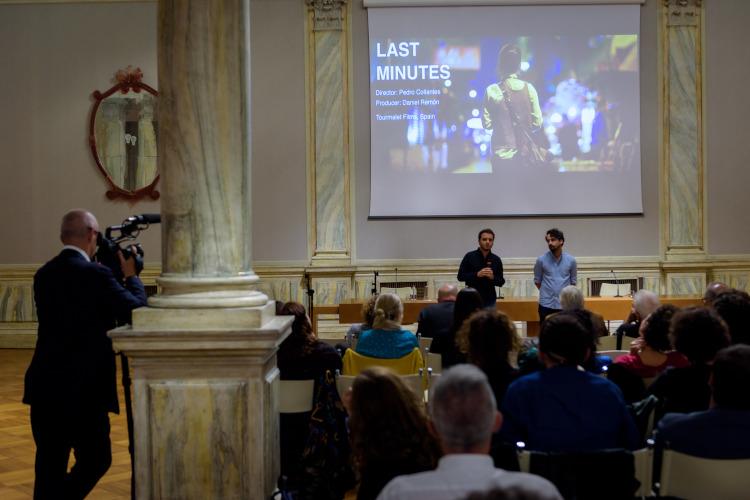 The 4 projects selected for the Biennale College Cinema 2019/2020

The projects for the final phase are Fucking with Nobody by Hannaleena Hauru, La Santa Piccola by Silvia Brunelli, Last Minutes by Pedro Collantes, and Mon Père, Le Diable by Ellie Foumbi.

The selected projects are from Finland, Italy, Spain, USA. Through Friday, December 6th, they will participate in the first of two workshops in Venice.

The 4 projects of the eighth edition

Four projects have been selected to move on to the production phase for the films of the 8th edition (2019/2020) of the Biennale College Cinema. The teams, consisting of a director and a producer, will be participating in Venice today through Friday December 6thin the first of two workshops. As announced, the new feature of this edition of the Biennale College Cinema is that the number of films to be supported by La Biennale has been increased to four projects, of which at least two must be by women directors.

The four projects were chosen subsequently to the first workshop for the 12 projects selected from around the world (coming this year from Australia, Brazil, China, Finland, France, Italy, Macedonia, Portugal, Spain, and United States).

The following are the four projects listed in alphabetical order by title:

The following is a brief description of the 4 projects:

Fucking with Nobody – The lives of 5 characters working the Finnish Film Industry cross paths through one fake marriage project.

La Santa Piccola – Three teenagers live in a sunny neighborhood in Naples, with their tiny life dreams. There is also a baby girl whom everyone calls “the holy baby” because she sees the Virgin Mary. She could be the one who brings a miracle to make their dreams come true, but that hope is just a lie that will end with the summer, as the neighborhood awaits another new saint to believe in.

Last Minutes – This is the story of four different encounters that take place minutes before someone’s departure from life. Each of these encounters happens to be the last human interaction of one of the characters before leaving this world. Unknowingly at death’s door, the characters who populate the film experience rage, love, lust, tenderness, greed or empathy, witnesses to the blissfully ignorant passage of time towards death.

Mon Père, Le Diable – An antisocial African refugee’s quiet existence in a sleepy mountain town in the south of France is upended when she suspects that the new priest at her church is the warlord who slaughtered her family.

The 4 chosen teams will then participate in another workshop scheduled for the month of January 2020, that will lead to the possibility of actually making the four micro-budget films, funded with a grant of 150,000 euro each, to be presented at the 77th Venice International Film Festival.

Biennale College Cinema enjoys the support of Eurimages, the cultural fund of the European Council, which covers the costs of travel, hospitality and training for a woman director (Eurimages Residency Grant).