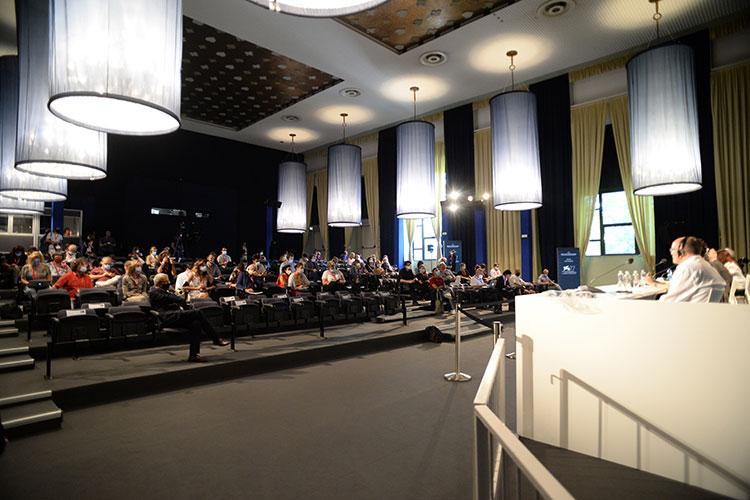 The Panel takes place in the Press Conference Room at 4 pm on Sunday 6th September, chaired by Peter Cowie.

The Biennale College Cinema scheme is exciting chiefly because it is in essence a workshop – a workshop that places the focus squarely on two essential themes: the making of low-budget films in a period of global recession, and the need to find youthful auteurs if the cinema is to be reinvigorated.  The selection criteria involve the originality of the idea, and also the quest for a new or inventive film language.

This year, due to the extraordinary circumstances which have affected every aspect of film production and post-production, only two of the four commissioned feature films have been completed in time for their world premiere at the Mostra. The panel will therefore discuss both The Art of Return and Fucking with Nobody, which are being screened in the festival this week.

The big question remains: can these new films now enjoy a future on the international stage? There is always the challenge of securing distribution and exhibition for such movies beyond a coterie of film festivals.  So, how successful have they been in the eyes of our panel? We're delighted that our panellists have had the courage to make their way to Venice, from Finland, from France, from Germany, and of course, as always, from Italy in the person of Savina Neirotti.

Peter Cowie, moderator
In 1963, Peter Cowie launched the annual International Film Guide, which appeared under his editorship for 40 years. He has written more than 30 books about film, including biographies of Welles, Bergman, Kurosawa and Coppola. Among the publications he has written articles for are The New York Times, The San Francisco Chronicle, The Los Angeles Times, the London Sunday Times, The Wall Street Journal, Le Monde, Expressen, Neue Zürcher Zeitung, and Sight and Sound. He was International Publishing Director of Variety from 1993 to 2000. Cowie has contributed more than a dozen commentaries for Criterion DVD’s. In 2018 he was commissioned by La Biennale di Venezia to write  Happy 75: A Brief Introduction to the History of the International Film Festival.

Sara Ehnholm Hielm
Sara Ehnholm Hielm has been a film critic in Helsinki, Finland since 1995, and since 2000 for Hufvudstadsbladet (the main Swedish-speaking daily in Finland). She is also a book publisher, has written an essay collection "And the heart was mine" and had a play performed by two theatres in Helsinki, entitled The Winter War. Here We Go Again.

Pierre Eisenreich
Pierre Eisenreich has been a film critic and member of the editorial board of the magazine Positif for twenty years. He is also an editor for Encyclopaedia Universalis. Between 2013 and 2017, he moderated and participated in the programme of the screening-debates of the Ciné-Rencontres de Prades. Previously he programmed the German Film Festival in Paris from 2000 to 2007. He was also a member of the Occitanie Cinéma Reading Committee for feature and short film scripts. With Tamasa Distribution, he recently co-edited the DVD People on Sunday and the DVD box set dedicated to Georg Wilhelm Pabst.

Jessica Kiang
Jessica Kiang is an International Film Critic for Variety, which has taken her to film festivals and events on almost every continent. Features Editor at The Playlist for five years, she still contributes regularly there, as well as writing for Sight & Sound, BBC Culture and the BFI, among other outlets, most recently The New York Times. She was a mentor at the 2018 Melbourne Film Festival Critics Campus and has served on festival juries from Iceland to Egypt to Austria, most recently adjudicating the Platform competition at the 2019 Toronto International Film Festival.

Savina Neirotti
Born in Genoa, she graduated in Philosophy and completed the first year of a Master's in Aesthetics at the University of Pennsylvania. She later became Head of the Press and Communication Office of the Orchestra Sinfonica Nazionale della RAI, where she was also in charge of the Educational Department. In the same period she was among the co-founders of Scuola Holden, a school for storytellers in Torino together with Alessandro Baricco. She became Scuola Holden’s CEO from March 2018. Since 2005 she has conceived and been in charge of Script&Pitch Workshops and TorinoFilmLab. She has headed the Biennale College Cinema programme since its inception in 2012, and the Biennale College Cinema Virtual Reality since 2017. She is Content Curator for the Venice Production Bridge.

THE DIRECTORS OF THE BIENNALE COLLEGE CINEMA 2020

Hannaleena Hauru
Hannaleena Hauru, born in 1983, is a Finnish screenwriter and director. Her debut feature Thick Lashes of Lauri Mäntyvaara (2016) was developed in the Torino Film Lab and Cannes Cinéfondation Residency. Her earlier short films have premiered in the Cannes Critics’ Week, Berlinale Generation, and have won prizes at the Oberhausen, Uppsala and Tampere Film Festivals. She graduated from ELO Helsinki Film School, but is more known from her active participation in the Nisi Masa European Network of Young Cinema and the Kino Movement. Building dramaturgy and characters as an ensemble together with the crew and intersecting roles of actors also being cinematographers come from her theatre background.