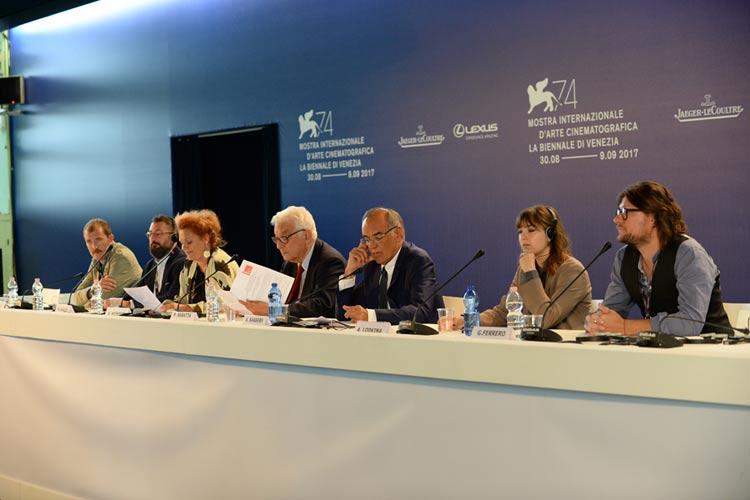 12 new projects have been selected for the 2017-18 edition. Call of proposals for the Biennale College Cinema VR.

Biennale College is an innovative and complex experience that engages every department of the Biennale di Venezia.

Biennale College – Cinema is the project that promotes new talents in cinema by offering them the opportunity to work closely with master filmmakers in the production of micro-budget films. 3 of these 12 projects will receive support in the amount of 150,000 Euro to produce a maximum of 3 feature-length films (debut or second film), one of which must be Italian, to be presented at the 75th Venice International Film Festival in 2018.

The 12 projects were announced during the press conference held on 3rd September, on the Lido di Venezia (Palazzo del Casinò), at the 74th Venice International Film Festival (30 August – 9 September 2017), directed by Alberto Barbera and organized by the Biennale di Venezia chaired by Paolo Baratta.

The 12 projects selected for the first phase of Biennale College – Cinema are:

The 12 projects were selected by the Director of the Venice Film Festival Alberto Barbera, with the help of the Biennale College – Cinema team, and will be documented on the website http://collegecinema.labiennale.org/en/.

At the close of the first workshop, which will be held in Venice from October 7th to 16th 2017, three teams will be selected and production will begin on 3 feature-length films (debut or second films), one of which must be Italian, which must be low-cost, will be funded in the amount of 150,000 Euro, and will be presented at the 75th Venice International Film Festival in 2018.

Biennale College – Cinema, organized by the Biennale di Venezia, is supported by the Ministry for the Cultural Heritage and Activities. Biennale College – Cinema, relies on the academic collaboration of the IFP in New York and of the TorinoFilmLab, and continues its collaboration with the Busan International Film Festival. The 2017-2018 edition of the project is supported by Condé Nast. The Director is Alberto Barbera, the Head of Programme Savina Neirotti.

During the press conference the second edition of the 2017/2018 Biennale College Cinema – Virtual Reality has been announced.

Submissions will open starting from September 4th until October 20th, 2017, on the website: http://collegecinema.labiennale.org/en/ where an online form has to be filled in.

Biennale College Cinema – Virtual Reality is a programme developed by La Biennale di Venezia to navigate the most innovative and exciting technology of today – Virtual Reality. In its approach to fully exploring the aesthetic and narrative opportunities offered by this new form Biennale College Cinema – Virtual Reality provides filmmakers and creative professionals from a wide range of backgrounds with the skills to prepare them to fully engage with 360° interactive immersive future. With the support of experts and international specialists in the field, Biennale College Cinema – Virtual Reality will help existing independent filmmakers and creative professionals from all over the world to appropriate the medium of VR and learn how to adapt their knowledge to VR in a fluid transitional way. In the process participants will acquire the specific know-how around 360° immersive storytelling that will redefine the relationship between story and audience.

Biennale College Cinema – Virtual Reality will select 3 director and producer teams to work on the development of VR projects of maximum 30 minutes of duration, at concept stage, helping them to advance their projects covering creative, production, audience/market and financial concerns. After a workshop to be held in Venice in January 2018 up to three VR projects will receive € 60,000 max each thanks to a grant from the Biennale di Venezia and the support of Sony Corporation and Sony Entertainment Inc., and will subsequently be presented at the 75th Venice International Film Festival in 2018.

Biennale College – Cinema Virtual Reality will receive essential financing from the Creative Europe-MEDIA programme and relies on the collaboration of the TorinoFilmLab.

The 2017/2018 edition of the Biennale College – Cinema and Biennale College – Cinema Virtual Reality projects, will receive essential financing from the European Commission – Connect Directorate General’s Media – Creative Europe Programme. The educational activities of the 2017-2018 edition will thus be funded by a MEDIA grant. This grant is in addition to the funding which the MEDIA Programme has given to the development of the Venice Production Bridge.