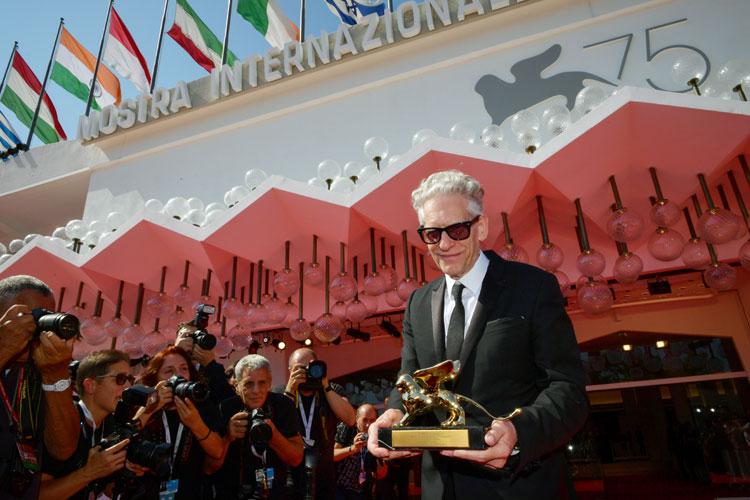 The acknowledgement to David Cronenberg to be presented on Thursday 6th September at the Palazzo del Cinema, 2:00 pm.

David Cronenberg will receive the Golden Lion for Lifetime Achievement for directors at the 75th Venice International Film Festival (August 29 – September 8, 2018).
The decision was made by the Board of Directors of the Biennale di Venezia, chaired by Paolo Baratta, who espoused the proposal made by the Festival Director, Alberto Barbera.

Accepting the award, David Cronenberg declared: “I’ve always loved the Golden Lion of Venice. A lion that flies on golden wings –that’s the essence of art, isn’t it? The essence of cinema. It will be almost unbearably thrilling to receive a Golden Lion of my own.”

The award will be presented to David Cronenberg on Thursday 6th September in the Palazzo del Cinema’s Sala Grande at 2:00 pm. (Admission: public - all pass holders). This will be followed by the screening of M Butterfly (1993) by David Cronenberg.

With regard to this prize, Alberto Barbera declared: “Although Cronenberg was originally relegated to the margins of the horror genre, right from his first, scandalously subversive movies, the director has shown that he wants to take his audiences well beyond the cinema of exploitation, as he constructs an original and highly personal structure, movie after movie. Revolving around the inseparable relationship of body, sex, and death, his universe is populated by grotesque deformities and terrifying couplings, a horror which reflects the fear of mutations inflicted on bodies by science and technology, of disease and physical decay, of the unresolved conflict between spirit and flesh. Violence, sexual transgression, confusion between what is real and what is virtual, the image’s deforming role in contemporary society: these are a few of the recurring themes which have helped make him one of the most daring and stimulating filmmakers ever, a tireless innovator of forms and languages.”

Director David Cronenberg’s reputation as an authentic auteur has been firmly established by his uniquely personal body of work which includes: Shivers, Rabid, Fast Company, The Brood, Scanners, Videodrome, The Fly, Dead Ringers, Naked Lunch, Crash, eXistenz, The Dead Zone, M. Butterfly, Spider, A History of Violence, Eastern Promises, A Dangerous Method, Cosmopolis and Maps to the Stars. In 1991, Cronenberg was nominated for the Silver Bear Award at the Berlin Film Festival for Naked Lunch and won this award in 1999 for eXistenZ. Cronenberg’s films Crash, Spider, A History of Violence and Cosmopolis have all been in competition for the Palme d’Or prize at the Cannes Film Festival. In 1996, Crash received a Special Jury Prize from the Festival. Most recently, in 2011, A Dangerous Method was nominated for a Golden Lion Award at the Venice Film Festival.

Frequently lauded as one of the world’s greatest and most influential directors, Cronenberg’s films have earned him critical praise and recognition internationally. In 1999, he presided over the Cannes Film Festival jury and in 2006, was awarded the Festival’s lifetime achievement award, the Carrosse d'Or. Collectively, his films have been nominated for seven Golden Globes; received BAFTA and France’s César Award nominations for A History of Violence and Eastern Promises; four Academy Award nominations; prizes from the Toronto International Film Festival, Directors Guild of Canada and Canada’s Genie Awards. Cronenberg’s short film, At the Suicide of the Last Jew in the World in the Last Cinema in the World, in which he also stars, was created for the Chacun son cinema collection of films commemorating the 60th anniversary of the Cannes International Film Festival. Other special commissions include Camera (2000), created for the 25th anniversary of the Toronto International Film (TIFF) and The Nest (2013) as part of TIFF’s David Cronenberg Evolution exhibition and retrospective.

In 2006, Cronenberg worked with the Art Gallery of Ontario as a guest curator for the exhibition, Andy Warhol/Supernova: Stars, Deaths and Disasters, 1962-1964. David created an innovative soundtrack audio guide with additional commentary by several of Warhol’s contemporaries. Further challenging himself outside the realm of film, David brought the opera of the The Fly to the stage for the Théâtre du Châtelet and LA Opera in 2008. Turning his hand to fiction in 2014, David debuted his first novel, Consumed. The inventive and disturbing work was mounted as a stage play by Theatre Bremen in 2015 and is currently being developed for television. Recognition of Cronenberg’s contribution to art and culture has included an appointment as an Officer to the Order of Canada in 2003, a Companion of the Order of Canada in 2014, investiture in France’s Order of Arts and Letters in 1990 and the Légion d’Honneur in 2009. Cronenberg was made a Fellow of the British Film Institute in 2011.