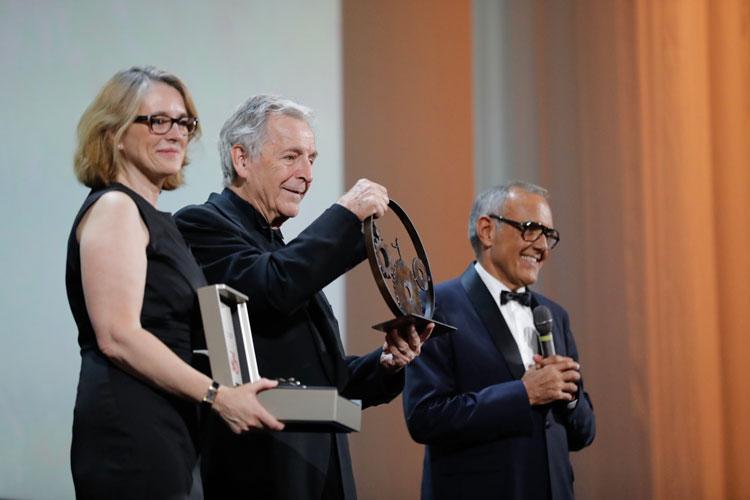 His new film Adults in the Room screens Out of Competition (31 August at 10:00 pm, Sala Grande theatre)

The Jaeger-leCoultre award to director Costa-Gavras

La Biennale di Venezia and Jaeger-LeCoultre are pleased to announce that the great Greek-born French director Costa-Gavras (Z, Missing, Music Box) is the recipient of the Jaeger-LeCoultre Glory to the Filmmaker 2019 award of the 76th Venice International Film Festival (28 August - 7 September 2019), dedicated to a personality who has made a particularly original contribution to innovation in contemporary cinema.

The award ceremony for Costa-Gavras will take place on Saturday August 31st 2019 in the Sala Grande (Palazzo del Cinema) at 10 pm, before the world premiere screening Out of Competition of the new film he wrote and directed, Adults in the Room (France, Greece, 124') with Christos Loulis, Alexandros Bourdoumis, Ulrich Tukur.

With regards to this acknowledgment, the Director of the Venice Film Festival Alberto Barbera has stated: “There are many reasons why Costa-Gavras deserves to be counted among today’s great directors, but there is one reason in particular. He is able to turn politics into a fascinating topic, a subject like any other, not just for the initiated and already convinced few, but as well for the greater public, using every means at cinema’s disposal in order to touch the greatest number of spectators possible. This director, reserved yet determined, has always held that all movies are political. This not only enables him to dodge the label of political director, which has always been attached to him – often in a polemical and reductive manner – but also to claim a peaceful and sincerely democratic faith in a type of mainstream cinema that makes the viewer reflect and question, and also sparks deep emotions. Thanks to the intrinsic, authentic indignation of his movies, to the deep humanism that characterizes them, and to the freedom they demand, Costa-Gavras calls into question our weaknesses and our submissiveness. It has been said that, “if we have fallen asleep, his cinema wakes us up. And if we have lost hope, his films restore it to us.”

Behind closed doors, a human tragedy plays out. A universal theme: a story of people trapped in an inhuman network of power. The circle of the Eurogroup meetings, who impose on Greece the austerity, where humanity and compassion are utterly disregarded. A claustrophobic trap with no way out, exerting pressures on the protagonists which finally divide them. A tragedy in the Ancient Greek sense: the characters are not good or evil, but driven by the consequences of their own conception of what it is right to do. A tragedy for our very modern time. Adults in the Room is based on the book Adults in the Room: My Battle with Europe’s Deep Establishment, by Yanis Varoufakis.

Jaeger-leCoultre Glory to the Filmmaker award

In keeping with the inventive spirit of its founding, Jaeger-LeCoultre has been driven by a quest for excellence. Sharing many values with filmmaking, its Manufacture based in the "Vallee de Joux", in Switzerland, has made watchmaking an art form, balancing technical and artistic skills.

The 76th Venice International Film Festival will be held on the Lido from August 28th to September 7th, 2019, directed by Alberto Barbera and organized by La Biennale chaired by Paolo Baratta.

Costa-Gavras was born in 1933 in Loutra-Iraias (Greece). At 22 years old he left Greece as an economic migrant to study in Paris. He enrolled at the Sorbonne University before being admitted to the National Institute of Film (IDHEC). After graduating he worked as Assistant Director alongside eminent French directors René Clair, René Clement, Henri Verneuil, Jacques Demy, Marcel Ophüls, Jean Giono and Jean Becker. In 1965 he directed his first feature film, Compartiment tueurs. His subsequent films were huge successes: Z won two Oscars in 1969, two awards at the Cannes Film Festival and dozens more awards. Through his political films, Costa-Gavras has tackled burning issues of the era and has continued his work between France and the United States, directing 20 films, including Un homme de trop, Section Spéciale, Missing (Palme d’Or and Best Actor for Jack Lemmon in 1982), Hanna K, Betrayed, L’Aveu, État de siège, Clair de femme, Conseil de famille, La petite apocalypse, Mad City, Music Box, Amen, Le Couperet, Eden à l’Ouest, Le capital.
Costa-Gavras is married to Michèle Ray since 1968. They have three children: Alexandre, Julie and Romain. Alexandre is a producer, Julie and Romain are film directors. In 2018 he published his autobiography Va où il est impossible d’aller. Since 2007, he has been President of the Cinémathèque Française.