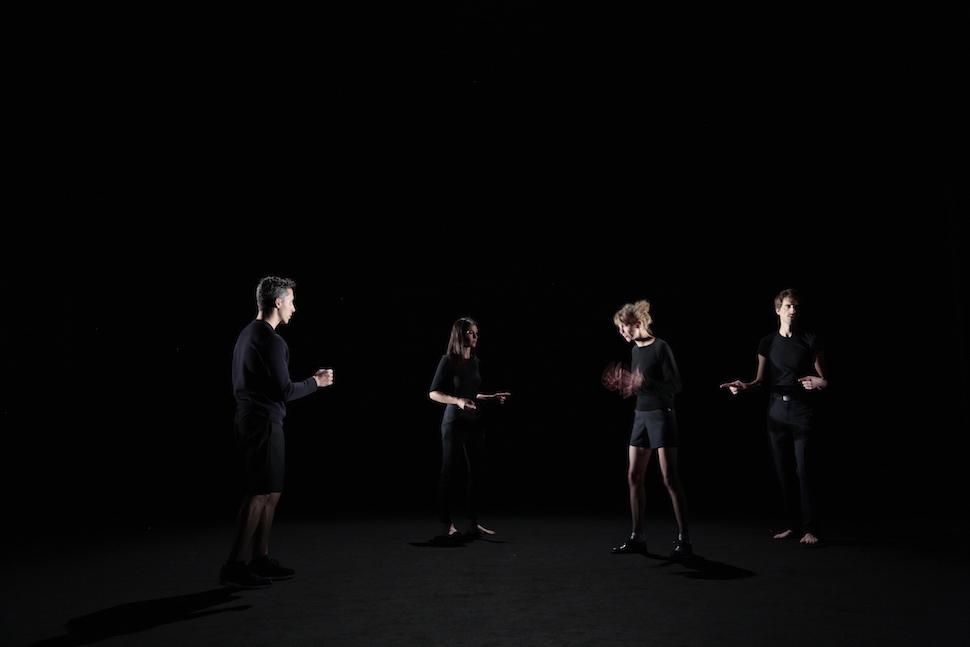 Ensemble Ensemble responds to the desire to accompany one’s existence with a multiplicity of presences, be they real, fictional, endured or summoned. Or how places and bodies produce thought, how to give body to a voice, a voice to thought. The question of identity, of how it is built, appears throughout the pièce, pervaded, again, by the figure of the double. The stage is structured by four performers – three of whom are dancers by training – who through their movements, actions and positions, define the moving spaces that allow the word to circulate. Places and persons blur, respond to one another, beaches of sound and musical compositions punctuate the pièce, reconfigure the places. Ensemble Ensemble follows the tracks of a woman who tries to give names to what surrounds her. Monologues and dialogues entwine, the figure of the couple sees the light of day, fades, inexorably returns with, in filigree, the need to understand what drives an individual to talk about himself, be it in private, in public, orally or in writing. The notion of double unfolds further along, in dialogues between Toi and Moi. Special attention is focused on the circulation of the word thanks to a prince of dubbing, live: two performers speak, two others physically take charge of their voices. The figure of the couple – in the widest sense – inexorably returns under different forms. Words and music circulate among the performers, create movement, listening, silence. The harpsichord, which accompanies the pièce from the beginning to the end, places it within a wider relationship with time, with the music by Baroque composers (J.N.P. Royer, J. Kapsberger, A. Lotti, A. Vivaldi, M. Marais, F. Couperin) or the group The Noise Consort. Ensemble Ensemble seeks to reconcile reality and fiction, proposes to transform the difficulty of capturing our environment univocally, in an ode to multiplicity: multiplicity of the body, of actions, of thoughts.