The avant-garde work at the Art Exhibition​ in '48, the Golden Lions of the 60s, the '68 and the New Statutes.

On 26th July, the Parliament approved the Organisation's new statute. A "democratic" Board was set up (19 members), comprising representatives from the Government, the most important local organisations, major trade unions, and a representative of the staff. The Board was to elect the President and nominate the Sectorial Directors (Visual arts, Cinema, Music, Theatre). The Music Festival was no longer held annually. During the year in which the Mostra del Cinema was not held, there was a series of "Giornate del cinema italiano" (Days of Italian Cinema) promoted by sectorial bodies in campo Santa Margherita, in Venice.

For the first time, the International Art Exhibition had a theme (as also in following years): "Opera o comportamento" ("Work or Behaviour"). Music Festival: world premiere of Sylvano Bussotti's Lorenzaccio.

Following the protests, no awards were presented. These resumed in 1980 for the Mostra del Cinema and in 1986 for the Art Exhibition.

Student protests hindered the opening of the Biennale. A period of institutional changes opened, ending up with a new Statute (1973).

The Art Exhibition introduced Europe to Pop Art: the Americans exhibited in the building that used to house the US consulate at San Gregorio. Robert Rauschenberg was the first American artist to win the Gran Premio, and the youngest to date. Mostra del Cinema: Golden Lion to Il deserto rosso by Michelangelo Antonioni.

Informal art was given an airing at the Art Exhibition with Fautrier, Hartung, Vedova, and Consagra. Mostra del cinema: Golden Lion ex aequo to Ivanovo Destsvo by Andrei Tarkovsky and Cronaca familiare by Valerio Zurlini.

The exhibition of Giovani artisti italiani e stranieri (Young Italian and foreign artists) was presented within the Art Exhibition that year. Baj, Crippa, Dorazio, Scanavino and Jasper Johns were exhibited. An award went to Chillida. Theatre Festival: a lively debate was provoked by the pièces of Eugène Ionesco and Samuel Beckett.

On 28th October, the government removed the Board of directors following protests on the part of the municipal council for the replacement of Rodolfo Pallucchini. Golden Lion to Satyait Ray's Aparajito which introduced Indian cinema to the West.

At the Mostra del Cinema, the films were admitted to the competition following an artistic selection and no longer based upon the designation of the participating countries. World premiere of Canticum sacrum by Stravinsky in the Basilica di San Marco.

The island of San Giorgio provided the venue for the first Japanese Nô theatre shows in Europe. Mostra del Cinema: in competition, La strada by Fellini (Silver Lion) and Senso by Visconti. Music Festival: world premiere of Benjamin Britten's The Turn of the Screw.

The government nominated the new Board of directors, the first since the war. Mostra del Cinema: Golden Lion to Rashomon by Akira Kurosawa, which revealed Japanese cinema to the West for the first time. The Premio Volpi was renewed, and from the following year was once more called the Coppa Volpi. The first winners were Jean Gabin and Vivien Leigh. At the International Festival of Contemporary Music, Stravinsky's The Rake's Progress was given its world premiere.

The Arena at the Lido was enlarged and given its definitive arrangement. The Leone di San Marco, later renamed the Leone d'oro (Golden Lion) was created for the first time and awarded to Manon by Henri-George Clouzot.

Under Pallucchini, the Art Exhibitions became an observatory on contemporary art and avant-garde work. Awards were given to Braque (1948), Matisse (1950), Dufy (1952), Ernst and Arp (1954). In 1950, the US pavilion presented works by Pollock, Gorky and, for the first time, De Kooning (in 1954 he returned with 27 paintings). Alexander Calder, in 1952, was the first major American artist to win the Gran Premio di Scultura.

The International Art Exhibition reappeared - the first following the war and the fall of fascism - with a major exhibition of a recapitulatory nature. The Secretary general, art historian Rodolfo Pallucchini, started with the Impressionists (proposed by Roberto Longhi) and many protagonists of contemporary art (Chagall, Klee, Braque, Delvaux, Ensor, Magritte). A retrospective of Picasso's work was presented by Guttuso. Pallucchini invited Peggy Guggenheim to exhibit her famous New York collection, which subsequently found a home at Ca' Venier dei Leoni and became one of the cultural treasures of modern Venice. Film festival: Gran Premio Internazionale to Laurence Olivier's Hamlet. 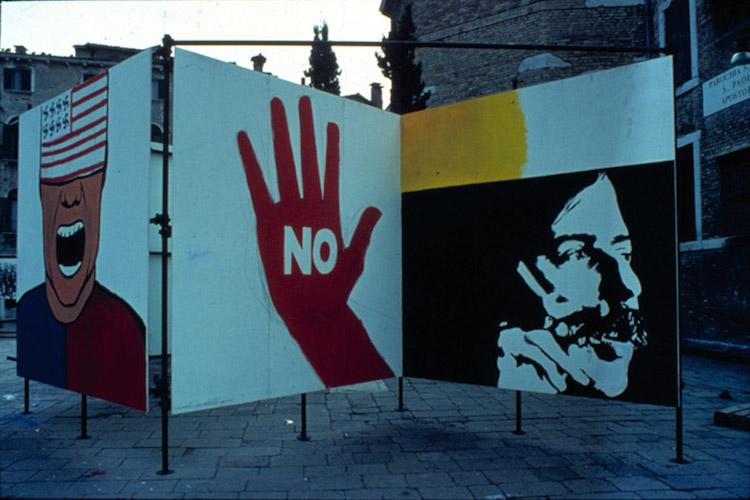 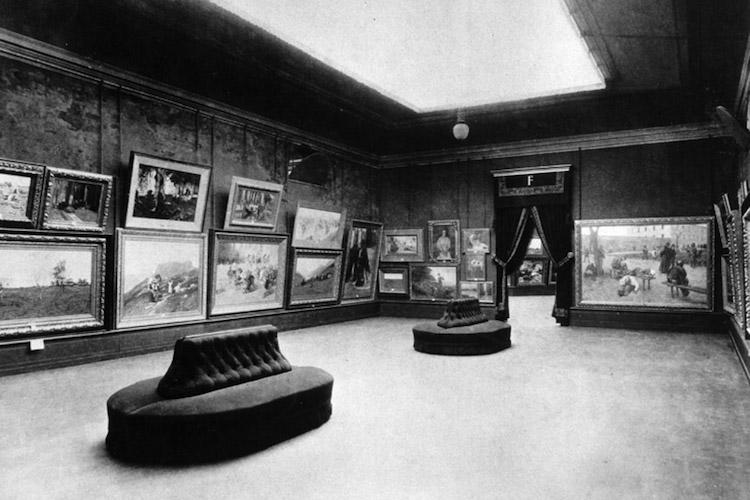