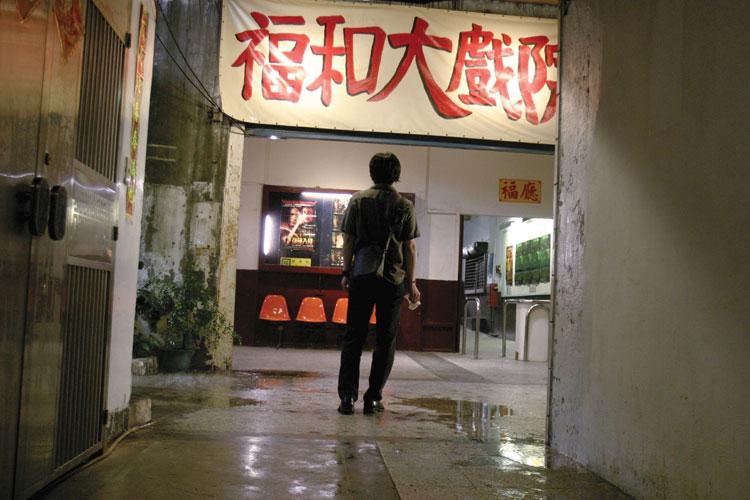 Special Event of the Venice Film Festival at the Biennale Arte: Tuesday 3 September, 11 am and 3 pm, Teatro alle Tese, Arsenale.

In the spaces of the 58th International Art Exhibition, at the Teatro alle Tese in the Arsenale on Tuesday September 3rd, Taiwanese director (Golden Lion) Tsai Ming-liang will present his works.

The restored version of the masterpiece Bu san (Goodbye Dragon Inn) (82') by Tsai Ming-liang, presented, which was presented in Competition at the 60th Venice Film Festival in 2003 and won the international critics' award, will be screened twice at the Teatro alle Tese in the Arsenale (11 am and 3 pm), followed by a Live Performance by the director himself titled Improvisations on the Memory of Cinema (12:30 pm and 4:30 pm).

Starting with the making of the film Bu san in 2003, Tsai Ming-liang’s work appears progressively to be oriented towards redefining the traditional boundaries of cinema, and becomes increasingly entangled with the directions of contemporary art.

The event will be open – even to the visitors of the Biennale Arte – upon purchase of an admission ticket from the Arsenale Ticket Office (Campo della Tana), 10 am - 6 pm.
Tickets: public € 10, Venice Film Festival pass holders € 5.

Tsai Ming-liang
He is one of the leading figures in New Cinema in Taiwan. The winner of many international awards, he was awarded the Golden Lion in Venice in 1994 for Vive L'Amour.

Bu san (Goodbye Dragon Inn)
Synopsis
The night before an old movie theatre is to close, despite the driving rain, a young Japanese man runs to the cinema which seems empty, lifeless. On the screen, the classic film by King Hu Dragon Inn. As he enters the theatre, the young man runs into someone who looks exactly like the swordsman on the screen. Is this a real person or a spirit who doesn't want to go away?

The 76th Venice Film Festival will be held on the Lido from August 28th to September 7th 2019, directed by Alberto Barbera. The 58th International Art Exhibition, titled May You Live in Interesting Times, curated by Ralph Rugoff, is being held in the Giardini and at the Arsenale through November 24th 2019. Both are organized by La Biennale di Venezia chaired by Paolo Baratta.

Born in 1957 in Kuching, Malaysia, he moved to Taiwan in 1977 to study film. His film Qing shaonian nezha (Rebels of the Neon God) made in 1993 won an award at the Tokyo Film Festival. Winner of the Golden Lion in Venice in 1994 for Vive L'Amour, Tsai Ming-liang later won the Grand Jury Prize in Venice in 2013 for Jiao you (Stray Dogs), after various other nominations including for the Palme d'Or at the Cannes Film Festival. In 2015, he returned to the Lido with the documentary Na ri xiawu (Afternoon), presented out of competition, and in 2017 to participate in the new section dedicated to Virtual Reality with Jia zai lanre si (The Deserted). Tsai Ming-liang is the first director in China to have made a Virtual Reality film. In 2018 he presented, Out of Competition in Venice, the film titled Ni de lian (Your Face), a documentary akin to art.