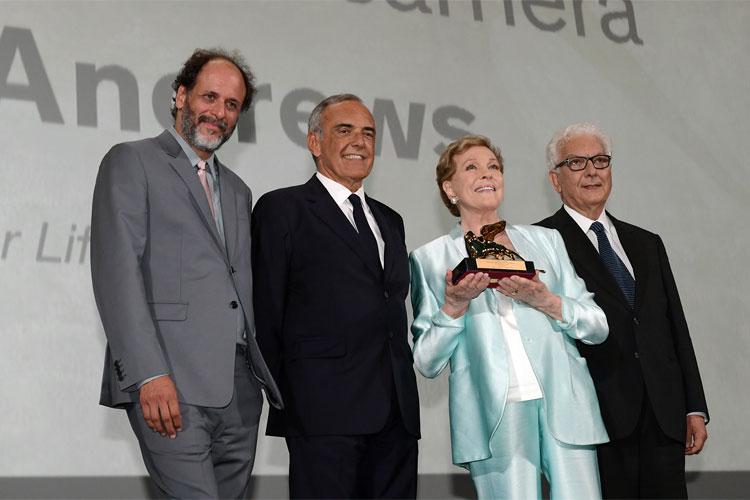 The honour was presented to the great English actress on Monday 2 September in the Sala Grande theater at the Palazzo del Cinema.

The Golden Lion for Lifetime Achievement of the 76th Venice International Film Festival has been awarded to the great English actress Julie Andrews, the star - among her many international successes - of classic movies beloved all the world over, such as Mary Poppins (1964), The Sound of Music (1965), and Victor Victoria (1982), among many others.
The decision was made by the board of the Biennale di Venezia, chaired by Paolo Baratta, which espoused the proposal made by the Director of the Festival, Alberto Barbera.

Julie Andrews, accepting the proposal, declared:  “I am so honored to have been selected as this year’s recipient of the Golden Lion for Lifetime Achievement.  The Venice Film Festival has long been recognized as one of the world’s most esteemed International Film Festivals. I thank La Biennale for this acknowledgement of my work and I look forward to being in that beautiful city in September for this very special occasion.”

On the occasion of the Golden Lion for Lifetime Achievement award ceremony, A Conversation with Julie Andrews is scheduled on Tuesday 3 September (3 pm, Sala Perla 2), hosted by Giulia D’Agnolo Vallan.
Access: public* (*please collect the free coupon at the ticket offices) - all pass holders.

Regarding this award, Alberto Barbera declared: “At a very young age, Ms Andrews made a name for herself in the music halls of London and, later, on Broadway thanks to her remarkable singing and acting talent. Her first Hollywood movie, Mary Poppins, gave her top-tier star status, which was later confirmed in another treasured film, The Sound of Music. Those two roles projected her into the Olympus of international stardom, making her an iconic figure adored by several generations of moviegoers. Above and beyond the different interpretations that can be given to her two most famous films (and highlighting the transgressive value of her characters rather than their apparent conservatism), it must be remembered that Andrews went out of her way to avoid remaining confined as an icon of family movies. She accepted roles that were diverse, dramatic, provocative and imbued with scathing irony. For example, The Americanization of Emily by Arthur Hiller, and the many movies directed by her husband Blake Edwards, with whom she formed a very profound and long-lasting artistic partnership, a marvelous example of human and professional devotion to a captivating esthetic project that prevailed over the commercial success of the individual movies. This Golden Lion is the well-deserved recognition of an extraordinary career which has admirably parsed popular success with artistic ambition, without ever bowing to facile compromises.”

Julie Andrews has been a beloved and much-honored star of stage, screen and television for more than half a century.  She was already a Broadway legend when she made her feature film debut in 1964’s Mary Poppins.  Andrews’ iconic performance in the title role of the magical nanny brought her an Academy Award®, a Golden Globe and a BAFTA Award.  The following year, she earned a second Oscar® nomination and won another Golden Globe Award for her unforgettable portrayal of Maria Von Trapp in The Sound of Music.  She received her third Academy Award® nomination and won another Golden Globe Award for her “dual” role in Victor/Victoria.

Most recently she gave voice to the aquatic creature Kharaten in the recent blockbuster Aquaman, but is also well known voicing the character of Queen Lillian in Shrek 2, Shrek the Third and Shrek Goes Fourth as well as Gru’s mother in Despicable Me and Minions movies.

Ms Andrews was born and raised in England, where she first came to fame at the age of twelve as a young singer with a phenomenal voice performing on stage and on radio. She was still in her teens when she made her way across the Atlantic to Broadway, for her 1953 debut in the musical The Boy Friend.

In 1956 she created the role of Eliza Doolittle in Alan Jay Lerner and Frederick Loewe’s Broadway musical My Fair Lady, which became an instant classic. In 1961 Julie originated the role of Queen Guinevere in Lerner and Loewe’s musical Camelot.

In 1964 Ms. Andrews was called to Hollywood to play the title role of the magical nanny in Mary Poppins, which earned her an Academy Award.

In the same year, Andrews starred opposite James Garner in The Americanization of Emily (1964), for which she was nominated for the BAFTA Award for Best Actress in a Leading Role. A comedy-drama war film set in London during World War II, Andrews has described it as her favourite film, a sentiment shared by her co-star Garner.

The following year she portrayed Maria von Trapp in the iconic film The Sound of Music.

In 1966, Andrews starred in Hawaii, the second highest-grossing film of its year. Also in 1966, she starred opposite Paul Newman in Torn Curtain, which was directed by Alfred Hitchcock. The following year, she played the title character in Thoroughly Modern Millie (1967), for which she received a Golden Globe nomination. At the time, Thoroughly Modern Millie and Torn Curtain were the biggest and second biggest hits in Universal Pictures history, respectively.

Andrews next appeared in Star! (1968), a biopic of Gertrude Lawrence; and Darling Lili (1970), co-starring Rock Hudson and directed by Blake Edwards. Ms Andrews and Mr Edwards were married soon after and for the next 25 years, they made a string of movies that include The Tamarind Seed, 10, S.O.B., That's Life, and Victor/Victoria.

Ms. Andrews has been honoured for her work in television, beginning with her 1957 performance in the title role of Rodgers and Hammerstein’s musical Cinderella, and many years later starring in her own musical variety series, The Julie Andrews Hour. In addition, there were numerous television specials including three with her ‘chum’ Carol Burnett and another with John Denver and Placido Domingo entitled The Sounds of Christmas. Movies made for television include One Special Night with James Garner, Eloise At The Plaza, and Eloise at Christmastime.

An accomplished best-selling author (Mandy, The Last Of The Really Great Whangdoodles) Ms. Andrews joined talents with her daughter, Emma Walton Hamilton, in 2003 to create The Julie Andrews Collection. To date they have released over thirty books.

Their current franchise of books entitled, The Very Fairy Princess launched as No.1 on the New York Times Children’s Best Seller list and several of their subsequent releases within the franchise earned best seller list status as well.

Ms. Andrews’ biography, Home – A Memoir of My Early Years, was released in April 2008 and immediately climbed to No.1 on the New York Times Best Seller list. The second installment of her memoir, Home Work, is scheduled to be released this October and covers Julie’s life from 1963 through the late 1980s.

Several other projects created and/or authored by Ms Andrews and her daughter have been or are currently being developed for TV, film and stage. This includes a new television series recently launched worldwide on Netflix entitled Julie’s Greenroom, which the mother/daughter team co-created, wrote and produced with the Jim Henson Company.

Concurrently, Ms Andrews has come full circle and is delighting in her work as a director of musicals. Recently she helmed an extraordinary revival of “My Fair Lady” (the very musical in which Julie starred in the original 1956 Broadway production creating the Eliza Doolittle character) which opened at the Sydney Opera House to rave reviews and breaking all box office records and subsequently toured through Australia to the delight of multi-generational audiences.

Earlier in the decade Julie directed a musical adaptation of one of her children’s books (co-authored with Emma) entitled “The Great American Musical” in addition to two separate stage productions of The Boy Friend (in which Julie starred in the 1953 Broadway production).

Julie is dedicated to several charitable causes including Operation USA, which she and her late husband of 41 years (famed writer/director Blake Edwards), helped to found.  She is on the board of the Foundation for Hereditary Disease, supports Americans for the Arts and is an enthusiastic board member of the Los Angeles Philharmonic.

From 1992 to 2006, Ms Andrews served as Goodwill Ambassador for the United Nations Development Fund for Women (UNIFEM).

In the year 2000 Her Majesty Queen Elizabeth II bestowed upon her the title Dame Commander of the British Empire. Aside from an Oscar, Ms Andrews has received several Emmys, Golden Globes, a BAFTA and Grammy award, among others. In 2001 she was made a Kennedy Center Honoree and in 2011 was celebrated with the SAG Lifetime Achievement Award.