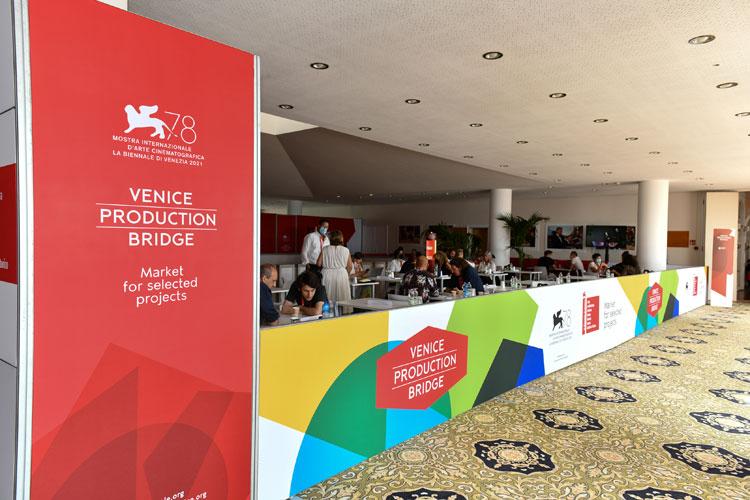 Figures of the 6th edition of the Venice Production Bridge

The initiative was held from 2-7 September 2021 in the context of the 78th Venice Film Festival.

Figures of the
Venice Production Bridge

The 6th Venice Production Bridge – the festival’s film market evolution into a specialized meeting point for completing projects – was held from 2 to 7 September, 2021 within the 78th Venice International Film Festival.

These are the figures of the 2021 VENICE PRODUCTION BRIDGE in comparison to 2020:

The 43 Fiction and Documentary and VR Immersive Story projects, plus 11 Biennale College VR and 3 Biennale College Cinema  projects were presented across 3 days (50 in-person and 7 online) and 949 one-to-one meetings have been organized  (614 in 2020).

The Venice Gap-Financing Market has been supported by the European Commission -Creative Europe and its MEDIA programme.

On the 5th and 6th of September, the 6 works-in-progress were presented in Sala Pasinetti (Palazzo del Cinema) and online on the VPB website, followed by a Q&A, while on the 7th of September one-to-one meetings are organized between the project teams and financiers.

The Awards of Final Cut in Venice 2021

16 Video-on-Demand platforms participated in the market, 10 in person and 6 online. 113 one-to-one meetings were organised with distributors (compared to just 47 in 2020).

Behind the scenes of the screen industry: for an innovative and resilient industry.

In association with the EU's Creative Europe MEDIA Programme, La Biennale di Venezia organized the 7th edition of the European Film Forum (6th September 2021) that gathered key industry leaders from all over the world.

Seizing the opportunity of celebrating the 78th Venice International Film Festival, the event was an opportunity to look into how the audiovisual industry has adapted to the new context and how it is reinventing itself, discussing the challenges and opportunities behind the recovery of the cinematographic industry from the crisis.
The event was opened by Roberto Cicutto, President of La Biennale di Venezia, followed by Giuseppe Abbamonte (European Commission, DG CNECT Director Media Policy) and Nicola Borrelli (Director-General, Cinema and Audiovisual, Ministry of Culture - MiC).
The event was moderated by Marjorie Paillon (producer, I Love Productions) and included the following speakers: Marysabelle Coté (ARTE), Stefano Massenzi (Lucky Red) and Jaume Ripoll (Filmin). The forum concluded with the closing remarks by Massimiliano Smeriglio (MEP & Rapporteur for Creative Europe 2021-2027).

PANELS AND EVENTS HELD WITHIN THE VPB VENUES

A total of 28 panels and events (27 in 2020), of which 19 international and 17 in streaming on the VPB Live Channel of the Venice Production Bridge.

This year 34 titles have been submitted to the Digital Video Library on the VPB Website through Festival Scope Pro. The titles come from the following sections of the 78th Venice International Film Festival:

From July 26 to September 8:
1482 Industry registered delegates had access to the restricted areas of the  website of which 627  have actively used the VGFM1to1, BARM1to1 and the Industry Guide.