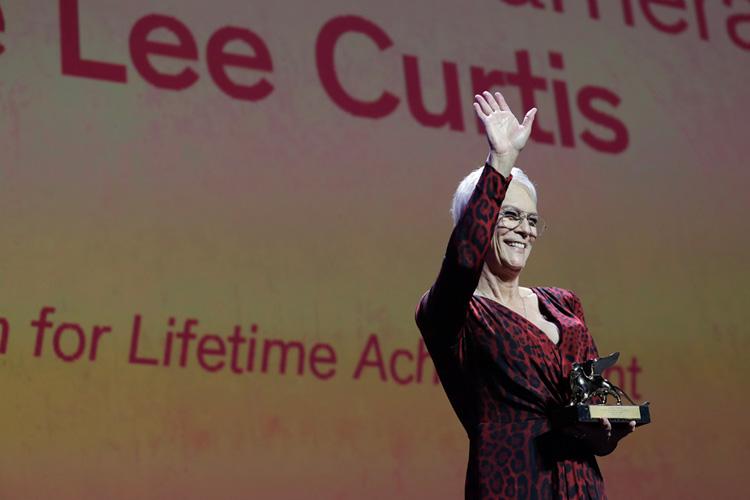 The honour to the iconic American actress is to be awarded on Wednesday September 8th at 10:00 pm in the Palazzo del Cinema.

The decision was made by the board of the Biennale di Venezia, which embraced the proposal of the Festival's Director, Alberto Barbera.

“I am incredibly humbled to be honored in this way by the Venice International Film Festival,” Jamie Lee Curtis said. “It seems impossible to me that I’ve been in this industry long enough to be receiving ‘Lifetime Achievement’ recognition, and to have it happen now, with Halloween Kills, is particularly meaningful to me. Halloween—and my partnership with Laurie Strode—launched and sustained my career, and to have these films evolve into a new franchise that is beloved by audiences around the world was, and remains, a gift. Italian Cinema has always honored and heralded the genre that gave me my career, so I couldn’t be more proud and happy to accept this award from the Venice International Film Festival on behalf of Laurie and all the courageous heroines of the world who stand tall in the face of seemingly insurmountable obstacles and refuse to yield.”

Regarding this award, Venice International Film Festival Director Alberto Barbera declared, “Jamie Lee Curtis belongs to that rarefied group of Hollywood actors who best reflect the qualities that are the very soul of the global film industry and its legacy. A direct descendant of America's film aristocracy – she is the daughter of two unforgettable stars, Tony Curtis and Janet Leigh – Jamie Lee Curtis is the natural embodiment of a star who knows how to play roles with versatility and amenability, all while infusing them with her peerless charisma and signature personality. All these qualities, combined with her work as an author of children's books and her commitment to her charitable work have cemented her status as an indelible and enduring global artist. To date, her extraordinary four-decade career, which began with her dazzling debut in John Carpenter’s 1978 horror classic, Halloween, encompasses more than forty feature films and reminds us that true talent, combined with intelligence, wit, endurance and sheer grit, are the hallmarks of this true and unforgettable star.

In addition to the legendary Halloween franchise, Curtis’ career spans almost every genre of film, including the memorable and beloved comedies Knives Out, A Fish Called Wanda, Trading Places and Freaky Friday, the intense action films True Lies and Blue Steel and the powerful and moving dramas The Tailor of Panama, My Girl and Forever Young. Her work reveals an artist who navigates tone and style with impeccable skill and definitive grace. We are thrilled to award Jamie Lee Curtis the 2021 Golden Lion for Lifetime Achievement.”

In 2018, David Gordon Green’s Halloween, starring icon Jamie Lee Curtis, killed at the box office, earning more than $250 million worldwide, becoming the highest-grossing chapter in the four-decade franchise and setting a new record for the biggest opening weekend in history for a horror film starring a woman.

And the Halloween night when Michael Myers returned isn’t over yet. Minutes after Laurie Strode (Curtis), her daughter Karen (Judy Greer) and granddaughter Allyson (Andi Matichak) left masked monster Michael Myers caged and burning in Laurie’s basement, Laurie is rushed to the hospital with life-threatening injuries, believing she finally killed her lifelong tormentor. But when Michael manages to free himself from Laurie’s trap, his ritual bloodbath resumes. As Laurie fights her pain and prepares to defend herself against him, she inspires all of Haddonfield to rise up against their unstoppable monster. The Strode women join a group of other survivors of Michael’s first rampage who decide to take matters into their own hands, forming a vigilante mob that sets out to hunt Michael down, once and for all. Evil dies tonight.

40 years later, in 2018, Curtis reprised that signature role in David Gordon Green’s record-breaking horror feature, Halloween, produced by horror guru Jason Blum. Halloween’s opening weekend was the biggest debut ever, for any movie in any genre, to feature a female lead character over 55 years of age. The second film in the trilogy, Halloween Kills, will be released in October of this year. Most recently, Curtis appeared alongside an incredible cast including Daniel Craig, Chris Evans and Ana De Armas in the smash hit Knives Out, a murder mystery with a modern take on the classic detective genre as written and directed by Rian Johnson. She has recently wrapped production alongside Cate Blanchett and Kevin Hart on the feature film Borderlands, which is based on the popular videogame of the same name.

In 2016, Curtis returned to her horror roots, starring in two seasons of the Ryan Murphy-created TV series Scream Queens, for which she received a Golden Globe nomination. She also co-starred opposite Richard Lewis in the acclaimed sitcom Anything But Love, which earned her both a Golden Globe and People’s Choice Award, as well as TNT’s adaptation of the Wendy Wasserstein play The Heidi Chronicles, which also earned her a Golden Globe nomination. In 1998, Curtis starred in the CBS television film Nicholas’ Gift for which she received an Emmy nomination. Other episodic work includes New Girl and NCIS.

Her other titles include, When I Was Little: A Four-Year Old’s Memoir of Her Youth, Tell Me Again About the Night I Was Born, Today I Feel Silly and Other Moods That Make My Day, I’m Gonna Like Me, Where Do Balloons Go?, It’s Hard To Be Five, Is There Really a Human Race, Big Words for Little People, My Mommy Hung the Moon and My Brave Year of Firsts.

Curtis is an AIDS activist and has a deep and active connection to many children’s charities. In 2020 she launched the website www.myhandinyours.com, which offers items of comfort where 100 percent of proceeds from sales benefits Children’s Hospital Los Angeles.

In addition, Jamie produced and appears in “Letters From Camp,” a podcast from Audible that debuted in September 2020 and returned for a second season this June. In July iHeart Radio will debut the Good Friend podcast, which Jamie hosts and delves into the many phases of friendship through unscripted conversations with new and old friends.