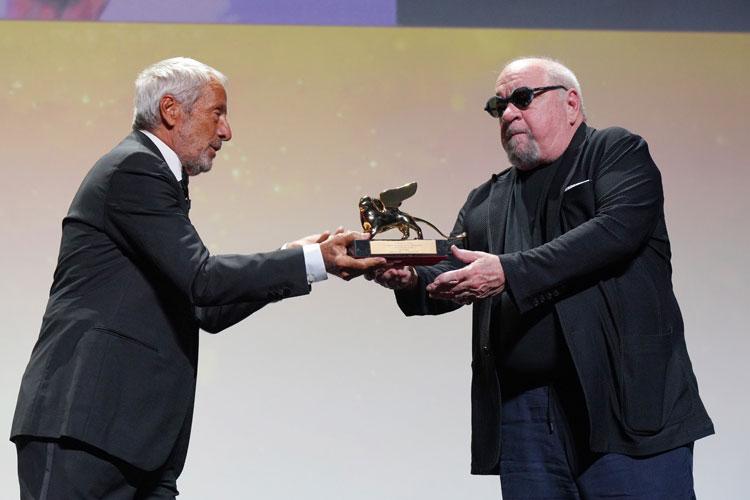 The honour to the American director and screenwriter will be awarded on Saturday 3 September; to be followed by the screening of Master Gardener (Out of Competition).

The decision was made by the board of the Biennale di Venezia, which embraced the proposal of the Festival's Director, Alberto Barbera.

Paul Schrader, in accepting, stated, “I am deeply honored. Venice is the Lion of my heart.”

Regarding this award, Director Alberto Barbera declared, “Paul Schrader is a key figure of New Hollywood who, from the late 1960s on, has revolutionized the imagination, aesthetics, and language of American film. It is not an exaggeration to affirm that he is one of the most important American filmmakers of his generation, a director who is deeply influenced by European film and culture, and a stubbornly independent screenwriter who nonetheless knows how to work on commission and confidently move within the Hollywood system. The daring visual stylization that informs all his movies puts him among the most up-to-date exponents of a type of cinema that is unreconciled and subtly investigates contemporaneity. Schrader measures himself against this contemporaneity not only with tireless intellectual and compassionate curiosity, but also with a surprising ability to navigate film's technological evolution, as well as its production and distribution systems. Thanks to this daredevilry (which not many filmmakers of his caliber are willing to attempt, in the mature phase of their careers), Schrader not only continues to work but in recent years he has also given us some of his most beautiful films.”

The President of the La Biennale di Venezia. Roberto Cicutto, added: “The 79th Venice International Film Festival of La Biennale di Venezia brings with it a very important anniversary. It was 1932 when the first edition of the oldest film festival in the world was held on the terrace of the Hotel Excelsior. So this year the Venice Film Festival celebrates its 90th anniversary. Events in history stole eleven of them if we count the number of editions that took place. But this anniversary is yet another gift that the Venice Film Festival offers to the Golden Lion Paul Schrader, the multifaceted film auteur. “

Good evening to you all.

Good evening Venice, the home of Cinema all over the world.  I am so honored to be here with you.

I have a lovely task before me tonight- to announce the Golden Lion to Paul Schrader for his lifetime of remarkable work.  Paul is much more than the list of films he has given us.  Richard Brody  from the New Yorker wrote that Paul is “One of the crucial creators of modern cinema”.

I can attest to that having just worked with the Maestro alongside Joel Edgerton and Quintessa Swindell on The Master Gardener. It was a Spartan shoot.  20 days.  No frills. No overtime. Minimal sets.  Minimal lighting. No net… and that’s Paul’s choice. Even the script is pared down to the essentials. But I mean, the Dude can write…

There’s an urgency to Paul’s filmmaking now, as if he is in a race against time to get these stories out, to get his voice heard.  I haven’t known Paul personally, but I have always been aware of his beacon. He has been a beacon for what is possible in American cinema for fifty years.

Coming to films late, Schrader fell in love with the cinema as a critic, specifically the European cinema of the Sixties. In 1972 he wrote a seminal book on spirituality and cinema, “Transcendental Style in Film,” and two years later began a career as a screenwriter, then as a director.

His films have been diverse: social realism, horror, satire, biography, literary adaptations- but always offbeat, original and intellectual. Over the years Paul has created a series of character studies called the “Lonely Man” or “Man in the Room” series about self-isolated men superficially defined by their profession: taxi-driver, gigolo, drug dealer, society walker, reverend, card player and, tonight, gardener. These men sit in their rooms, write their thoughts, go from place to place, waiting for a change to come.

If you think this sounds more like the career of a European director, you are right. For fifty years, Paul Schrader has written on spec, worked without subsidies and developed his own projects. He has worked within the system. When the system changed, he worked outside it, all the while becoming a beacon for young American filmmakers. It is possible to carve out a personal career in commercial cinema, possible to serve God and mammon, possible to work intellectually as well as emotionally, possible to get your vision made and seen.

Thank you Paul for being a beacon.

Director and screenwriter Paul Joseph Schrader was born in 1946, in Grand Rapids, Michigan to a strict Dutch Calvinist family. He has written or directed over thirty films. He earned his BA from Calvin College, then his M.A. from UCLA Film School. He subsequently attended the inaugural class at the American Film Institute.

After a debut as a film critic with a book that is still studied today (Transcendental Style in Film: Ozu, Bresson, Dreyer), he burst onto the film scene with his innovative scripts, leaving a lasting mark on movies by directors such as Sidney Pollack (The Yakuza, 1974) and Brian De Palma (Obsession, 1976), including four collaborations with Martin Scorsese: Taxi Driver – which won the Palme d’Or at the 1976 Cannes Film Festival and was nominated for the Oscar for Best Picture – Raging Bull (1980), The Last Temptation of Christ (1988) – which premiered at the 1988 Venice Film Festival – and Bringing Out the Dead (1999).

Without renouncing his activity as a screenwriter, his directorial debut with the drama Blue Collar (1978) – starring Richard Pryor, Harvey Keitel, based on a screenplay he cowrote with his brother Leonard, on car factory workers attempting to escape their socio-economic rut through theft and blackmail – inaugurated his career as a director in continuous tension between research and experimentation. Later the same 1978, Schrader wrote and directed the loosely autobiographical film Hardcore, starring George C. Scott, followed by the acclaimed crime drama American Gigolo (1980), starring Richard Gere, and the well received critically horror remake Cat People (1982), starring Nastassja Kinski and Malcolm McDowell.

The biographical drama Mishima. A Life in Four Chapters (1985), inspired by Japanese writer Yukio Mishima, interweaves episodes from Mishima's life with dramatizations of segments from his books. Mishima was nominated for the Palme d'Or at the Cannes Film Festival and Francis Ford Coppola and George Lucas served as executive producers. His 1990s work included the travelers-in-Venice tale The Comfort of Strangers (1990), adapted by Harold Pinter from the Ian McEwan novel, and Light Sleeper (1992), a sympathetic study of a drug dealer vying for a normal life. In 2005 Schrader described Light Sleeper as his "most personal" film. In 1998, Schrader won critical acclaim for the drama Affliction. The film tells the story of a troubled small town policeman (Nick Nolte), who becomes obsessed with solving the mystery behind a fatal hunting accident. Schrader's script was based on the novel by Russell Banks. The film was nominated for multiple awards including two Academy Awards for acting (for Nolte and James Coburn).

In 2019, Schrader was nominated for an Academy Award for Best Original Screenplay for the dramatic thriller First Reformed, starring Ethan Hawke and Amanda Seyfried, which Schrader also directed, premiered at the 2017 Venice Film Festival and which received critical acclaim. In 2021, Schrader directed the crime drama The Card Counter, starring Oscar Isaac and Tiffany Haddish, also premiered at the 2021 Venice Film Festival and widely lauded by critics.