Antonio Rezza and Flavia Mastrella have worked in theatre since 1987, the former as a performer-author and the latter as artist-author, jointly developing the concept and artistic project for their productions, which have reached a wide and above all diversified audience of fans.

Founded in 2000 by Simone Derai and Paola Dallan, the Anagoor company has worked in depth for its research into a new language, borrowing from images and symbols that lead back to our cultural memory. 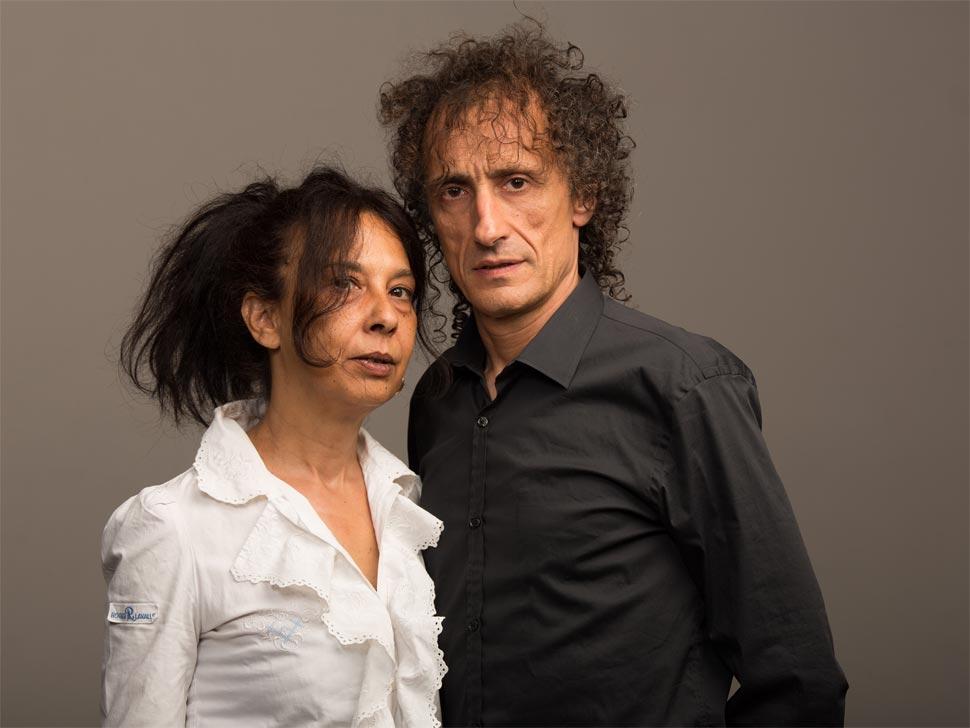 Flavia Mastrella (Anzio, 1960) and Antonio Rezza (Novara, 1965) work on involuntary communication. They have produced thirteen works for the theatre (including Pitecus, Io, Fotofinish, Bahamuth, 7-14-21-28, Doppia Identità, Fratto_X and Anelante), five feature-length films (including Escoriandoli presented in Venice in 1996, Delitto sul Po and Milano Via Padova) and an endless series of short and medium-length films. In 1991 they presented Barba e cravatta at the Festival of Avignon. Flavia Mastrella also works with sculpture, photography, video-sculpture (she has shown at GAM, Mambo and PAN); Antonio Rezza writes novels published by Bompiani (Feronia Prize 2008 for Credo in un solo oblio). Between 1996 and 1998 they collaborated with Tele+ as the creators of the television show Critico e Critici. For RAI 3, in 2000 they created the programme Troppolitani. In 2008 they won the Alinovi Prize for interdisciplinary art and published the first video collection of their black and white cinema, Ottimismo democratico, with Kiwido. In 2010, they presented Pitecus in Spanish in Madrid and Palencia, and staged several performance actions together with Afterhours. In 2011 they performed 7-14-21-28 at the Théâtre de la Ville in Paris and in 2013 at the Theatre Center Na Strastnom in Moscow. In 2012, Barbès published their book La noia incarnita, il teatro involontario di Flavia Mastrella e Antonio Rezza. In 2013 they were awarded the Premio Hystrio and the Premio Ubu. In 2014, they published Clamori al vento with Il Saggiatore. In 2016, they were awarded the Premio Napoli; that same year they presented Pitecus at La Mama Theatre in New York. In 2017, they were awarded the certificate of Uniqueness in Culture and the Ermete Novelli Prize at Montecitorio, the Italian Parliament. They have worked for many years with TSI La Fabbrica dell'Attore Teatro Vascello and with the Fondazione Teatro Piemonte Europa.

The Anagoor company was founded by Simone Derai and Paola Dallan in Castelfranco Veneto in 2000, established from the very beginning as an experiment in collective work. Today, directors Simone Derai and Marco Menegoni work regularly with Patrizia Vercesi, Mauro Martinuz and Giulio Favotto, while other artists and professionals join them continually, enriching their growth and underscoring their nature as a collective. An ongoing workshop, open to professionals and amateurs, Anagoor is the hub of a creative process open to the city and its diverse generations where, in a strenuous attempt to generate a theatrical art of the polis, there is an ideal continuity between educational activities in schools, work within the territory, the call for community involvement, the company's productions. Anagoor's theatre responds to an iconic aesthetic that precipitates into various final formats in which the performing arts, philosophy, literature and hyper-media theatre engage in a dialogue, demanding however, strongly and by virtue of the nature of this art, to remain theatre.
Their productions include: *jeug- (2008); Tempesta (2009), winner of a special mention at the Premio Scenario; Fortuny (2011); L.I. Lingua Imperii (2012), one of the winning productions at Music Theatre NOW 2015; Virgilio Brucia (2014); Socrate il sopravvissuto / come le foglie (2016) nominated for the Premio Ubu as Production of the year. In 2012 the company approached musical theatre in the film-concert Et manchi pietà, followed by the direction of two operas: in 2013 Il Palazzo di Atlante by Luigi Rossi (1642), presented at the Sagra Musicale Malatestiana in Rimini, and in 2017 Faust by Charles Gounod, a production of the Teatro Comunale di Modena, Teatro Valli di Reggio Emilia and Teatro Municipale di Piacenza.
Anagoor has won many awards, including the "Jurislav Korenić “ prize to Simone Derai as Best young director at the 53rd Festival MESS (2012), the Premio Hystrio – Castel dei Mondi (2013), the Premio ANCT for innovative experimentation in theatre, the HYSTRIO prize for direction (2016) and the Premio ReteCritica.
Since 2008 Anagoor has based its headquarters in the countryside around Treviso, at La Conigliera, a rabbit farm converted into an atelier and since 2010 it is part of the Fies Factory project at Centrale Fies – art work space.