George Benjamin is set to receive the Golden Lion for Lifetime Achievement on the evening of 27th September. The British composer “is universally acknowledged as one of the most important composers of our time – states the motivation. His prodigious talent, which exploded at a very early age with his composition At First Light, brought him instant international notoriety at the age of twenty, drawing the acclaim of audiences and critics alike who greeted him as predestined. His deep yet refined compositions reveal a precious and incisive style that shapes the material of sound with the visionary imagination of a sculptor who feels and sees form even before it is materialized in the score. A great educator, George Benjamin is a unique model for the new generations of composers for his creative imagination, intelligence in composing and understanding of form”.

The award ceremony is preceded by this encounter with the public at the Biennale headquarters of Ca’ Giustinian. 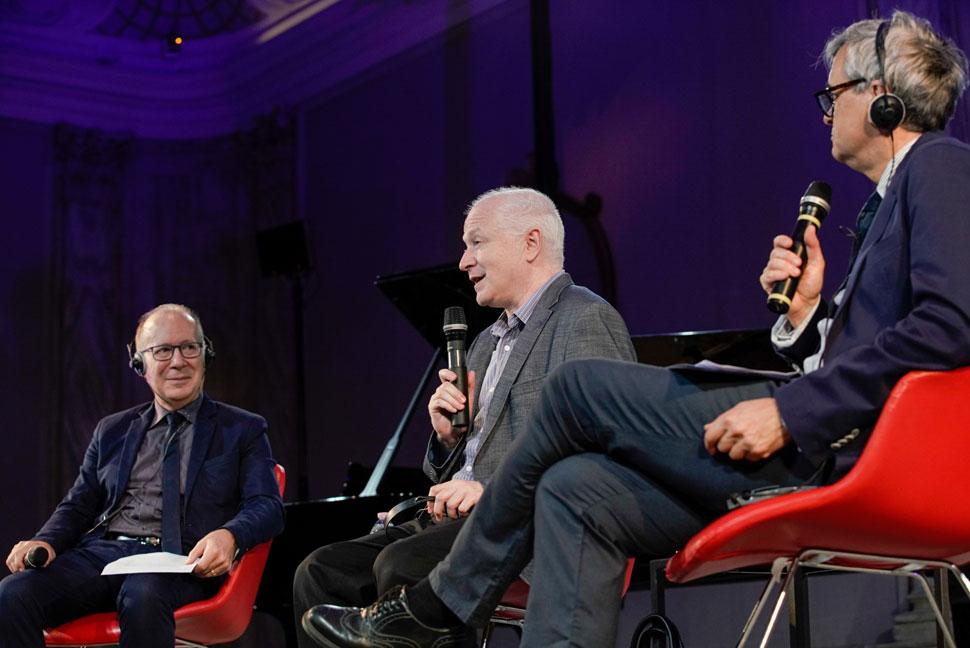 George Benjamin (London, 1960) began composing at the age of seven. He studied at the Paris Conservatoire with Messiaen and at King’s College of Cambridge with Alexander Goehr.

Benjamin was only 20 years old when Ringed by the Flat Horizon was played at the BBC Proms by the BBC Symphony Orchestra; two years later, the London Sinfonietta directed by Sir Simon Rattle played the world premiere of At First Light. Antara was commissioned for the 10th anniversary of the Pompidou Centre in 1987 and Three Inventions for chamber orchestra was written for the 75th Salzburg Festival in 1995. The London Symphony Orchestra under Pierre Boulez premiered Palimpsests in 2002 to mark the opening of ‘By George’, a season-long portrait which included the first performance of Shadowlines by Pierre-Laurent Aimard. More recent celebrations of Benjamin’s work have taken place at the Southbank Centre in 2012 (as part of the UK’s Cultural Olympiad) and at the Barbican in 2016, and the last decade has seen multi-concert retrospectives in Paris, Lucerne, San Francisco, Frankfurt, Turin, Milan, Toronto and New York.

He collaborated with playwright Martin Crimp for his operatic works: Into the Little Hill (2006), Written on Skin (2012), which won many international awards, Lessons in Love and Violence (2018), which premiered last May at the Covent Garden – Royal Opera House.

As a conductor Benjamin has a broad repertoire  - ranging from Mozart and Schumann to Knussen, Murail and Abrahamsen -  and has conducted numerous world premieres, including important works by Rihm, Chin, Grisey and Ligeti.

He is honorary fellow of King’s College Cambridge, the Guildhall, the Royal College and the Royal Academy of Music and the Royal Philarmonic Society.

His works are published by Faber Music and are recorded on Nimbus Records.