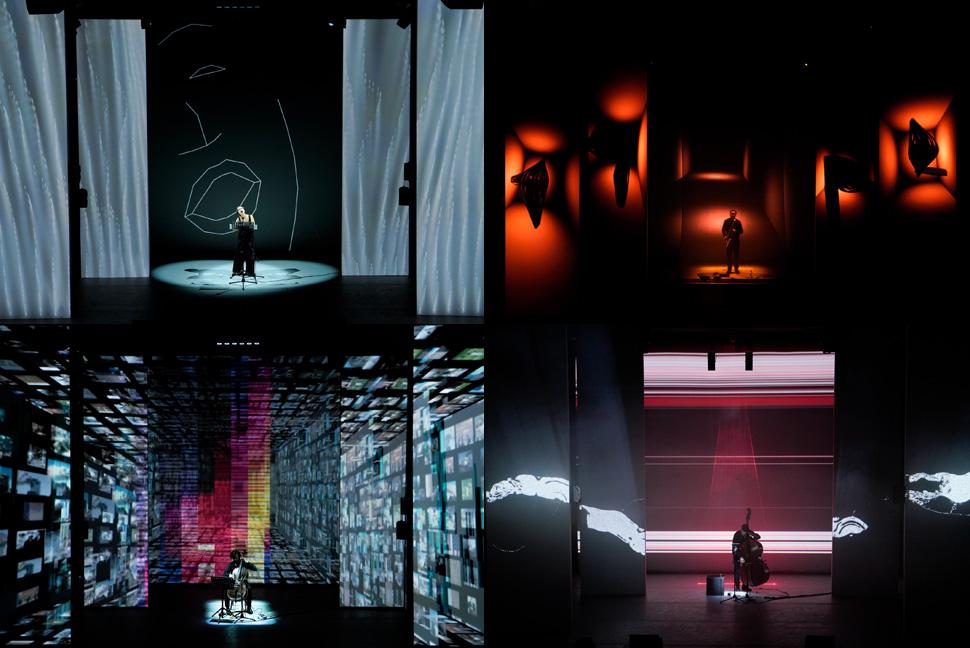 Morphology of a Digital Mouth

“Morphology of a Digital Mouth stages an imaginary oneiric treatise on vocal technique, which explores the relationship that is forged between the performer and her digitisation in media, in a formal and conceptual process of a growing consciousness of the vocal instrument and its digital extension. The centre of visual and musical interest therefore lies in the phonatory apparatus and facial gestures that allow human sound to be emitted and filtered naturally. The formal process begins with the breath, control of which is a fundamental factor in vocal technique, includes the analysis and manipulation of frequency and timbre in the emission of the voice and the consequent facial gesture, leading to the emancipation of the gesture itself from its human sound component. The act of singing, condensed in the dimension of gesture, is thus deprived of human sound, becoming an instrument to control its digital, acoustic and visual extension. The feedback system on metal plates plays an active role in the musical and visual formalization that, following the process of emancipating the facial gesture, ceases to be a resonant surface for vocal sound to become a source of complex and distorted sound, with a timbric component controlled by the de-humanized gesture”.
Luca Guidarini

“The intent of Habitat is to represent the creation and development of a space, understood as the field of interaction between “sonic-visual creatures”. The idea of a “sonic creature”, as opposed to that of a “sonic object”, underscores the intrinsic possibility of a sound event to develop its own forms of evolution over time and the fact that these forms exist only as a process of interaction with other creatures, thereby creating a habitat. The video extends the existence of these “sonic creatures” on a visual level, representing them in abstract structures that can interact among themselves to generate “sonic-visual creatures” in a profoundly immersive audio-visual space. The saxophone and the live electronics interact in various expressive modes and in turn generate soundscapes, a habitat, triggering the retroaction between individual and space. The latter at this point are represented on the visual level, thanks to the real-time work of the video-artist, by two typologies of fundamental actors, whose interaction reflects that between the player of the instrument and the soundscape: video objects with a strong and recognizable identity, that behave in a strictly sound- reactive mode with respect to the gesture of the sax, and more ample and complex structures, the evolution of which is subterraneously linked to the same principles that determine the behaviour of the live electronics”.
Francesco Pellegrino

“[nameless_remote_memory] intends to explore the impossibility of recovering a past event, the authentic meaning of which has irremediably disappeared into a dimension of absolute absence beyond the horizon of time, and the auroral nature of which is impossible to bring forth because it has been altered by the language, forma mentis and methods of representation of our time. In an artistic gesture of instant accelerationism, the work represents the persistent and indefinite retrospection of a computer to a state of pre-birth, simulating the effort of a machine that tries to remember the impenetrable phase that preceded its creation, that hazy and unidentifiable dimension that the literature of post-modern thinking often refers to as a “trace”. The search for a vision that predates artificial memory is described as a gradual immersion into a fog of data, fragmented information and ephemeral frequencies, a descent into a liminal space that aims to reach beyond a time of digital volatility, of subtle sounds and compressed images devoid of meaning to reveal a distant, original and ritualistic world that, because it can no longer be found, survives surreptitiously like a ghost, in a changing and unrecognizable apparition dissolving in the interferences”.
Matteo Gualandi

“Perpetuo explores the concepts of infinity and life cycle. Two opposing sonic bodies attract and repel one another, creating a continuum of audio-visual counterpoints. The two protagonists of the performance ideally represent the founding principles of the universe, father and mother of every change and transformation, the root and origin of birth and death. Their opposition expresses a dynamic of perpetual flux. A third element, light, makes their confluence real and alive: it represents the intersection between the two bodies. The video reveals the energy released by the two sonic bodies, which trigger mechanisms inspired by perpetual motion machines, where forces of gravity, mass and friction are the characteristics to highlight. The composition exploits and explores the ample technical and expressive range of the double bass, while the electronic part is articulated on three levels: the first manipulates the spectromorphology of the sounds produced by the performer; the second involves the spatialization of the sound in a three-dimensional environment made possible by a system of immersive listening (Ambisonics); the third involves the use of motion and acceleration sensors positioned on the arm of the performer, to modulate various parameters of synthesis built specifically for the performance”.
Matteo Tomasetti