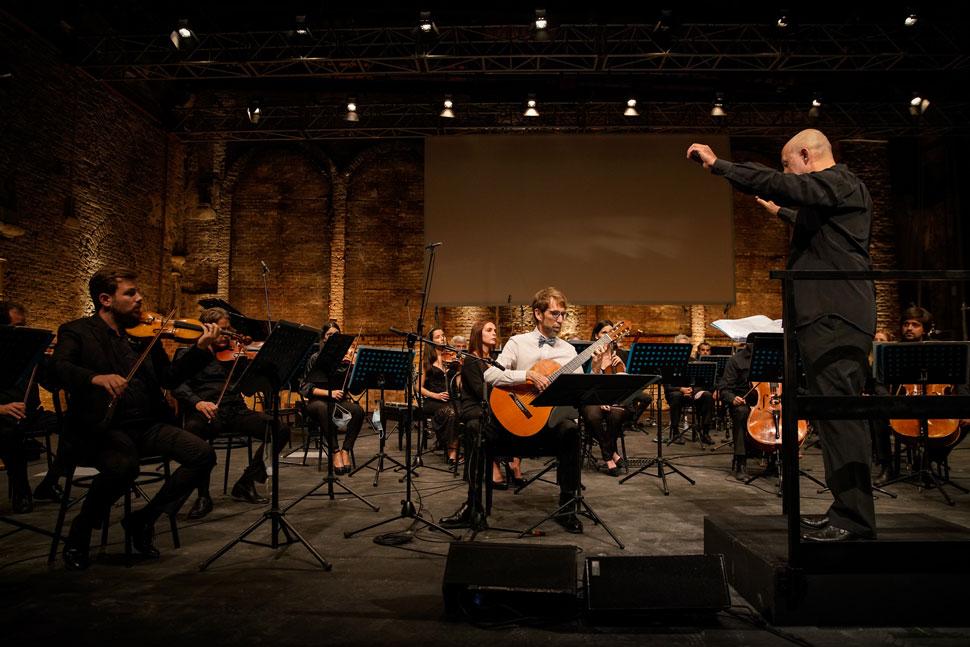 Still the leader of the contemporary Spanish school, Luis de Pablo, the author of an immense catalogue of over 200 works which includes the soundtracks to the films of Carlos Saura, has reserved for La Biennale and its inauguration on September 25th at the Teatro alle Tese, the world premiere of the Concierto para viola y orquesta and the Italian premiere of Fantasías for guitar and orchestra. The soloists are violist Garth Knox, formerly a member of Boulez’s Intercontemporain and later the Arditti String Quartet, and guitarist Thierry Mercier. The Orchestra di Padova e del Veneto will be conducted by Marco Angius, one of the most acclaimed performers of contemporary music.

Luis de Pablo presents his Concierto para viola y orquesta in these words: “In 1991 at the encounters in Royaumont, I experienced the joy of listening to the Quartetto Arditti with the remarkable violinist Garth Knox, who was playing with that formation at the time. In listening to him I promised myself that sooner or later, I would write something for him. I have had the good fortune and the honour to do so now, thanks to the Festival of La Biennale di Venezia”. The concerto is divided into three movements: Rapsodia, Susurro and Melodìas secretas. The viola is treated with great lyricism, a flexible and almost dream-like pace that at times becomes dazzling; the orchestra develops a multiform relationship with the soloist in the form of dialogue or interwoven counterpoint, also interacting as punctuation, amplification and commentary.

Luis de Pablo comments on the Fantasías para guitarra y orquesta: “A piece composed in 2001 for a commission by Radio France, it is dedicated to the person who commissioned it to me, the great guitarist and friend Thierry Mercier. The work is divided into four movements and the fourth is in turn subdivided into four more: Rapsodia, Murmullo, Relato, Solo I – Antaño – Solo II – Hogaño (Antaño means ‘past’ and Hogaño ‘present’ in ancient Castilian). Antaño is based on the Fantasía IX by Alonso Mudarra (XVI century), which explains the title of the composition. I had no intention of creating a pastiche, but to continue in the direction of a ‘peaceful coexistence’ between styles – or better still: materials – that I initiated with the series of Éléphants ivres in 1972”.

The Golden Lion for Lifetime Achievement is a well-deserved acknowledgment to the greatest living Spanish composer, a brilliant artist of boundless creativity. His rich and varied production has contributed decisively to drawing Spanish music out of its restricted nationalistic perspective to launch it into an international dimension open to the languages and trends of the avant-gardes. De Pablo has catalyzed the most significant experiences of contemporary languages into an extremely personal, profound and expressive idiom that turns to “mixed” genres as one of its preferred areas of inquiry. His fertile craftsmanship has often merged the experiences of western contemporary music with the concerns of extra-European music for which the master has always had a particular predilection. A great teacher and popularizer, Luis de Pablo must also be credited for having brought to Spain, in the difficult political era of the Francoist dictatorship, a powerful idea of freedom of expression not limited to the field of art alone.