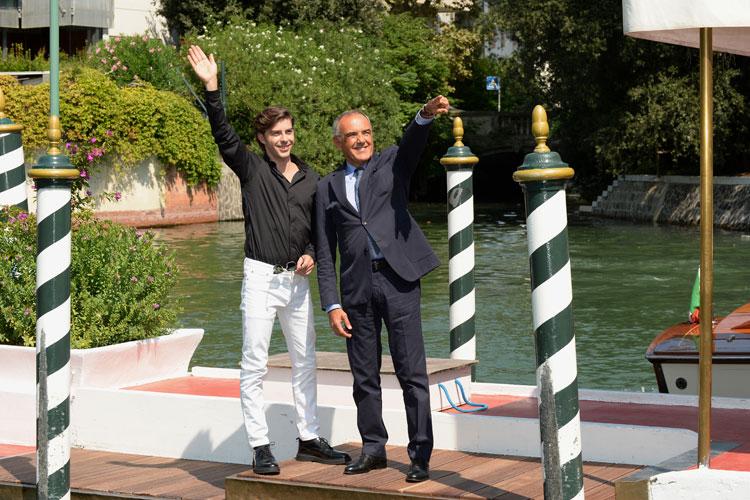 Michele Riondino to host the opening and closing nights

The 75th Venice Film Festival opens on 29 August and will come to an end on 8 September.

The opening and closing nights of Venezia 75

Actor Michele Riondino will host the opening and closing events of the 75th Venice International Film Festival 2018, directed by Alberto Barbera and organized by the Biennale di Venezia chaired by Paolo Baratta.

Michele Riondino (Taranto, 1979) studied acting at the Accademia Nazionale d'Arte Drammatica Silvio D'Amico, from which he graduated in 2000. He began his career in theatre while still studying, giving him the opportunity to work alongside important professionals such as Giuseppe Patroni Griffi, Marco Bellocchio, Emma Dante and Marco Baliani. Following his earliest roles in important Italian television series, and his work creating new productions for the theatre with the company he founded, "Circo Bordeaux", in 2007 he won the most important role in his career, playing the ambiguous Francesco in Il passato è una terra straniera by Daniele Vicari with Elio Germano. This role won him the Best Actor award in 2008 at the Rome Film Festival and a Special Mention at the Miami Film Festival. Since 2008 he has won fame and many acknowledgments, including the Golden Graal 2009 as a Rising Star and a nomination in the short list for the Nastro d'Argento 2009 awards for his important roles in films such as Marco Risi's Fortapàsc, Alessandro di Robilant's Marpiccolo, presented at the Alice nella città sidebar of the Rome Film Festival in 2009. That same year he starred in Dieci inverni, the hit debut film by Valerio Mieli, presented at the Venice Film Festival and selected for the Tokyo Film Festival. The year 2010 was a year of confirmation: he was selected as one of the top ten talents in Europe and won the Shooting Star award at the Berlin Film Festival; he starred in the films Henry by Alessandro Piva and the award-winning Noi credevamo by Mario Martone, also in competition at the Venice Film Festival, in an edition in which the latter also won the "Biraghi" award from the SNGCI and the collective Nastro d'Argento. The following year he returned to the Venice Film Festival in the cast of Saverio di Biagio's debut film Qualche nuvola. In the course of that year, Michele split his time between television and film, accepting the courageous challenge of playing Salvo Montalbano. The main character in 6 films for television, Il giovane Montalbano was the prequel to the successful role played by Luca Zingaretti in the 2012 hit on RAI television. For the big screen, he starred in Acciaio adapted from the eponymous literary best-seller by Silvia Avallone, and directed by Stefano Mordini, and in Bella addormentata, directed by Marco Bellocchio, both presented at Venezia 69. In 2012 Michele Riondino directed the plays La vertigine del drago (presented at the Festival of Two Worlds in Spoleto in 2012) and Siamo solo noi, in which he also acted. In 2014 he was the co-star of Il giovane favoloso (directed by Mario Martone, in the official Competition Venezia 71), one of the stars in Maraviglioso Boccaccio (directed by the Taviani brothers), and the star of Senza lasciare traccia (directed by G. Cappai). Following the incredible success of his television role in Giovane Montalbano (which reached almost 8 million viewers for an audience share of 30%), RAI television cast Michele in the starring role of two important and highly anticipated projects for the 2015 television season: Giovani Montalbano 2 and Pietro Mennea: la freccia del sud, a two-part biopic which was one of the hits of the RAI 1 television season, reaching 7 million viewers for an audience share of 25%, about the life of the famous Olympic athlete. In the 2015-2016 theatre season, Michele starred in the plays Orfeo e Euridice (directed by Davide Iodice), Giulio Cesare (directed by Alex Rigola) and Angelicamente anarchici _ Fabrizio De Andrè e Don Andrea Gallo (directed by Michele Riondino). In film, in 2016, Michele starred in La ragazza del mondo (presented at Venezia 73, where Michele was awarded the Premio Pasinetti as Best Actor and the Ciak d'oro). In early 2017, he starred in the film Falchi by Tony D'Angelo. Last year he returned to the Venice Film Festival with Diva!, which was very well received in its premiere screening at the Sala Grande. Riondino is the only male star in this feature-length film inspired by the life of the great diva Valentina Cortese. Diva! will be released in Italian theaters tomorrow, June 7. Michele also starred in the television film La mossa del cavallo adapted from the novel by Camilleri, which confirmed Michele's leadership in the Auditel television ratings (with a share of over 32.3%). We will soon be seeing Michele Riondino in theatres in Antonello Grimaldi's film Restiamo amici. For 5 years, he has been the artistic director of the May 1st concert in Taranto.

The call is reserved for Italian teams composed of a director and a producer.

The deadline for submitting projects has been postponed to May 22, 2021.