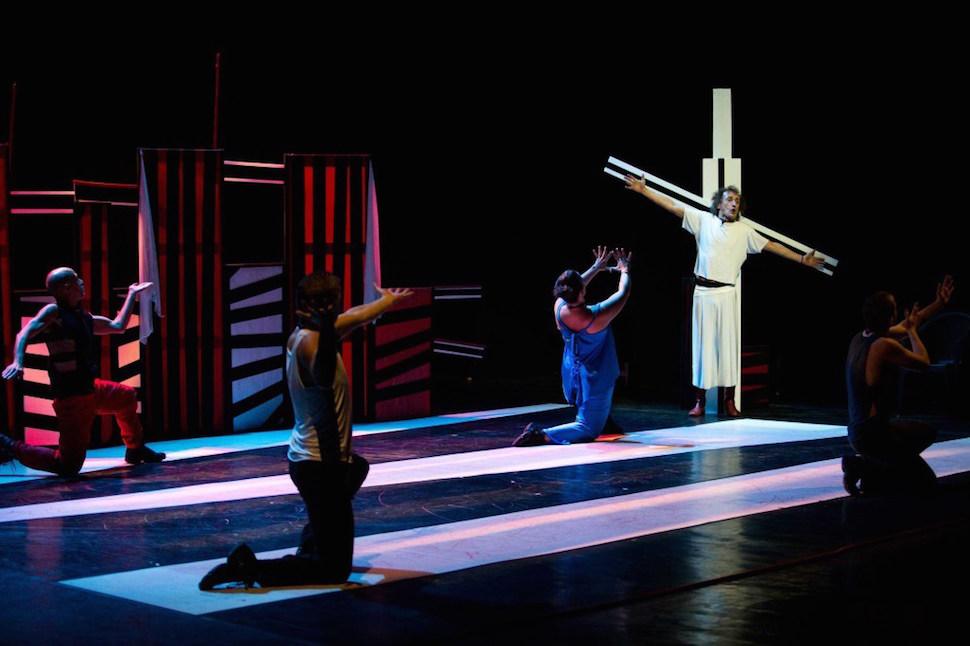 On the stage a ritual, rhythm in the movements and the voices. There are several performers on the stage, we thus arrive in uncontaminated territory. Too often we give in when the absurd is behind us, and come to terms with past traumas. Thus the inferior being seeks comfort in civil commitment. And with the death of others self-esteem returns. Between dances, Oriental feasts and premeditated grief one breaks free of solidarity, a business practices that generate profits. Culture with eyeglasses also bends over. Anyone who reads a book is forced into silence by the writer, anyone who reads buys his silence, anyone who buys a book foments and overturns the conspiracy of silence. But with the biological mother the game is over: skin from her skin but the end of yours. The powerful man builds his space by himself and the others stand by and watch... until they can no longer move. The vocal experimentation is guided towards an apparent monotone, the digging is internal, the carotid breathes so that it can be liberated from the falsetto that corrodes it. But lurking is the verbosity that elongates the vowel and pulls the cord even before it breaks: an unmistakable carelessness that conceals the interior word, the one that brutalizes the gut. Until it takes the voice under water, a political design where even God has failed, because only the word of God softens under water, becomes mush, is downgraded to waste paper. Goodbye third dimension, the balance is precarious, the stereotype explodes, a wall, a monitor in which to emerge, to be reinvented. The Anelante hidden among the walls is ready to sustain the everlasting hierarchy with the virtual systems he has taken command of; without exposing himself, he claims to know the world. Antonio Rezza was accompanied by Ivan Bellavista, Manolo Muoio, Chiara Perrini, Enzo di Norscia. The assistant for creation is Massimo Camilli, the lighting design is by Mattia Vigo re-elaborated by Daria Grispino.