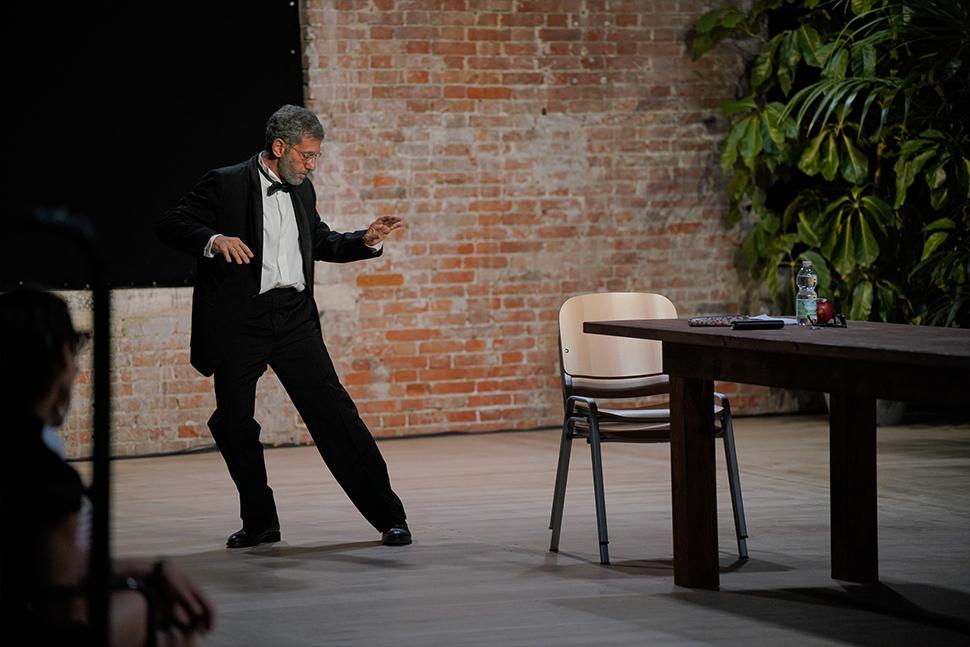 Sovrimpressioni is a performance piece for a small audience, inspired by Federico Fellini’s 1986 film Ginger and Fred.
As we have been doing for some time now, we have made more than one piece based on the same source. In this case we made three:
Sovrimpressioni, our production Avremo ancora l'occasione di ballare insieme, and the documentary on our work Siamo qui per provare, created with Jacopo Quadri (and Greta De Lazzaris as DoP).
What is Sovrimpressioni? We stole the title from Andrea Zanzotto’s superb collection of poems, and his need to superimpose nature and artifice, mother tongues and neologisms, the way we relate to things and the thoughts flashing into our heads. We have been interested in all of these for some time, in terms of the relationship we have established between biography and fiction; between the figures we chase after in order to get to know ourselves better and the present; and the historical background that weighs on our choices, confuses them, contradicts them, confirms them.
In Fellini’s film, Pippo and Amelia – two artists known for their impersonations of Ginger Rogers and Fred Astaire, who have never come close to success – return to the public eye after years away to appear in a trashy, vulgar television show.
Daria Deflorian and Antonio Tagliarini, after years of working with other artists, return to the stage as the duo that made them famous. They have been successful in their own way, though their prolonged closeness has blurred some of the boundaries between them; their long cohabitation on stage has weakened their friendship, made them spikier in their need to stand out.