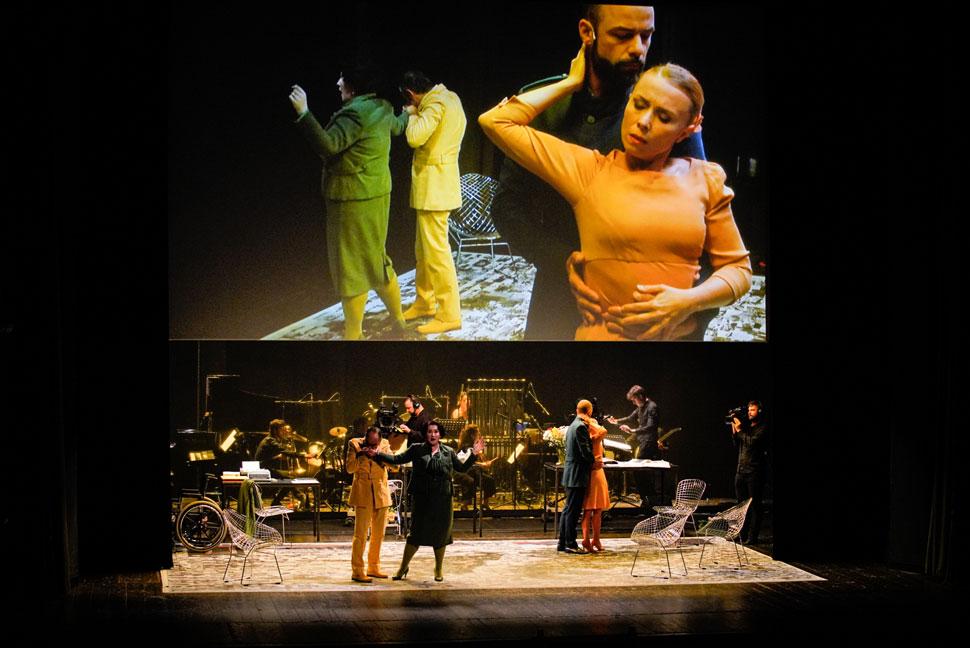 With a background in rock and jazz music, Sebastian Rivas – the Festival’s recipient of the Silver Lion award – ranges confidently in his experimentation between digital, acoustic and electronic music. Aliados is a multimedia opera, which manipulates sounds, images and voices in real time. It is also an opera of our times, which evokes the real-life encounter between Augusto Pinochet and Margaret Thatcher, the allies of the title, at the time of the conflict between Argentina and the United Kingdom over the Falkland Islands.

A statement from Ivan Fedele

Sebastian Rivas’s musical experience, which derives from jazz, rock and improvisation, is distinguished by its brilliant and self-confident originality, ranging across digital, acoustic and electronic experimentation. His production, rooted initially in experimental music and electronics, has gradually acquired an increasingly pronounced dramaturgical, spatial and theatrical dimension, as demonstrated by his many scores for the theatre and dance, as well as his sound installations and collaborations in the fields of architecture and the plastic arts. The political engagement that distinguishes the poetics and experimentation in Sebastian Rivas’ s compositions is reflected in the work for theatre he now brings to the Biennale: Aliados (2013), a multimedia opera with sounds, images and voices in real time, is an opera of our times, based on the meeting between Augusto Pinochet and Margaret Thatcher, allies at the time of the conflict between Argentina and the United Kingdom over the Falkland islands.

A statement from Antoine Gindt

Aliados is a political opera. Its subject matter is Margaret Thatcher’s visit to Augusto Pinochet in London, on March 26th 1999, an encounter that was designed as a proof of their “friendship”, to show the world the last remains of their beliefs in a final attempt to manipulate public opinion. Thanks to its media coverage at the time, we still have a trace of that teatime between the two old allies of the Falklands War, even though we have forgotten its main issues.
As an original work, Aliados is therefore a means to revive our memories by sticking to the essence of the story (the encounter between the two characters and the contents of their conversation), all the while creating a fictional frame within which the audience can be captured and can find the right perspective.
Sebastian Rivas and Esteban Buch have chosen a sophisticated and direct stratagem. Aliados respects the genre’s tradition with a typical vocal quartet, but adds a fifth character whose hoarse voice interferes with the purity of the classical opera singing. The abundance of musical quotes (from Leporello’s catalogue aria to London Calling by The Clash) creates an intricacy of references that arouse the ear and awaken our evasive memory.
The real-time transformation and spatialization of sound increases the suggestive power of the dialogue and uncovers the violence that hides behind polite, innocuous words.
The staging was conceived concurrently with the music and electronics; it can be interpreted on two different levels: the actual, objective situation and its subjective interpretation by the media. Live filming offers the audience close-ups, it enlarges details, it reverses perspective and hides the objective reality of the stage – the orchestra’s omnipresence, for instance, is concealed on screen. Documentary evidence is essential, as suggested by the libretto: we have tried to creatively integrate it within the opera, not only to illustrate a story but to give it temporality, density, self-sufficiency.
In a show where real-time is everywhere (music, image) the quality relies on the accuracy of the musical interpretation (by Léo Warynski) and on the singers’ performance. To avoid plain imitation, we have made our characters – real and invented – believable.
The result is an astounding work of musical theatre, thanks to the extraordinary performance of Nora Petročenko, Lionel Peintre, Mélanie Boisvert, Thill Mantero and Richard Dubelski. Dark and off the wall, Aliados is strikingly truthful.