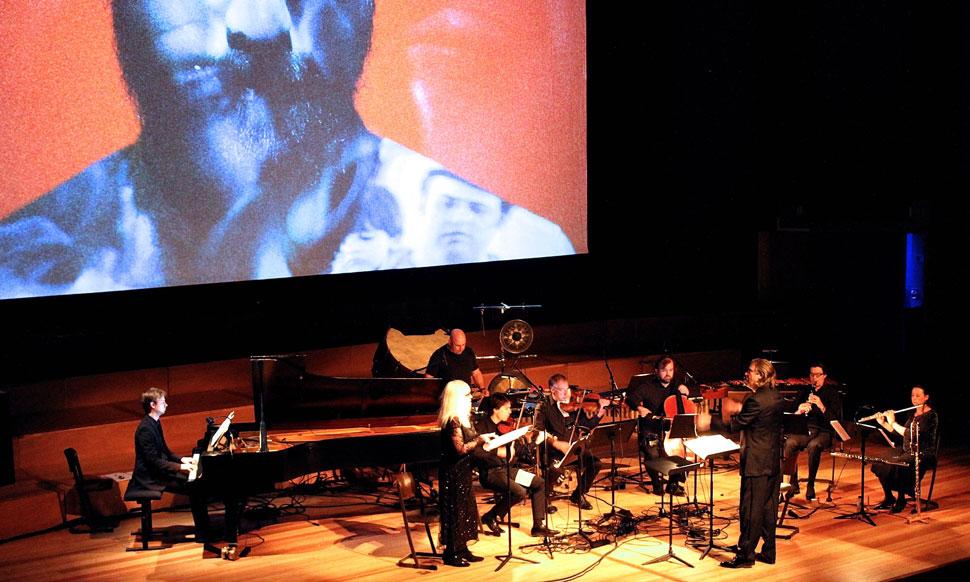 The concert by the Flemish group HERMESensemble, founded in 2000 by conductor Koen Kessels, is a journey to the boundaries between visual arts and contemporary music. The works in the programme by Wim Henderickx and Vykintas Baltakas are conceived with visual artist and musician from New York Kurt Ralkse. Similarly, the work that Annelies Van Parys presents at the Biennale is the result of a prophetic 1932 feature film by Belgian filmmaker Henri Storck.

The music by Annalies Van Parys is a commentary to the film Histoire du soldat inconnu (1932) by Henri Storck, a powerful protest against the obscenity and hypocrisy of militarism, based on the atmospheres inspired by the sequences and their sarcastic and aggressive editing, and sometimes relying on citations.
In Atlantic Wall Wim Henderickx outlines a multimedia journey through the deepest layers of the human mind. Drawing inspiration from Dino Buzzati’s Il deserto dei tartari (The Tartar Steppe, 1940), Henderickx has composed a sort of musical poem that borrows verses by Paul Verlaine and is integrated with the video by Kurt Ralske, inspired by images from the Nazi Atlantikwall, and with the electronics of Jorrit Tamminga.
Neon Sea by Vykintas Baltakas plays on the balance between animate and inanimate sound, in a zone where it is hard to distinguish between life and death. The buzzing of a neon light is the starting point for the piece in which the instruments unexpectedly take over and harmonize with the sound spectrum of the soloist, the flute.