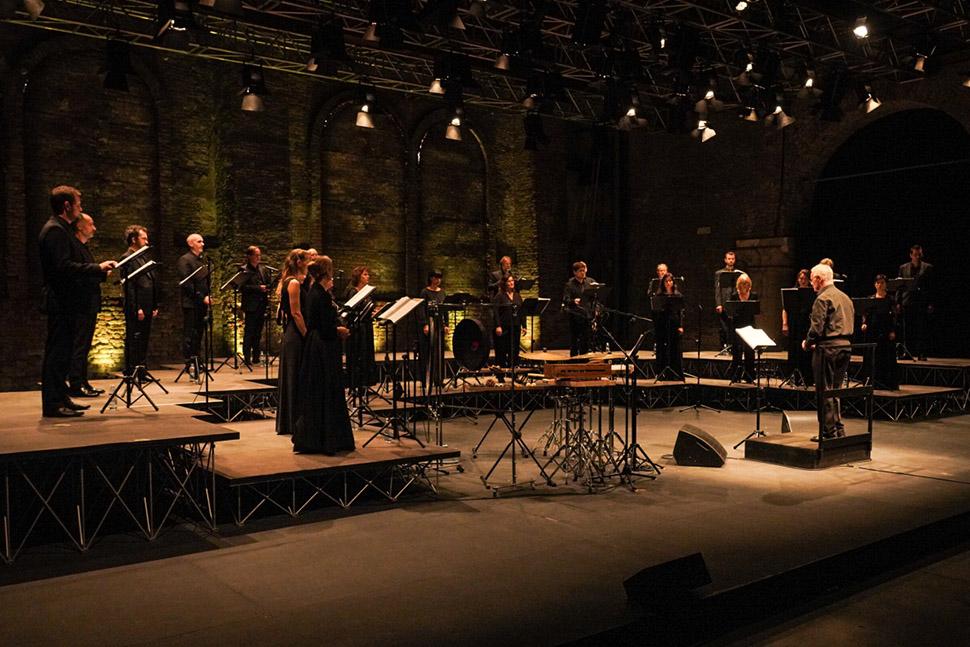 The vocal music of Kaija Saariaho, the Golden Lion for Lifetime Achievement of this Festival, is based on the texts of important authors from various eras who address universal themes such as the solitude of the journey, distance, and death. The texts are analysed by the composer as sound material and as instructions and suggestions for listening. The third concert dedicated to Saariaho features the world premiere of Reconnaissance, performed by the Accentus ensemble, who is also the protagonist of the Italian premiere of Tag des Jahrs.
Through creative solutions that question musically what a chorus can be, Kaija Saariaho’s score treats humankind itself as a character, expressing itself both in unison and in fragmented voices, in opposing groups and in isolated individuals.

Composer Sivan Eldar reinterprets the myth of Arethusa in After Arethusa, relying on the writing of Cordelia Lynn, the playwright and librettist with whom she has often worked (they will make a joint debut at the Opéra de Lille in the 2021-22 season).
“See our cells drip down and mingle, membranes break, and every hair / shivers in a black / of mud”: the voice of Arethusa celebrates the reunion of two beings through the sensuality of Lynn’s fluid, liquid lines. As in the Greek tragedy, Sivan Eldar imagines the chorus as witness to Arethusa’s transformation; the chorus comments on the action as if echoing Lynn’s lines, leaving the solo voice of Arethusa to narrate the more intimate moments of her story herself.

The painter, director, scenographer and artist Sylvano Bussotti is featured with Per ventiquattro voci adulte o bianche, a sort of vocal happening that was also performed in a version for the theatre by Living Theatre (in 1967 in Bordeaux). Fourth of the Cinque frammenti all’Italia, composed in 1967, the cycle consists of fragments of texts by Rainer Maria Rilke, Theodor Adorno, Aldo Braibanti, Michelangelo, Gabriele D’Annunzio, Charles Baudelaire, Jacopone da Todi and others that are reduced to miniscule encrypted signs entered by hand in the scores by the composer himself using a very peculiar graphic style. The complex musical map of Per ventiquattro voci adulte o bianche is accompanied by a very detailed series of instructions for performance, which may also take the form of a stage performance: the work leaves ample space for aleatory elements and indetermination.