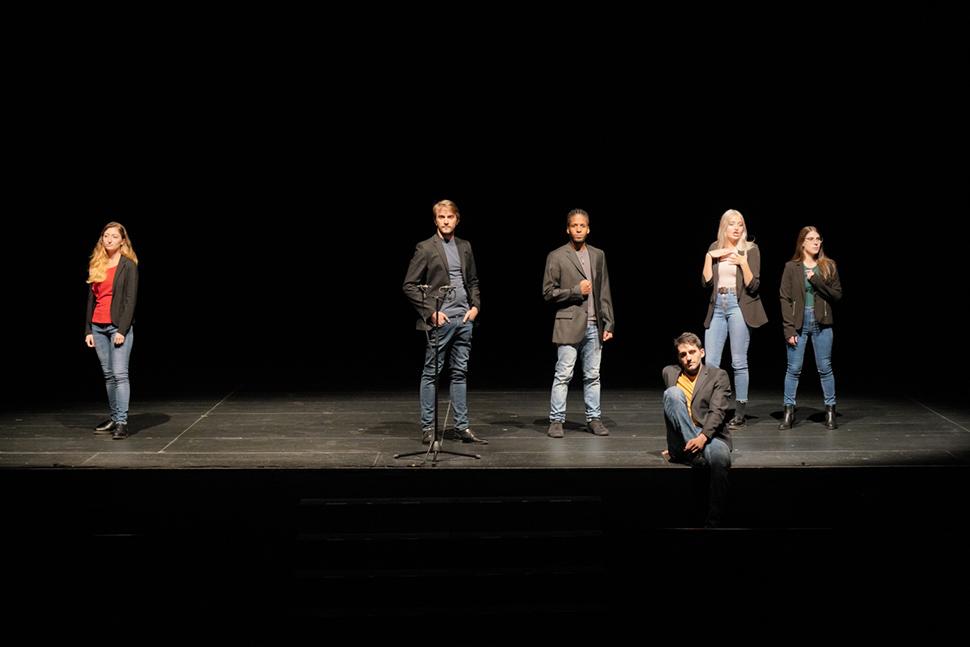 A Folk Song Collection by the Irish composer and performer Jennifer Walshe collects in two volumes her fifty-seven short song fragments composed for small vocal groups of one to three voices. “That’s why Danny and Serena will never be happy in love”, “I don’t ever google you. I don’t want to know what you are doing”, “I had to have Botox to stop me looking angry. Don’t you know that shit is expensive”, “She’s the kind of girl who never had a yeast infection”, “I wanna turn off my adrenalin” ... Short – sometimes extremely short – texts that have nothing folkloristic about them in a traditional sense; fragments of the conversations of ordinary people – ordinary “folk” – overheard in the street, in cafes, in supermarkets or on public transport. Using this material Walshe composes her various power ballads – “many camp, over-the-top 1970s/1980s stadium tunes” – with melodic lines and rhythmic patterns reduced to the bare bones. The singers are free to transpose the songs to suit their own voices, to “make the songs their own”, but the style must be “rock, very karaoke, very ‘Glee’”; above all the songs “should be sung in a very heartfelt, overenthusiastic way”. The challenge for the interpreter is to make these short settings of brief and often disorientating scraps of text their own and to turn them into pure interpretative gestures.

There are different ways to observe nature. The one chosen by Peter Ablinger is through music. His Studien nach der Natur (“Studies from Nature”), composed between 1995 and 2002, condenses into under ten minutes a mini-catalogue of the natural sounds and, more often, the noises that accompany our everyday lives. In line with his research into the nature of sound, in this brief work for vocal ensemble the Austrian composer adheres to the principle by which noise should be used for what it is, and not as a something for musical elaboration or for carrying the sense of something “other”. In short, we should seek to “listen”, not to “understand”. There is also a playful dimension to the work, which inevitably involves the listener, stimulated by the sounds, participating in a kind of game of “What sound is this?”. The vocal interpreters are not required to sing in a conventional sense (the pitch ranges of the sounds are in fact compressed), but their rhythmic timing must be very precise, with each voice given a different metronome mark.

A similar “sensory” approach is adopted by Claude Vivier in his 1977 piece Love Songs, a vocal work composed in the libertarian spirit of the 1970s with its anticonformity with respect to traditional forms and styles, as well as in the way it positions itself in an in-between position, a terrain vague somewhere between concerto and music theatre. Love, rather than being illustrated through a story, is evoked not only through the ghosts of two iconic couples, Romeo and Juliet and Tristan and Isolde, but also in the complex drama of words, body sounds (including tears and sighs), and gestures (both vocal and extra-vocal) to create a mosaic of varying intensity made up of different nuances, tones, rhythms, words, speeds of delivery, and movement. A similar variety is evident in the geometry of the vocal ensemble, which is in continual flux along a wide spectrum from brief solos and duets to passages for all seven voices of the ensemble. The musical writing itself, leaves ample room for the interpreters to make their own decisions about the performance, including the distribution of the various roles. “To be staged or not / To be felt not understood / Let tones from the others inspire your own. / let the music flow out of you as if you were a kid. / notation is only a reminder for certain states / never follow the signs but only their spirit. / in this score you do what is appropriate for you / to do and let the rest to the others. / Always be in love” (Claude Vivier, 1977).