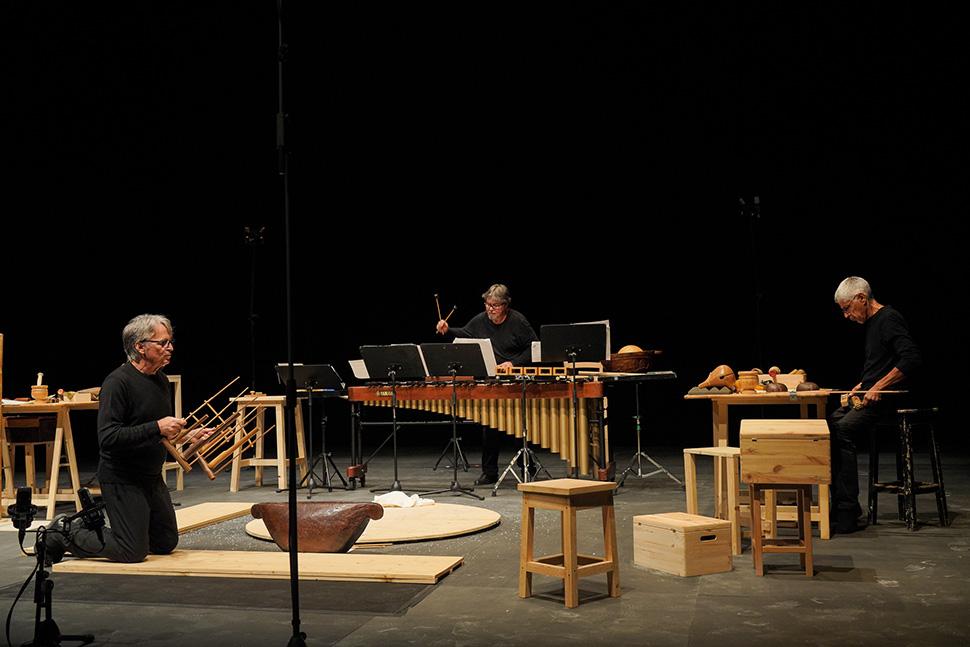 Orazi e Curiazi tells the story of one of the most ancient myths in the history of ancient Rome, the duel between the champions of two cities at war with each other, Rome and Albalonga. The Horatii represented one of the leading families of Rome which, shortly after its foundation, was still little more than a village, while the Curiatii were the champions of the local rival, Albalonga. The score develops the idea of a narration, with real and imaginary sounds combined in an indissoluble mix of theatre and music. Using both real and metaphysical sounds, their bodies and their voices, and the timbre and the rhythm of the percussion instruments, the two interpreters create a dramaturgy of the fantastic linked to a myth that was particularly dear to Battistelli, who was born close to the place where the archetypal combat is supposed to have taken place. At the world première of Orazi e Curiazi in Beijing in October 1996 the work was performed by Antonio Caggiano and Gianluca Ruggeri, two of the percussionists of Ars Ludi.

When Mauricio Kagel arrived in Europe at the end of the 1950s, central to his artistic production was the theme of identity – an issue already at the heart of the debate in the vibrant cultural life of the modernist circles of Buenos Aires – and, more specifically, the relationship between the compositional processes of the new music and tradition. The son of Russian Jews who had emigrated to Argentina in the 1920s, Kagel’s new experience of migration inevitably involved questioning his own relationship with European music, and, in particular, its established form of public fruition, the concert. The result of this was “instrumental theatre”, which in Kagel’s oeuvre finds one of its most important examples in Dressur, which was performed for the first time at the Rencontres européennes de musique contemporaine in Metz by the percussion trio Le Cercle.

In Dressur Kagel offers us a phenomenological, multi-layered experience of time that utilises different levels of artistic and musical language which intersect with each other in unexpected and ironic ways. Playing on the fact that all the instruments used in the piece are made of wood, Kagel manipulates not only the sound but also what might be termed the cultural environment of the concert space. The surreal element of the work is perhaps hidden in the reference to the circus, both in the title and in the citation of the Souvenir de Cirque Renz around which the absurd little drama involving the three percussionists is played out. In this contest between the three protagonists, each tries to dominate the others in a musical and theatrical game with neither winners nor losers, in a surreal cabaret that is apparently improvised but which is in fact meticulously prepared in every minimum detail in the score.