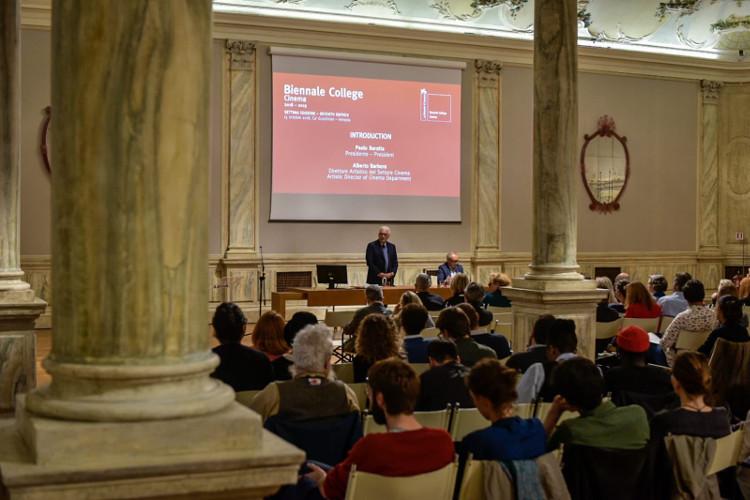 The projects for the final phase are The End of Love by Keren Ben Rafael, Lesson of Love by Chiara Campara, and This is not a Burial, it’s a Resurrection by Jeremiah Mosese.

The selected projects are from Israel, Italy and Lesotho. Through December 6th, 2018 they will participate in the first of two workshops in Venice.

The 3 projects of the
seventh edition

The selection has been made of the 3 projects that will move on to the production phase of the 7th edition (2018 - 2019) of the Biennale College – Cinema.

The 3 projects were chosen following the first workshop with the 12 projects selected from around the world (this year from Bolivia, Chile, France, Great Britain, Hungary, Israel, Italy, Japan, Lesotho, Poland, South Korea, Turkey, and United States).

Two sophomore and one debut films were chosen to move on to the next phase, listed below in alphabetical order of the title:

The following is a short description of the 3 projects:

The End of Love – In the beginning they made love even though they lived in different countries, but as time passed, their intimacy was killed. At the end, they fall in love for the first time.
Lesson of Love – Yuri is thirty years old and has never had a partner. He is the eldest son of the only cattle farmer left in a remote mountain village, and he has not resigned himself to his solitary life. In a short span of time, he will have to deal with new personal relationships and make some important decisions about his future, which he can no longer postpone.
This is Not a Burial, It's a Resurrection – Amongst the pythonic mountains of land-locked Lesotho, an elderly widow winds up her earthly affairs and prepares to die. When her village is threatened with forced resettlement, she finds a new will to live and in the final dramatic moments of her life, her legend is forged and made eternal.

The 3 selected teams will now participate in two additional workshops, both in Venice, from December 3rd to the 6th, 2018, and from January 11th through the 15th 2019, leading into the possible production of the 3 micro-budget films funded by a grant of 150,000 euro each. The films will be presented at the 76th Venice International Film Festival in 2019.

Overall, in the course of the first six editions, Biennale College – Cinema has produced 19 feature-length films from 1640 projects submitted from every corner of the world. Since 2016, it has also organized the Biennale College Cinema – Virtual Reality, which so far has produced four VR projects presented at the Venice International Film Festivals in 2017 and 2018.

The Biennale College – Cinema is supported by the contribution of Eurimages, the cultural fund of the European Council that covers the travel, lodging and training expenses for a woman director (Eurimages Residency Grant).

For the 2018/2019 edition, the Biennale College – Cinema and Biennale College – Cinema Virtual Reality projects have received generous funding from the MEDIA - Creative Europe Programme of the European Commission – General Direction Connect. The educational activities of the 2018–2019 edition will enjoy the support of the MEDIA funding. This funding is in addition to the support received from the MEDIA Programme for the development of the Venice Production Bridge.