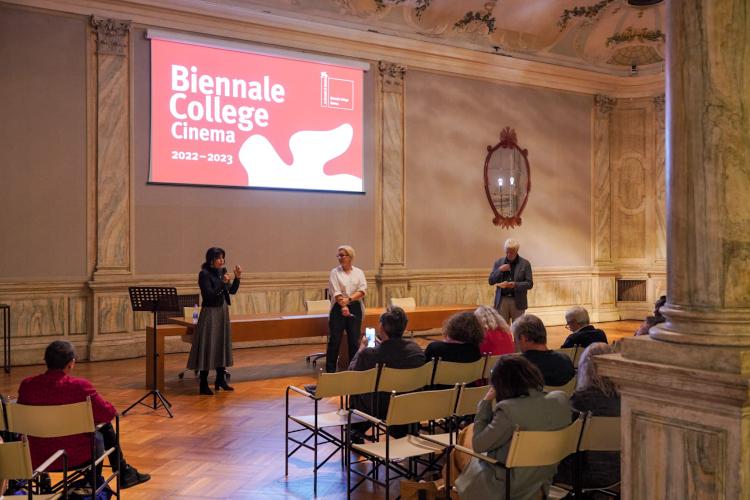 On Wednesday October 12that Ca’ Giustinian (Sala delle Colonne 1st floor), headquarters of La Biennale di Venezia, there will be a presentation of the 12 projects by the 12 teams, composed of a director and a producer, who participated, from 3 to 12 October 2022, in the first workshop of the 11th Biennale College Cinema (2022 – 2023) in Venice.

In one session, from 3 pm to 5 pm, the 12 teams will present their projects and describe the various aspects involved in the creation of their stories, their personal careers, what has influenced them in particular, and their vision of cinema. The teams come from Afghanistan, Armenia, Brazil, France, Georgia, Hungary, India, Iran, Italy, Mexico, Slovakia, the United Kingdom and the United States.

Following this presentation, four teams will be invited to two further workshops, also in Venice, during the months of December 2022 and January 2023, and then begin the production of four feature length films (debut or sophomore film) – including one Italian and at least two by women directors  – which will be supervised and supported, and subsequently presented at the 80th Venice International Film Festival 2023. The eight projects that are not selected will also be assisted and supervised. Starting in 2022, the funds provided for the production of the selected films have been increased from € 150,000 to € 200,000.

I WOULD LIKE TO SEE YOUR PRIVATE PHOTOS (Brazil) – director: Marcelo Grabowsky; producer: Mariana Ferraz

Further information on the 12 projects is available on the website http://collegecinema.labiennale.org/en/.

Biennale College Cinema, organized by La Biennale di Venezia, is supported by the Ministry of Culture – Directorate General Cinema. The main sponsor of the initiative is Vivendi. The sponsor is the Multiversity Group, to which the Università Pegaso is associated. Biennale College Cinema enjoys the academic collaboration of the Gotham Film & Media Institute and the TorinoFilmLab. The educational activities are made possible by the contribution of Creative Europe Media. The Director is Alberto Barbera, the Head of Programme Savina Neirotti.