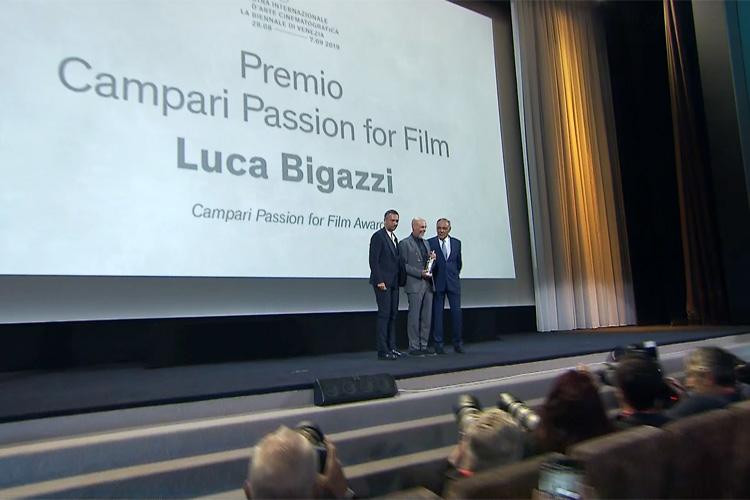 His new work, the series The New Pope by Paolo Sorrentino (episodes 2 and 7), screens Out of Competition on Sunday 1 September at 4:30 pm.

La Biennale di Venezia and Campari are pleased to announce that cinematographer Luca Bigazzi (The Great Beauty, The Way We Laughed, Bread and Tulips) is the recipient of the Campari Passion for Film Award of the 76th Venice International Film Festival. The award, instituted last year at the 75th Venice Film Festival, seeks to highlight the remarkable contribution given by the director's closest collaborators to the fulfillment of the artistic project that each film represents. It is not often that cinematographers, editors, composers, set or costume designers are adequately recognized for their work, which is often key to the quality of the final result. Passion for Film attributes this award to these professional figures (last year the prize was awarded to American film editor Bob Murawski), who are more than just craftsmen: they are artists and co-authors of the films to which they offer the gift of their unparallelled talent.

The ceremony for the award to Luca Bigazzi will take place on Sunday September 1st at 4:30 pm in the Sala Grande (Palazzo del Cinema) before the world premiere screening Out of Competition of his latest work, the series The New Pope by Paolo Sorrentino (episodes 2 and 7) with Jude Law, John Malkovich, Silvio Orlando, Cécile de France, Javier Cámara, and Ludivine Sagnier, produced by Sky with Hbo, Canal+, developed by Wildside and distributed internationally by Fremantle.

The 76th Venice Film Festival will be held on the Lido from August 28th to September 7th 2019, directed by Alberto Barbera and organized by La Biennale chaired by Paolo Baratta.

Alberto Barbera notes, “Italian cinema, from the second half of the 1980s to today, is closely tied to the extraordinary work of Luca Bigazzi. With his personal, unorthodox approach, Bigazzi has revolutionized the way the cinematographer’s work is conducted: limited time dedicated to positioning the lights, a creative and ingenious way of using natural light sources, always glued to the view-finder to pinpoint the best possible angles and the most appropriate movements of the camera. He has absolutely no reverence for 35mm film; on the contrary, he joyfully experiments with the new possibilities offered by technological progress in shooting and manipulating images. His extreme versatility lets him work with all different kinds of directors, whose approach to cinema seems like the opposite of his own (for instance, his surprising partnership with Sorrentino). This dovetails with his talent for speed, precision, a disregard for consolidated rules, and an inclination to adapt himself to all kinds of budgets, all of which have made him the best Italian cinematographer in the past thirty years.”

“We are very proud to confirm our collaboration with the International Film Festival and to have created the “Passion for Film” Award together with its Artistic Direction - states Lorenzo Sironi, Senior Marketing Director for Campari Group - With a common thread that covers everything stemming from passion, a theme that has always been inextricably linked to Campari, the Award aims to promote those who, alongside the director, contribute each day to creating outstanding film.  In particular, we have recognised a crucial artistic figure this year in the shape of the photography director, a true maestro of light who uses images to determine the aesthetic language of a film”.

He began to work in advertising in 1977 as an assistant director and concurrently cultivated his passion for photography. He came to cinema in 1983 and made his debut as a cinematographer with Silvio Soldini in the film Paesaggio con figure, presented at the Locarno Film Festival. Little by little he became increasingly dedicated to cinema, giving up advertising. The partnership with Soldini would continue through many more films, and with him he won the David di Donatello for Best Cinematography in 1999 for Pane e Tulipani (Bread and Tulips). In 1994, he was selected by Gianni Amelio for Lamerica which won him a David di Donatello and a Nastro d'argento. In 1999, for Così ridevano (The Way We Laughed) by Gianni Amelio and L'albero delle pere (Shooting the Moon) by Francesca Archibugi, he won the Osella d'oro in Venice. He has also worked, among others, with Mario Martone, Giuseppe Piccioni, Ciprì and Maresco, Paolo Virzì, Daniele Luchetti, Abbas Kiarostami. He would later be responsible for the cinematography in the films of Paolo Sorrentino starting with Le conseguenze dell'amore (The Consequences of Love), which won him the Nastro d'argento in 2005, then L'amico di famiglia (The Family Friend, 2008), This Must Be the Place (2011) which won him the David di Donatello for Best Cinematographer in 2012, La grande bellezza (The Great Beauty), winner of the Oscar for Best Foreign-Language Film in 2014, Youth – La giovinezza (Youth), best film at the European Film Awards in 2015, The Young Pope (2016), Loro (2018) and The New Pope (2019).

He was the cinematographer for La tenerezza by Gianni Amelio (Tenderness, 2017), Sicilian Ghost Story by Fabio Grassadonia and Antonio Piazza (2017), Ella & John – The Leisure Seeker by Paolo Virzì (2017), and Io sono Tempesta by Daniele Luchetti (2018).