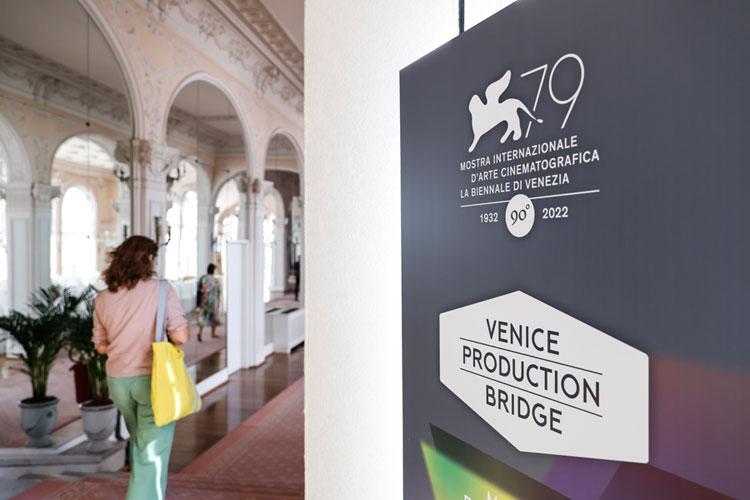 Figures of the 7th edition of the Venice Production Bridge

The initiative was held from 1-6 September 2022 in the context of the 79th Venice Film Festival.

Figures of the
Venice Production Bridge

The 7th Venice Production Bridge – the festival’s film market evolution into a specialised meeting point for completing projects – was held from 1 to 6 September, 2022 within the 79th Venice International Film Festival.

The Venice Production Bridge has been supported by the European Commission -Creative Europe and its MEDIA programme.

31 publishers,  including the projects in the framework of Taipei in Focus  supported by TAICCA, participated in the 7th edition of the Book Adaptation Rights Market (26 in 2021). A total of 450 one-to-one meetings (415 in 2021) were organised with producers for the adaptation from page to the screen of literary rights. Moreover we have add our own focus and this year, we have explored an unvaluable source of adaptations in films, TV series, gaming and immersive contents: the Comics and the Graphic novels.

The Venice Production Bridge has organised the 10th edition of its workshop programme, Final Cut in Venice (September 3 - 5). 63 projects directed by 68 filmmakers were submitted (17 by female directors and 51 by male directors), out of which 8 projects were selected (3 by female directors and 5 by male directors).
Between the 3rd and 4th of September, the 8 works-in-progress, including the projects in the framework of France in Focus supported by UNIFRANCE,  were presented in Sala Pasinetti (Palazzo del Cinema), followed by a Q&A, while on the 5th of September one-to-one meetings are organised between the project teams and financiers.
A total of 39 one-to-one meetings were organized for  the 8 selected projects (31 in 2021 for 6 selected projects ).
This year the FCV workshop benefited from the additional support of the Red Sea International Film Festival within our partners.

14 Video on Demand platforms participated in the market. A VOD Networking Event Session has been launched in association with Eurovod. European VOD platforms and companies which attended the VOD Market Day were able to propose their services to accredited (Gold or Trade pass-holders) international distributors, rights holders and AV professionals.

In association with the European Commission and Creative Europe MEDIA Programme, La Biennale di Venezia organised the Europe in Focus (3 - 4 September 2022), an event which  gathered key industry leaders from all over the world through 2 panels on the themes of VR/AR in Europe: A Flourishing Content Ecosystem and Creating European Stories Through Cross Cultural Networks: Presentation of th EWC and the Creative Connection.

PANELS AND EVENTS AT THE VPB MARKET

A total of 41 panels and events have been held (28 in 2021), of which 36 international and 16 in streaming on the VPB Live Channel of the Venice Production Bridge.

A total of 34 (21 Online VPB Market Screenings in 2021) were presented: 7 Venice 79, 2 Out of Competition, 5 Orizzonti, 2 Orizzonti Extra, 3 Giornate degli Autori, 8 Final Cut in Venice, 7 screenings of films not in Official Selection.

DIGITAL VIDEO LIBRARY
This year 45 titles (34 in 2021) have been submitted to the Digital Video Library on the VPB Website through Festival Scope Pro. The titles come from the following sections of the 79th Venice International Film Festival:

From July 1st  to September 5th: