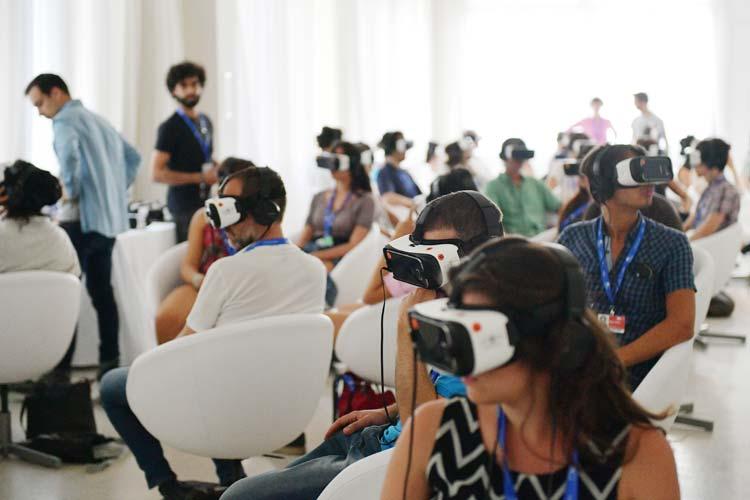 Biennale College Cinema – Virtual Reality: 9 projects selected for the first edition. The VR Theatre will be back for the 74th Festival.

Biennale College Cinema – Virtual Reality: 9 projects selected for the first edition. The VR Theatre will be back for the 74th Festival.

The Competition – named Venice Virtual Reality – will present up to a maximum of 18 VR films, and will be held from August 31st to September 5th 2017 at the VR Theatre (Palazzo del Casinò, Lido di Venezia).

The Venice International Film Festival was one of the first festivals in the world to express interest in Virtual Reality. The construction of a VR Theatre in 2016 and the screening of a series of experimental short films, including the world premiere presentation of the first feature-length VR film (Jesus VR), aroused enormous interest among the participants in the Venice Production Bridge and the many spectators of the Festival.

As a contribution to the recognition of Virtual Reality as an emerging art form, La Biennale di Venezia has therefore recognized the importance of supporting the authors who choose to adopt this modern technology and use it as a new means of artistic expression, and has decided that the time is ripe to institute this first competition.

Last January La Biennale launched the first edition of the Biennale College Cinema – Virtual Reality, with the intent of selecting 9 teams composed of a director and a producer, who will work on the development of Virtual Reality projects lasting between 10 and 20 minutes, supporting them along the way through every aspect of the creative process, the production and the process of building an audience, identifying target markets and finding funding.

Biennale College Cinema – Virtual Reality is made possible with the support of grants from the Creative Europe-Support for Training programme and the Netherlands Film Fund, and enjoys the collaboration of the TorinoFilmLab.

The 9 projects selected for this first edition (director/producer) are:

Of the 9 projects that will be developed during the workshop, 2 VR projects will receive a contribution towards production of € 30,000 each thanks to the support of Sony Corporation, and will subsequently be presented at the 74th Venice International Film Festival 2017.

The remaining 7 projects will be given visibility during the Venice Production Bridge, as an integral part of the activities of the Gap Financing Market. For the second year in a row the Market of the Venice Production Bridge will present a further 8 VR projects in an advanced stage of development. There will therefore be a total of 15 VR projects currently under development presented by the Biennale di Venezia.

For the coming 74th Venice International Film Festival 2017, the VR Theatre will be set up again with dedicated individual viewing stations for VR films and 3 interactive stations, to screen:

-    Previous work made by the 8 teams selected for the Venice Production Bridge;

The VR Theatre will be operational from August 31st to September 5th, on the 1st floor of the Palazzo del Casinò, concurrently with the second edition of the Venice Production Bridge.