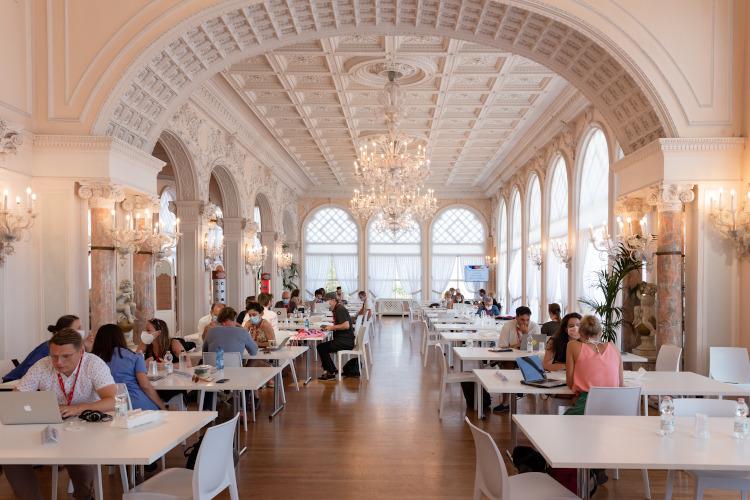 The 3-day Venice Gap-Financing Market will present 57 projects from around the world in the final stages of development and funding. More than 250 project applications have been received from around the world and the selection reflects the great diversity of backgrounds, stories and talents, aesthetics, genres and budgets of the projects submitted for consideration.

The selection is divided as follows:

The Venice Gap-Financing Market will be setting up one-to-one meetings between the teams (producer and director) of the 57 projects and top industry decision-makers (Producers, Private and Public Financiers, Banks, Distributors, Sales Agents, TV Commissioners, Internet and Video-platforms, Institutions, Post-Production Companies…).

The Book of Projects, detailing each project, will be emailed to professionals from the film industry, to entitle them to request 30-minute one-to-one meetings with the teams of the selected projects through the Venice Production Bridge website (veniceproductionbridge.org).
Thanks to the VPB Website , the VPB Office will  support the teams and the registered professionals in organizing tailor-made meetings.

- Fiction Films: 23 projects for feature-length fiction films (10 from Europe and 13 international), that need to complete their funding package with minority shares in the co-production, having at least 70% of the funding in place.

- Documentaries: 7 projects (2 from Europe and 5 international) for narrative or creative documentaries (fulfilling the same requirements as the fiction films above).

13 VR Immersive Reality Story projects (10 from Europe and 3 international), including fiction, documentary, animation film and other interactive installation based experiences. The projects include both original concept and adaptations. All projects have secured 30% of their budget and have this financing in place.

11 projects, that have been developed during the workshop of Biennale College Cinema VR, 5th edition, and that have reached different stages of development, pre-production and post-production.

3 projects, that have been developed during the first workshop of Biennale College Cinema, 9th edition, and that have reached different stages of development and pre-production.

The 6th edition of the Book Adaptation Rights Market (September 3-5, 2021), organised as part of the Venice Production Bridge, will take place in-person at the Excelsior Hotel on the Lido di Venezia, during the forthcoming 78th Venice International Film Festival (September 1-11, 2021).

The Book Adaptation Rights Market will offer 26 selected, international publishing houses and literary agencies a dedicated area within the Venice Production Bridge and the possibility for one-to-one meetings between publishers and producers. The meetings will allow to foster lasting relationships and to make deals on the adaptation of novels, drama, children’s literature, short stories, comics, graphic novels, essays, biographies.

The Book Adaptation Rights Market will enable the invited publishers to propose their entire catalogue for film adaptation, rather than focusing on a single book, as opposed to other events dedicated to publishing within the context of film festivals.

A brochure gathering all the publishers and literary agents and their new titles as well as their catalogue will be sent to all registered producers beforehand.

As of today, the 26 publishers and literary agents invited to this year's event of the Book Adaptation Rights Market are:

Ever since its first edition during the 73rd Venice International Film Festival, the Book Adaptation Rights Market has met with great success as proven by the publishers’ requests to participate again in this event as well as by a growing demand from the producers looking for original intellectual properties (IP).

Virtual one-to-one meetings organised online with the publishers attending in-person will also be possible for those accredited professionals unable to travel to Venice.

The new brochure that gathers all the details of the invited publishers and literary agents for this year's edition of the Book Adaptation Rights Market will be available soon  on the section ‘download’ of the Venice Production Bridge Website.