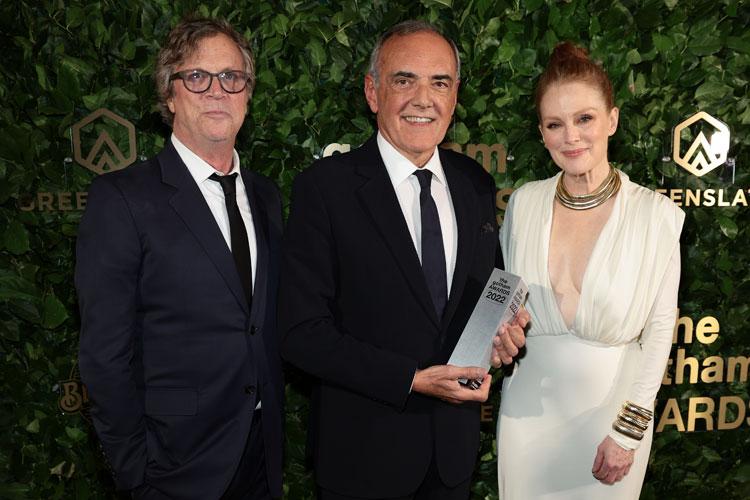 The awards ceremony was held yesterday in New York for the 2022 Gotham Awards, which every year acknowledge the most innovative independent cinema and are the first important film awards of the fall season.

The Gotham Awards Impact Salute was awarded this year to the Venice International Film Festival of La Biennale di Venezia and its artistic director Alberto Barbera, for the unceasing support they have offered independent American cinema over the years.

The acknowledgment was delivered during the Gotham Awards ceremony to Alberto Barbera by actress Julianne Moore and director Todd Haynes, who spoke words of praise.

Alberto Barbera stated: “I thank you from the bottom of my heart for this prestigious recognition of our work. Supporting independent cinema is not a choice: it is a duty simply because independent filmmakers are the salt of the earth. They experiment rather than living off their returns, they take risks rather than relying on proven formulas; they innovate rather than reproducing what we already know.  In so doing they change the way we look at the world, and at each other”.

In announcing the award – which comes on the 90th anniversary of the birth of the Venice Film Festival – Jeff Sharp, the Executive Director of the Gotham Film & Media Institute of New York, stated: “It is a privilege to award this year’s Gotham Awards Impact Salute to the Venice International Film Festival of La Biennale di Venezia, the oldest and one of the most influential film festivals in the world and to its artistic director Alberto Barbera. In addition to premiering some of the greatest films each year, Venice has over the course of many decades helped to elevate the work of filmmakers such as Darren Aronofsky, Sofia Coppola, Matteo Garrone, Todd Haynes, Spike Jonze, Regina King, Ang Lee, Kenneth Lonergan, Terrence Malick, Kimberly Peirce, Kelly Reichardt, and Paolo Sorrentino, with world premiere screenings. The Festival is produced by La Biennale di Venezia, one of the most prestigious international cultural institutions, chaired by Roberto Cicutto”.

Other motion pictures presented at the Venice Film Festival produced by La Biennale di Venezia were nominated for the 2022 Gotham Awards in various categories: All the Beauty and the Bloodshed by Laura Poitras, Athena by Romain Gavras, The Banshees of Inisherin by Martin McDonagh, Bones and All by Luca Guadagnino, The Cathedral by Ricky D’Ambrose, Dos Estaciones by Juan Pablo González, Saint Omer by Alice Diop, and The Whale by Darren Aronofsky.