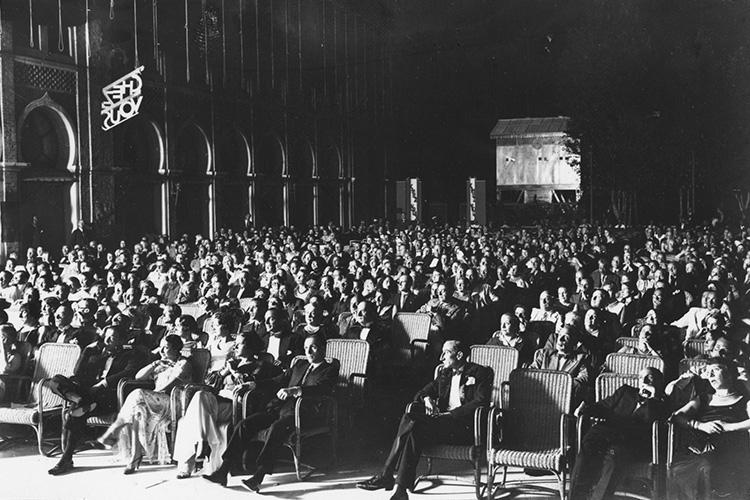 An exhibition made from materials preserved in the Historical Archive of La Biennale.

Celebrating the 90th anniversary of the Venice International Film Festival

On Friday July 8thin Venice (at 12 noon), in the Portego of Ca’ Giustinian (San Marco 1364, free admission), there will be the inauguration of the exhibition titled The first Venice International Film Festival from the Archive of La Biennale di Venezia, which the Historical Archive of the Contemporary Arts (ASAC) has organized to celebrate the 90th anniversary of the Venice International Film Festival.

The exhibition at Ca’ Giustinian illustrates and documents that first edition which took place from 6 to 21 August 1932 on the terrace of the Hotel Excelsior on the Lido di Venezia, under the name Esposizione Internazionale d’Arte Cinematografica, before it changed in 1934 to Mostra.

On exhibit – from materials preserved in the Historical Archive since 1932 – will be the original posters and playbills of the programmes, still photos from the films that were shown, topical photos in the context of the Lido of the time, the documents and correspondence that testify to the origins and organization of the Venice Film Festival, the press releases and press reviews.

Among the materials is the letter in which Louis Lumière, the “father” of cinema, agrees to be a member of the Honour Committee, as well as the voting form for the audience to choose the best actress and best actor, as well as the directors of the “most amusing”, the “most moving” and the “most original” films and the film demonstrating the “greatest technical perfection”.

There will also be a screening of documentaries from the Istituto Luce about Venice and the Lido of the time, and a 30’ film with a selection of scenes from the films presented at that first edition in 1932.

“The most noble and ideally warranted motivation underlying that successful and forward-looking first edition – observe the President of La Biennale, Roberto Cicutto and the Director of the Venice Film Festival, Alberto Barbera – was to assert once and for all the artistic nature of cinema, a new medium that originated as something of a freak show only to quickly become established as the greatest and most popular form of entertainment for the masses, raising it to the level of dignity of the other Arts that La Biennale had dealt with up to that time”.

The International Conference in the Biennale Library at the Giardini

The celebration of the 90th anniversary of the Venice International Film Festival of La Biennale di Venezia will continue on Saturday July 9thwith an international conference in the Library of the Historical Archive of La Biennale (ASAC) at the Giardini (10:30 am – 6 pm). The greetings by the President Roberto Cicutto, will be followed by the presentation – with a conversation between the Director Alberto Barbera and the author – of the Italian edition of the new History of the Venice International Film Festival written by Prof. Gian Piero Brunetta, the product of the collaboration between La Biennale and the Marsilio publishing company. The conference will feature the participation of historians, critics, teachers and esteemed speakers on the value of the historical and cultural experience of the Venice Film Festival.

Screenings in the Sala Grande of the Palazzo del Cinema

The celebrations on July 9th will conclude in the evening with the screenings at 9 pm in the historical Sala Grande of the Palazzo del Cinema on the Lido, of two masterpieces that were in the line-up of the first edition of the Venice Film Festival in 1932: