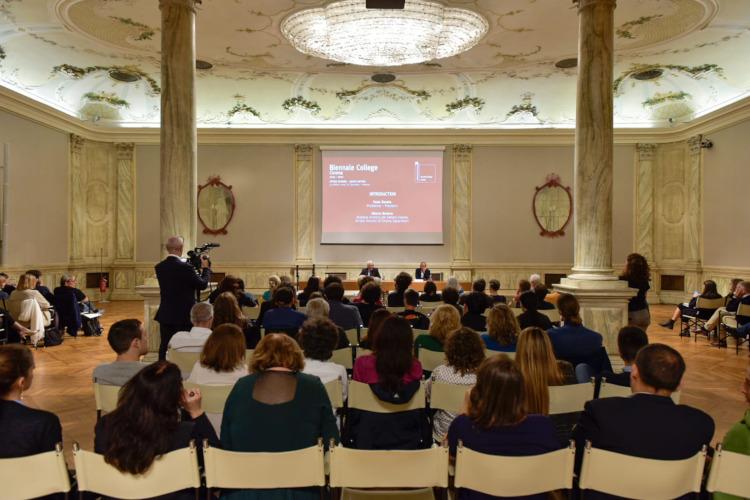 The presentation of the 12 projects that participated in the first workshop took place on Monday October 14th.

The eight edition of the Biennale College Cinema

La Biennale di Venezia announces the presentation of the 12 projects that participated in the first workshop of the 8th Biennale College Cinema (2019/2020) in Venice from the 5th to the 14th of October 2019. The working session, which took place on Monday October 14th 2019 in Venice at La Biennale headquarters at Ca’ Giustinian, was introduced by President Paolo Baratta and the Director of the Cinema Department Alberto Barbera. In a new decision this year, La Biennale will increase the number of films it will support to 4 of the films in the selection, of which at least 2 must be directed by women.

This is the programme by La Biennale di Venezia that cultivates young talents by offering them the opportunity to work side by side with the masters, to make feature-length micro-budget films. The Biennale College is an innovative and complex experience that engages every Department of La Biennale di Venezia.

The 12 teams that submitted the selected projects (consisting of a director and a producer), hailing from Australia, Brazil, China, Finland, France, Italy, Macedonia, Portugal, Spain and the United States, participated in a preliminary workshop that was held in Venice from October 5th to 14th 2019.

In a working session from 3 pm to 6 pm on Monday October 14th, the 12 teams present their projects, offering a brief description of various aspects involved in the creation of their stories, their personal careers, their special influences and their vision of cinema.

Starting in 2019/2020 the number of films that will enjoy the support of La Biennale is extended to 4 films in the selection (of which at least 2 must be directed by women). Following this presentation, 4 teams will be invited to attend two additional workshops, also to be held in Venice, in the months of December 2019 and January 2020, following which they will begin production on 4 feature-length films (debut or sophomore films) of which one will be Italian. The films will be low-cost, supported by a grant of 150 thousand euro, and will subsequently be presented at the 77th Venice International Film Festival 2020. The 8 projects that are not selected will also be assisted and supervised.

The 12 projects selected for this first phase of the Biennale College Cinema are:

La Calle Pura - Alfredo Chiarappa (director, Italy), Angelo Rocco Troiano (producer, Italy)
In day-to-day life, in the dreams and fears of Brian, a shy but determined Afro-Cuban boy in his late teens, who dreams of becoming one of Cuba’s most famous singers, and in his relationship with his extended family, we can glimpse the future of the island 60 years after the Revolution.

La Santa Piccola - Silvia Brunelli (director, Italy), Francesca Maria Scanu (producer, Italy)
Three teenagers live in a sunny neighbourhood in Naples, with only their tiny dreams. There is also a baby girl whom everyone calls “the holy baby” because she sees the virgin Mary. She could be the one who brings a miracle to make their dreams come true, but that hope is just a lie that will end in summertime, while the neighbourhood awaits another new saint to believe in.

Babado - Camila Freitas (director, Brazil), Pedro Duarte (producer, Portugal)
“Babado” is a term used by young people in the Amazonian tri-border of Brazil, Peru and Colombia to refer to multiple kinds of economic-sexual exchanges. Among these young people are the members of the Afro-Brazilian Umbanda temple of Father Jairo, a former transsexual sex worker like most of those he has initiated in the temple. In a constant experience of performativity, the group constantly adorns and reinvents their bodies: be it for the embodiment of entities in the rituals, be it for their work in the streets.

Good Job - Di Shen (director, China), Lizhi Chen (producer, China)
The company is fake, the marriage is fake, the daughter is fake, but the life and love are real.

He That Shall Not Be Named (Mon Père, Le Diable) - Ellie Foumbi (director, USA), Joseph Mastantuono (producer, France)
An antisocial African refugee’s quiet existence in a sleepy mountain town in the south of France is upended when she suspects that the new priest at her church is the warlord who slaughtered her family.

Housekeeping for Beginners - Goran Stolevski (director, Macedonia), Marija Dimitrova (producer, Macedonia)
A lesbian woman in Macedonia is forced to raise her dead partner’s two daughters. In order to legally adopt them, she has to first convince her (gay, male) best friend to marry her. Like her, he never has and never will want to be a parent.

Last Minutes - Pedro Collantes (director, Spain), Daniel Remón (producer, Spain)
“Last Minutes” tells the story of four different encounters taking place minutes before someone’s departure from life. Each of these encounters happens to be the last human interaction one of the characters has before leaving this world. Unknowingly at death’s door, the characters who populate the film experience rage, love, lust, tenderness, greed or empathy, witnesses of the blissfully ignorant passage of time to death.

The Plant Under the Wild Land - Diego Zon (director, Brazil), Ana Cristina Viegas (producer, Portugal)
In the effort of his tired breathing, Antonio grows older between his plants growing on the terrace and the dusty VHS tapes that he often watches with Brando. One day, Antonio falls asleep.

The Sound of Light - Julietta Boscolo (director, Australia), Grayson Propst (producer, USA)
A gifted teen singer - too ashamed of her poor background to sing in public - masquerades as middle class in order to win a singing competition and a chance at a fun new life.

Violenta - Juan Carlos Zaldiva alias Violenta Flores (director, USA), Gill Holland and Shaz Bennet (producers, USA)
VIOLENTA is a 72-minute feminist art/horror film about a vampire vigilante of ambiguous sex, who haunts the old quarter of a colonial city, as she struggles to attain closure with her biological mother and with a past rooted in domestic violence while feeding on those who exploit women, the poor and  the marginalized.

Teamwork, plenary classes, individual sessions and exchanges of ideas: this was the programme of the first workshop for the 8h edition of the Biennale College - Cinema, which was held at San Servolo (Venice) from October 5th through 14th, curated by Alberto Barbera and the Team of the Biennale College – Cinema (Savina Neirotti, Head of Programme).

The 12 project teams worked closely with leading figures in international and Italian independent cinema. The goal was to discuss their projects and the experiences of low-budget filmmaking, meeting directly with the tutors and with the other teams.

Depending on their role, the tutors and consultants were given specific assignments and worked in different ways with the teams as a whole:

Each of them coordinated the work of a group that included 4 different projects, working with the group as a whole, and directly with the individual teams assigned to them. Each group discussed every aspect of their projects in detail, making and receiving suggestions from the other teams, and putting together all the ideas that came up in the other sessions.

The production issues for each project were discussed, taking advantage of each group’s capabilities to share experiences and best practices in micro-budget filmmaking.

Each script consultant worked with 4 dedicated projects throughout the entire workshop and coached the teams in writing the step outline and the screenplay.

Both advisors concentrated on the visual aspects of the projects. Paul Tyler led an individual workshop with each team, the purpose of which was to build their projects as effectively as possible. Alec Von Bargen brought the participants his experience as an artist; he held individual sessions with each team, which helped them find the central visual theme for their project.

In group and plenary sessions, the teams were assisted in developing a public presentation of their project, learning to describe the core of the project.

Specifically, the workshop programme was divided into several different activities, in which the teams worked in groups or together:

-     Group sessions: three groups in all, consisting in four projects each.

-     Team sessions: with the assigned tutor; with each tutor individually and with the three tutors together;