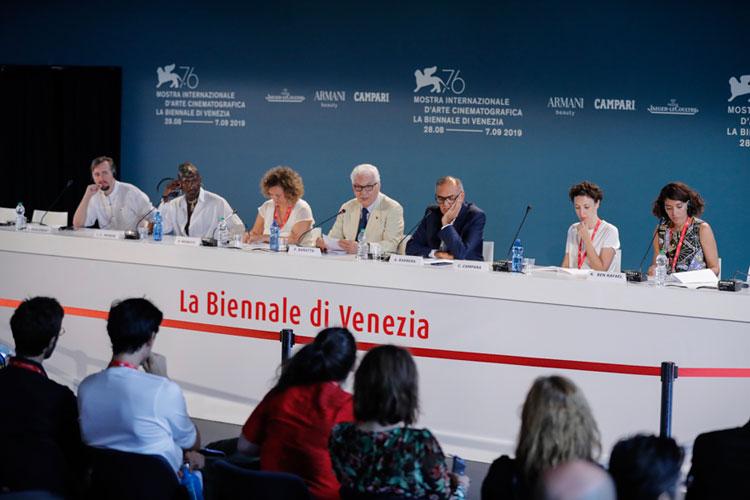 Biennale College: some remarks so far and the new projects

Twelve new projects have been selected for the 8th edition of the Biennale College – Cinema 2019/20.

On the occasion of the 76th Venice International Film Festival, the President of the Biennale Paolo Baratta took stock of the Biennale College, an initiative which integrates every department of La Biennale di Venezia.

In 2019 – 2020, the number of movies receiving support from the Biennale will be increased to four of the selected films (of which at least two by female directors).”

The 12 projects selected for this first phase of Biennale College – Cinema are:

Information about the 12 projects is available at the following website:
http://collegecinema.labiennale.org/en/

After the workshop which will be held in Venice from October 5-14, 2019, four of these twelve projects (including one from the Italy section) will be selected to receive support from the Biennale to cover production costs, which cannot exceed 150,000  Euros, and will be presented at the 77th Venice Film Festival in 2020.

Biennale College – Cinema promotes new film talents, offering them the opportunity to work in contact with top professionals to make micro-budget movies. 4 of these 12 projects (one of which Italian) will receive support totaling 150,000 Euros, to make a maximum of four feature films (first or second films) which will be presented in 2020 at the 77th Venice Film Festival.

The educational activities of the Biennale College Cinema – Virtual Reality projects receive important financing from the MEDIA Programme – Creative Europe of the European Commission – Connect Directorate General. This contribution is in addition to the support which the MEDIA Programme gives to develop the Venice Production Bridge.

Furthermore, the call was announced for the fourth edition of  the Biennale College – Cinema Virtual Reality for 2019-2020.

Applications can be presented starting Monday, September 2 and until October 22, 2019, by accessing the website http://collegecinema.labiennale.org/en/ which features a dedicated application form.

Biennale College - Cinema Virtual Reality is a program of the Biennale di Venezia; its goal is to explore the most innovative and captivating technology of the moment: Virtual Reality. By navigating the aesthetic and narrative opportunities offered by this audio-visual format, Biennale College Cinema – Virtual Reality offers professionals from the world of the arts and film, who have a rich background of experience in various fields, the necessary expertise to work in the fascinating and interactive 360° format. Thanks to the support of international experts who work in this sector, Biennale College Cinema – Virtual Reality helps independent and creative filmmakers from all over the world to try their hand at virtual reality, and teaches them how to seamlessly adapt their own skills to this field. During the program, the participants will acquire specific know-how regarding 360° immersive storytelling, redefining the relationship between the story and the audience.