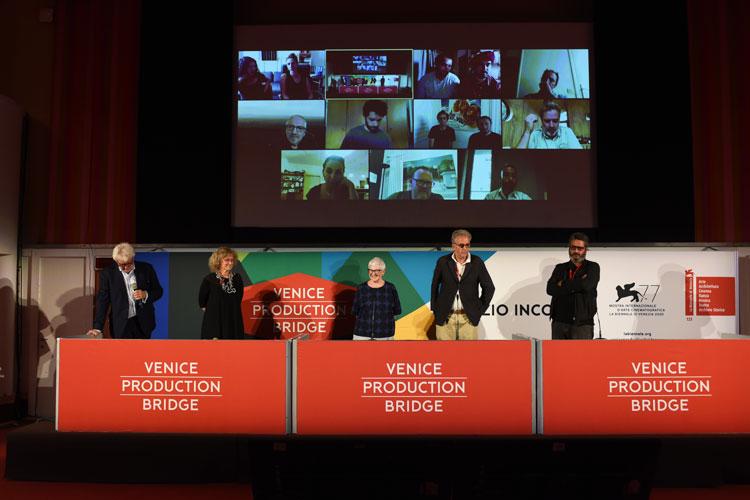 Final Cut in Venice: awards of the eighth edition

For the fourth year, La Biennale di Venezia will give a cash award of € 5,000 to support the best film in post-production.
The Jury of the La Biennale di Venezia Prize, composed of Marie-Pierre Macia (MPM Film) Antonio Medici (BIM Distribuzione), and Michel Zana (Sophie Dulac Distribution) has awarded the film:

«For the strength of his cinematic proposal, for his original look at the existential questions of the new generation in his country today the Jury of the La Biennale Prize recognises the director as an emerging talent. Considering that the film is still at editing stage, the jury hopes that the director will find the right and necessary length.»

Support to films in post-production

The Jury of the Supporters of the 8th edition of Final Cut in Venice has decided to give their support to the following films in post-production:

SOULA by Salah Issaad (Algeria, France)
has been supported by:

- Laser Film is giving € 15,000 for the color correction of a feature-length film for up to 50 hours of work (technician included);
- Mactari Mixing Auditorium (Paris) is offering up to € 15,000 for the sound mixing of a feature length film (up to 12 days of work, sound re-recording mixer not included);
- MAD Solutions is offering for feature fiction projects an MG of $ 10,000 for marketing, publicity and distribution in the Arab World for one Arab project;
- Titra Film (Paris) is offering up to € 5,000 for color-grading; up to € 3,000 for the production of a DCP master, i-Tunes, Google or Netflix files; up to € 2,000 for French or English subtitles (translation not included);
- Cinémathèque Afrique of the Institut Français (Paris) is offering the Prize “Coup de cœur de la Cinémathèque Afrique”, consisting of the acquisition of the non commercial and non exclusive broadcasting rights for 7 years with a value of € 4,000 – 6,000 depending on the genre, length and available territories of the film;
- Festival International du Film d’Amiens is offering its participation in the production costs of a DCP (€ 2,500);
- Festival International de Films de Fribourg is offering its participation in the production costs of a DCP (€ 2,500);
- Eye on Films is giving the possibility to benefit from the Eye on Films label, that will present the film to distributors and festivals affiliated to EoF and will contribute to the communication of the film for a value of € 2,500 during its world premiere in an A-category festival.

- Sub-Ti Ltd. (London) is offering up to € 7,500 for the production of the DCP master and Italian or English subtitles;
- Sub-Ti Access Srl (Turin) is offering up to € 7,500 for the accessible contents of the film for audiences with sensory disabilities: subtitles for the deaf and hearing impaired and audio description for the blind and visually impaired, with audio subtitles, in Italian or English. The SDH file and the audio described soundtrack for DCP will be provided;
- Rai Cinema is offering € 5,000 for the purchase of two-year broadcasting rights.

THE BLUE INMATES / LES PRISONNIERS BLEUS by Zeina Daccache (Lebanon)
has been supported by:

- El Gouna Film Festival is offering $ 5,000 awarded to one of the Arab projects and an invitation to participate in the industry platform CineGouna;
- The Organisation Internationale de la Francophonie (OIF) is offering € 5,000 to an African or Arab film from a member-country of La Francophonie.