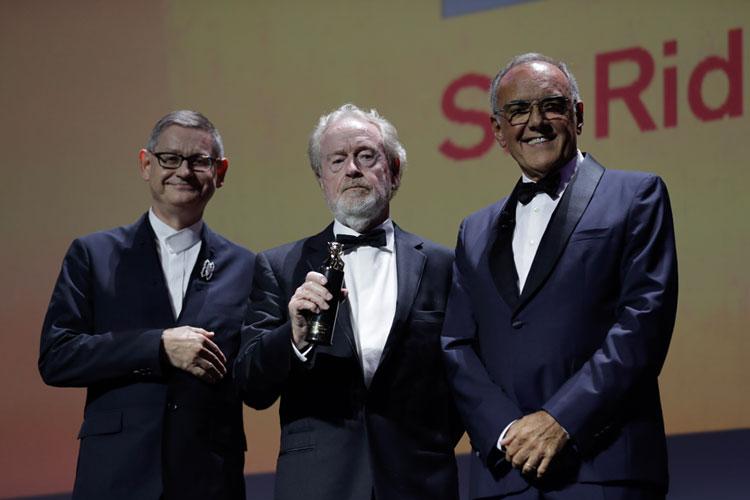 The award ceremony will take place on 10th September at 9:15 pm in the Palazzo del Cinema, before the screening Out of Competition of his new film, The Last Duel.

Cartier Glory to the Filmmaker Award

La Biennale di Venezia and Cartier are pleased to announce that the legendary British director and producer Sir Ridley Scott (Gladiator, Blade Runner, Alien) (photo © Scott Council) is the recipient of the Cartier Glory to the Filmmaker award of the 78th Venice International Film Festival (September 1 - 11, 2021), dedicated to a personality who has made a particularly original contribution to the contemporary film industry.

The award ceremony for Sir Ridley Scott will take place on Friday September 10th 2021 in the Sala Grande (Palazzo del Cinema) at 9:15 pm, before the screening Out of Competition of his new film, The Last Duel (USA, UK, 142’) with Matt Damon, Adam Driver, Jodie Comer, Ben Affleck. The Last Duel, a gripping tale of betrayal and vengeance set against the brutality of 14th century France, comes from 20th Century Studios and visionary filmmaker Sir Ridley Scott.

The 78th Venice International Film Festival of La Biennale di Venezia will be held on the Lido from September 1st to 11th, 2021, directed by Alberto Barbera.

Welcoming this announcement, the Director of the Venice Film Festival Alberto Barbera has stated: “His personal approach to genre films, which successfully reconciles the requirements of entertainment, the expectations of the general public and the demands of critics, is the most distinctive element of Ridley Scott’s filmmaking. Had he directed one film only, the English director – who made his debut in film at the age of 40 with The Duellist, before capturing the attention of the general public with the global box-office success Alien – would still have earned his rightful place in the Olympus of the great filmmakers of contemporary cinema thanks to Blade Runner, the most influential film in modern science fiction, which became a benchmark for decades to come. Throughout his amazing and prolific career, which counts just short of thirty films completed with astonishing frequency, Scott has demonstrated his ability to navigate the most disparate genres with ease, injecting new lifeblood into each one of them. In Thelma & Louise he seemed to anticipate years ahead of time today’s debate on the status of women and their compulsion to assert themselves. In Gladiator he revived the sword-and-sandal genre, which had been abandoned after being thoroughly exploited in the late 1960s, whereas in Black Hawk Down he imposed a new, amazing standard in the participatory realism of war movies. In The Martian, finally, he successfully introduced tones of light comedy into a typically dystopic situation. His indisputable merits include the extraordinary visual talent and painterly taste he has demonstrated in the creation of sumptuous Baroque and graphically majestic images, accompanied by a rare and priceless talent for directing actors.”

”For this first edition of the Cartier Glory to the Filmmaker Award, Cartier is proud to join the Venice Film Festival in paying tribute to Ridley Scott’s outstanding work, talent and particularly original contribution to the contemporary film industry”, has declared Arnaud Carrez, Chief Marketing Officer of Cartier. “Ridley Scott has enriched the world of cinema with his productions since the 70s and has unequivocally become a mainstay in contemporary artistic creation”.

Sir Ridley Scott, one of the world’s foremost directors and producers, is most known for his work on films such as Thelma & Louise, Alien, Black Hawk Down and Blade Runner. His film epic Gladiator won the Academy Award, Golden Globe®, and BAFTA Awards for Best Picture, as well as the Academy Award for Best Actor in a Leading Role for Russell Crowe. Throughout his illustrious career, Scott has also been lauded by the Emmy Awards, Cannes Film Festival and the PGA Awards. In 1968, Scott formed RSA as a commercial production house for some of the world’s most recognized corporate brands. In 1995, Scott formed Scott Free Productions to serve as a production company for his film and television projects such as Blade Runner 2049, Murder on the Orient Express, Hannibal, American Gangster, Concussion, the critically-acclaimed CBS drama, The Good Wife, its spin-off The Good Fight, the highly anticipated upcoming HBO Max sci-fi series, Raised by Wolves, and the hit telefilms Killing Lincoln, Killing Kennedy, and Killing Jesus. The most recent feature films produced by Scott Free include Jake Scott’s American Woman, Gabriela Cowperthwaite’s The Friend, and Wash Westmoreland’s Earthquake Bird. As a director, Scott’s recent projects include Alien: Covenant, the sequel to Prometheus, starring Michael Fassbender and Katherine Waterston, and All the Money in the World, starring Christopher Plummer, Michelle Williams and Mark Wahlberg.  Upcoming films include The Last Duel starring Matt Damon, Ben Affleck, and Jodie Comer; House of Gucci starring Lady Gaga, Adam Driver, Jared Leto, and Al Pacino; and Kit Bag with Joaquin Phoenix set to star as French military leader and emperor Napoleon.

From 2021, Cartier partners with La Biennale di Venezia to become Main Sponsor of the Venice International Film Festival and jointly contribute to supporting contemporary film creation. As part of this collaboration, and from this year onwards, Venice International Film Festival and Cartier will pay tribute to outstanding filmmakers through the Cartier Glory to the Filmmaker Award, dedicated to a personality who has made a particularly original contribution to the contemporary film industry. The award ceremony will take place in Lido di Venezia and it will be a unique occasion to celebrate talent, creativity, and emotion. Art and culture have always been intimately linked to the history of Cartier. This new collaboration with one of the most renowned international cultural events builds on the Maison’s long-lasting commitments to preserve cultural heritage and support contemporary artistic creation.