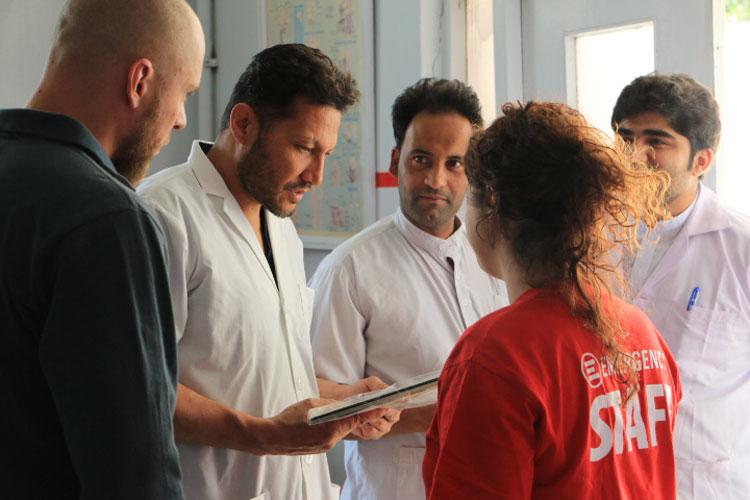 The world-premiere films by Nate Parker and by Graeme A. Scott & Buddy Squires set to enter the Sconfini section.

Two new films in their world premiere screenings, American Skin by American director, actor, screenwriter and producer Nate Parker (The Birth of a Nation) and Beyond the Beach: The Hell and the Hope, a documentary about the work of the NGO, 'Emergency', the debut as a director of English film producer Graeme A. Scott and American cinematographer Buddy Squires, complete the line-up in the Sconfini section of the 76th Venice International Film Festival.

The screening of American Skin will be attended by Spike Lee, who will present the film together with the director Nate Parker, and will discuss with him at the end of the projection.

The 76th Venice Film Festival, directed by Alberto Barbera and organized by La Biennale di Venezia, will be held on the Lido from August 28th to September 7th 2019.

American Skin by Nate Parker (Sconfini)
Denied of a fair trial following the shooting death of his teenage son (his only child) by a white police officer, American Skin, weaves a layered story in the tradition of Sidney Lumet’s 12 Angry Men and Dog Day Afternoon, that follows the desperate actions of a Black Iraqi War Vet who seeks justice for his son.

Beyond the Beach: The Hell and the Hope

Beyond the Beach: The Hell and the Hope by Graeme A. Scott (Sconfini)
This is the debut as a director of English producer Graeme A. Scott. He worked on this film with cinematographer Buddy Squires, who has been nominated for an Oscar and several Emmy Awards. Beyond the Beach: The Hell and the Hope gives a glimpse into the lives of doctors, nurses and volunteers who have given up their everyday lives to work in war-torn parts of the world for the Italian NGO 'Emergency'. Created in 1994 by war surgeon Dr. Gino Strada, Emergency staff have helped save over 9 million lives around the world. From treating frontline injuries caused by explosions in Kabul to the monotony of Refugee Camps in Iraq, as well as their deployment on the MOAS rescue boats off the coast of Libya, the staff explain how they could not simply stay at home and do nothing knowing they could ‘do something’. We see their laughter, tears and, at times, frustration doing what very few people are brave enough to do and we learn the hardships and emotional stress that they must endure to carry out their missions while never losing hope…

Terence Nance (Jury for the Venice Debut Film Award – Luigi De Laurentiis)
Terence Nance was born in Dallas, Texas in what was then referred to as the State-Thomas community. Nance’s first feature film, An Oversimplification of Her Beauty, premiered at the 2012 Sundance Film Festival and was released theatrically in 2013. In 2014, he was named a Guggenheim Fellow. In the summer of 2018, Terence's television series Random Acts of Flyness debuted on HBO to great critical acclaim, and was renewed for a second season by the network. The New York Times hailed the show as “a striking dream vision of race” and “hypnotic, transporting and uncategorizable” adding that “it’s trying to disrupt and redisrupt your perceptions so that, finally, you can see.” Additional film work includes Swimming in Your Skin Again and Univitillen, which premiered at the 2016 Sundance Film Festival and the 2016 New York Film Festival, respectively. In 2017, Nance premiered a performance piece, 18 Black Boys Ages 1-18 Who Have Arrived at the Singularity and are Thus Spiritual Machines at Sundance. Nance is currently at work on healing, curiosity, and interdimensionality, and resides in Bedford-Stuyvesant, Brooklyn.

Nate Parker (American Skin)
The American actor, director, screenwriter and film producer Nate Parker, won his first role in film in 2005 with a small part in the film Cruel World, followed by other minor roles in Dirty, Pride and The Great Debaters, starring and directed by Denzel Washington. In 2008 he was cast in the film The Secret Life of Bees by Gina Prince-Bythewood. In 2008 he won his first starring role in Rome & Jewel, an interracial love story and hip-hop reinterpretation of William Shakespeare's Romeo and Juliet. In 2012, he acted in Red Tails and earned various acknowledgments for his performance in Arbitrage, beside Richard Gere and Susan Sarandon. In 2013, he acted with Rooney Mara and Casey Affleck in the dramatic film Ain't Them Bodies Saints, and the following year he was in the cast of the action film Non-Stop. In 2014, he starred with Gugu Mbatha-Raw in the film Beyond the Lights, which won him a nomination as Best actor at the NAACP Image Awards. Throughout his career, he has directed and produced many short films, and in 2016 he made his debut as a director with the feature-length film The Birth of a Nation. The film tells the story of Nate Turner, the slave who led a slave rebellion in Southampton County, Virginia in 1831. In addition to directing the film, Parker was also its star, screenwriter and producer. The film was previewed at the Sundance Film Festival in 2016, where it won the Audience Award and the Grand Jury Prize.

Graeme A. Scott (Beyond the Beach: The Hell and the Hope)
Graeme Scott started his first production company at the age of eighteen. By twenty-one he had produced and directed his first documentary in the Arctic Circle and had his first music video broadcast on British channel ITV. Alongside his music and television work, Graeme set up a design and technology company with clients such as Warner Brothers; Universal; American Pie; Austin Powers; Girls Aloud; and Microsoft. These design projects led to Graeme working for Steve Jobs at Apple in the late 1990s. Returning to his passion for music, Graeme took on Sam Smith as a new young artist, developing his image and sound. Working alongside writers and producers behind the likes of Queen, Jessie J and JLS, Graeme signed Sam Smith’s ‘Ecstasy’ as the title track to Irvine Welsh’s film Ecstasy, before co-writing and recording the track ‘Little Sailor’ which won Sam his first recording contract. Graeme teamed up with Kathy A. LoPrimo, founding Dover Street Entertainment and developing TV and film projects.

Buddy Squires (Beyond the Beach: The Hell and the Hope)
Buddy Squires is an Oscar-nominated filmmaker and Emmy-winning Director of Photography. His credits include six Oscar-nominated films; one Academy Award winner; twenty-two Emmy-nominated productions and ten Emmy Award winners. He has received ten personal Emmy nominations and one Emmy Award. In 2007 Squires was honoured with the International Documentary Association’s Outstanding Documentary Cinematography Award (career achievement).  His work is regularly featured at the Sundance, Telluride and Tribeca Film Festivals. His numerous documentary features and  TV Specials include: The National Parks, The War, Masterclass, Into the Deep, Soundtrack for a Revolution, Stonewall Uprising, Jazz, The Civil War, New York, Mark Twain, Crime & Punishment, Smashed, Baseball, Lewis & Clark: The Journey of the Corps of Discovery, The Donner Party, Reporting America at War, Ansel Adams, Ram Dass: Fierce Grace, One Survivor Remembers, Amato, Frank Lloyd Wright, Soldiers Of Peace: A Children’s Crusade, Heart of a Child, Compassion in Exile: The 14th Dalai Lama, Chimps: So Like Us, The West, Scottsboro: An American Tragedy and Out of the Past.