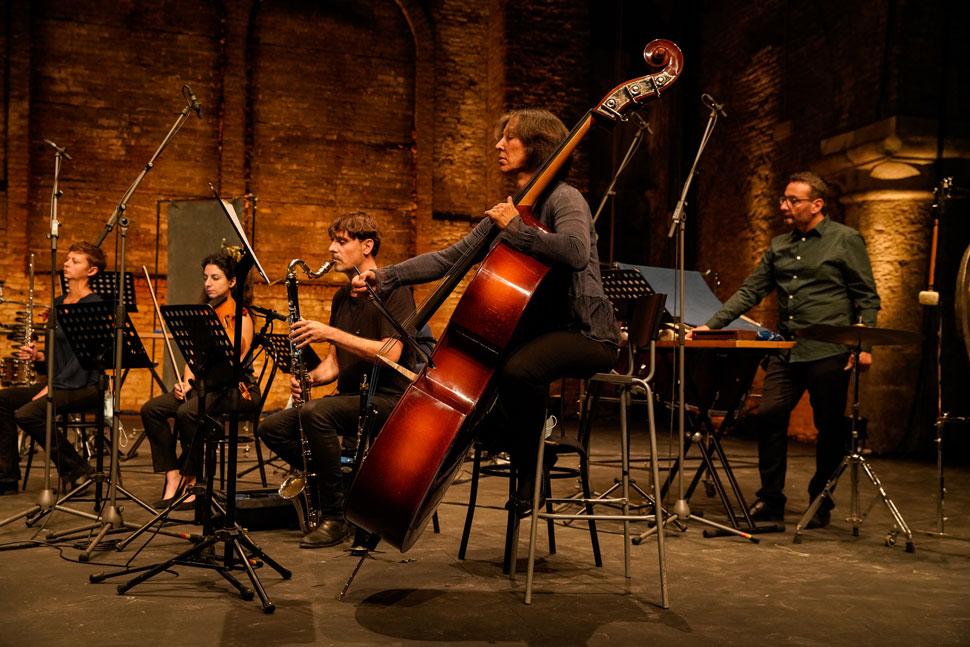 Contrechamps is an ensemble of soloists specialised in the creation, development and dissemination of 20th and 21st century instrumental music for over 40 years. The ensemble is committed to opening up the marvels of this music to a wide audience as well as to highlight the diversity of aesthetics and formats on the contemporary and experimental scene. Since its creation, Ensemble Contrechamps has been working hand in hand with a large number of composers – Pierre Boulez, Rebecca Saunders, Brian Ferneyhough, Beat Furrer, Klaus Huber, Michael Jarrell and Matthias Pintscher, to name a few – as well as with the new generation of creators.
To and Fro by Rebecca Saunders is a duo for violin and oboe, a dialogue, the interaction between two levels, the intertwining of a line created by two instruments, the exploration of a timbric range of sounds that emerge from the silence and disappear back into it. The title Scar, for fifteen soloists and conductor, refers to everything about a scar: the memory and history of a wound rooted in the skin, the implication of violence and defacement. The silence is the canvas on which the weight of sound leaves its mark, and in Scar the sound tears through the surface of the silence delving into the darkness that lies within it.
In Biotope Jacques Demierre imagines the encounter between the Trio DDK (Jacques Demierre on the piano, Axel Dorner on the trumpet and Jonas Kocher on the accordion) and the Ensemble Contrechamps as an interactive spatial situation, the encounter between two living systems shaped by determinate or indeterminate behaviour and dynamic processes based on an awareness of the inclusive situation that generates an ecosystem.