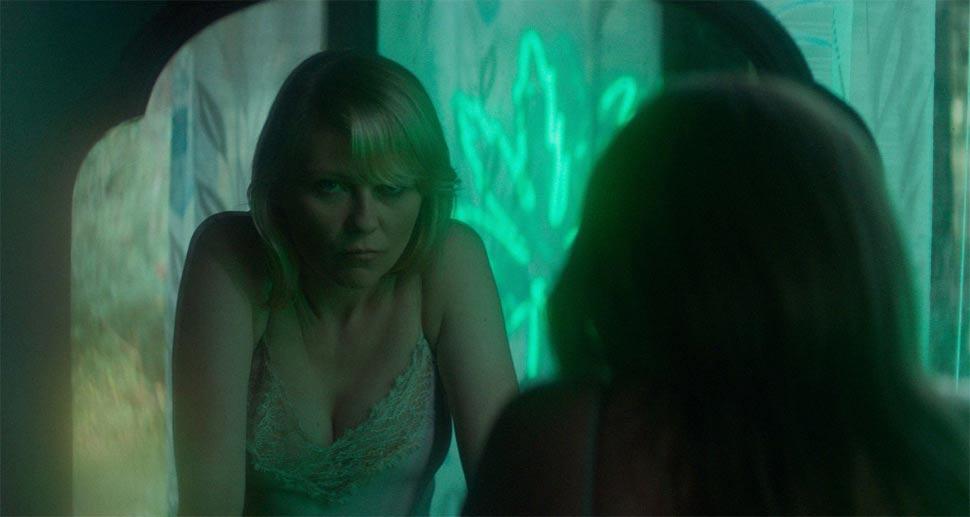 Woodshock is a hypnotic exploration of isolation, paranoia, and grief that exists in a dreamworld all on its own. Theresa, a haunted young woman spiraling in the wake of profound loss, is torn between her fractured emotional state and the reality-altering effects of a potent cannabinoid drug. Immersive, spellbinding, and sublime, Woodshock transcends genre to become a singularly thrilling cinematic experience.

Growing up in Santa Cruz, California, amongst the majestic redwoods, has shaped our thematic explorations within creative expression over the years. The most prominent, however, has shown itself, within the script we started developing in 2010, for this film. Seeing these undefinable, primordial beings at a young age most certainly affected the narrative voice of Woodshock, which is an emotional journey of grief and isolation as experienced through stream of consciousness. We shot in Humboldt County, California, where some of the oldest and tallest living organisms (redwoods) on the planet live. What remains of them, that is. From this landscape of extreme beauty and destruction, Theresa was born. The idea of her being physically and mentally lost in these woods allowed for us to explore her agency, as well as her psychological descent. We were lucky enough to work with Kirsten Dunst to bring a deep understanding of the character to the screen. This understanding, in partnership with the imagery, the score, and the sound design of the film, acts as a singular narrative voice that defines the experience of Woodshock. Theresa is our narrator, and her sensitivity to touch, sound, and sight, guides the viewer through her subjective journey. We see her both identify with and reject her circumstances and surroundings as she becomes increasingly disoriented. The forest is a primal place of return – a sanctuary for the imagination, and as Theresa states in the opening of the film, she longs to go back. We cannot thank our wonderful actors and partners enough for putting their hearts and souls into this project and for making it the unique experience and world that it is.