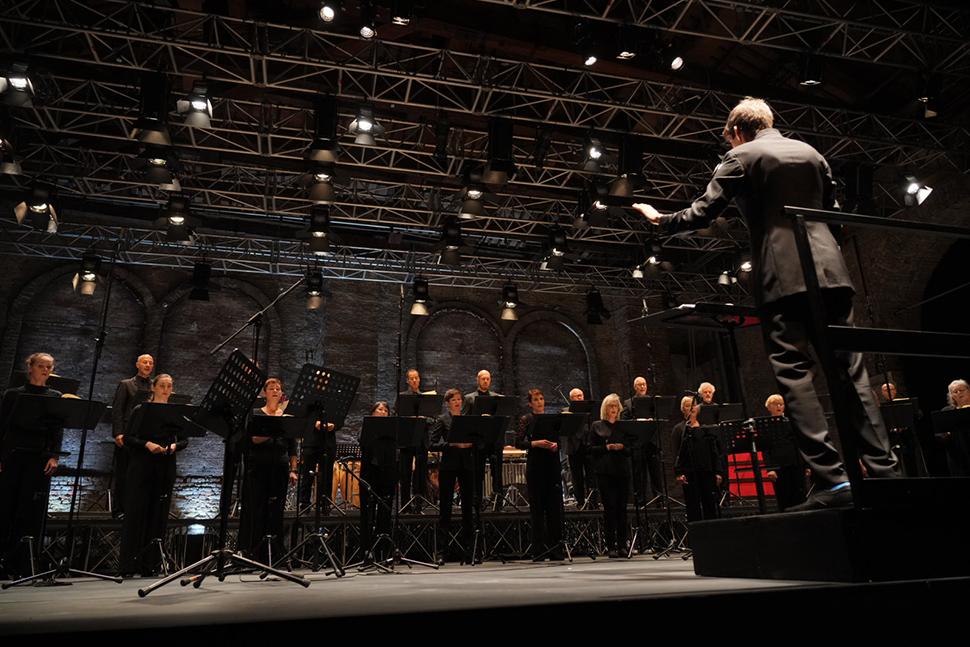 One of the most acknowledged composers of his generation, Francesco Filidei will present the world premiere of Tutto in una volta, piece for two choirs built on Nanni Balestrini’s experimental architectural language and commissioned by the SWR Vokalensemble. Tutto in una volta is the last of the poems from the Ma noi facciamone un’altra collection written by this Neo-avant-garde poet between 1964 and 1968. Balestrini’s text is a sequence of ultra-short verses made up of simple two or three syllable words which endlessly postpone ultimate meaning. Frequent recurrences punctuate the present-past-future time framework and free the ambiguities of their meanings around every corner in a trajectory which ultimately opens up into a further space. As the composer put it “music accompanies the poetry’s fluidity, triggering a series of chords whosenuances change slightly as the music progresses in a kaleidoscope of images fragmented by choir sections.”

Rothko Chapel (1971) by Morton Feldman, like many works by the American composer, is inspired by the large canvases of American abstract expressionism, in this case the octagonal Rothko Chapel, for which fourteen paintings from Mark Rothko were commissioned. The artist committed suicide just a few months after completing the work: it was to pay tribute to him that the Rothko Chapel’s patrons commissioned from Feldman a piece of music devoted to his last great painterly act. Attuned to the spirituality which Rothko’s paintings communicate, the choir and solo vocal work is wordless and reduced to a murmur. The instrumentation is also reduced to the viola, with an opening solo punctuated with interjections from the timpani and a finale whose quasi-Jewish melody is accompanied by brief highlights of the vibraphone, which concludes the piece on a succession of four repeated notes, as if to underline the never-ending passage of time.

Israeli-Palestine composer Samir Odeh-Tamimi was born in Jaljuliya, an Arab city in Israel in 1970: a performer of traditional Arab music, he later studied musicology and composition at Kiel and Bremen. In Venice he will present the piece titled Timna, inspired by the capital of an ancient southern Arabian capital (now Yemen) founded at the end of the 7th century BC. Odeh-Tamimi imagined the rites practised in the temples of this pre-Islamic civilisation and came up with this piece on the basis of a musical language which is an original blend of Western avant-garde and traditional Arabian music. Written by Odeh-Tamimi himself, the text was inspired by an archaic Arabic deriving from the ancient Sumerian language. Composed for mixed choir, flute, viola, cello, double bass and percussion, including ethnic instruments such as shekere and Chinese drums played by the singers, Timna’s world premiere took place on 9th February 2020 in Stuttgart at the Festival ECLAT.