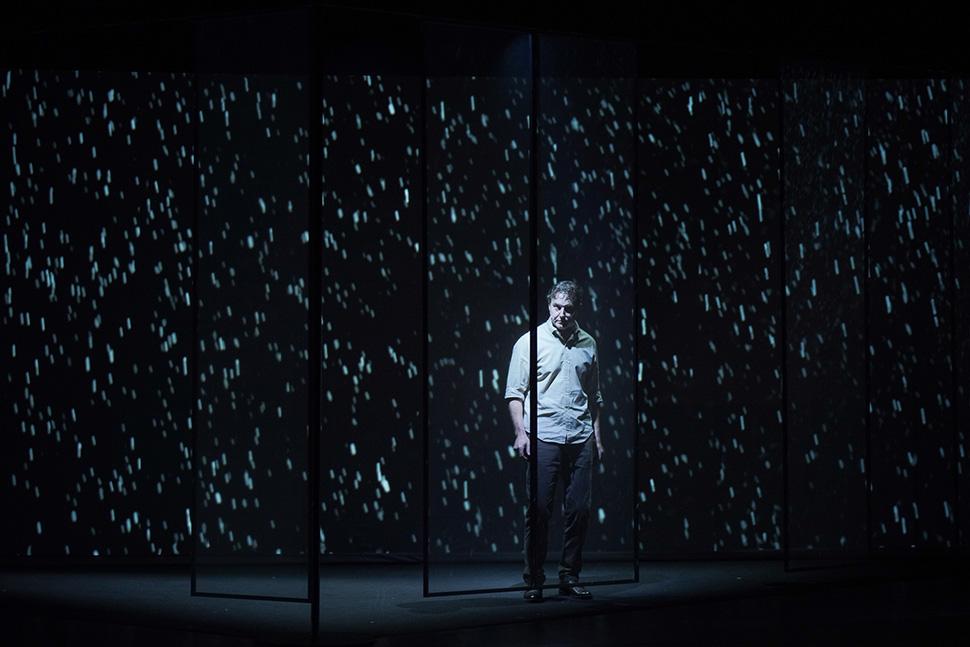 The Book of Water is a chamber music theatre project based upon the novella Man in the Holocene by Swiss author Max Frisch. The work centres around the character of Geiser, a 73-year-old widower, who is dealing with memory loss. In the adaptation of Frisch’s book by Michel van der Aa and dramaturg Madelon Kooijman extra focus is given to the continuous rain and flooding isolating Geiser in his house. These dangerous weather events link the work to the current topic of climate change. Not only is Geiser’s mind eroding; the landscape is also crumbling away, since the rainstorms raging outside are causing landslides and flooding. The Book of Water is a chillingly portrait of a man who is surrounded by erosion, nature’s and his own, and who struggles for one last moment of clarity in which to make sense of himself and of civilisation.

The text in The Book of Water is spoken by the actor on stage, and parts of the narrative are to be shown in the film projections. The string quartet is on stage with the actor and is an integral part of the scenography. The film is projected on surfaces made of stretched curtains that are positioned around and between the performers. The actor is able to create new visual perspectives by moving the curtains, following the dramatic arc of the piece. The film layer features prerecorded footage of the story’s protagonist Geiser, his daughter, and the villagers. The characters on film interact with the live actor and the musicians, extending the scenography on stage.