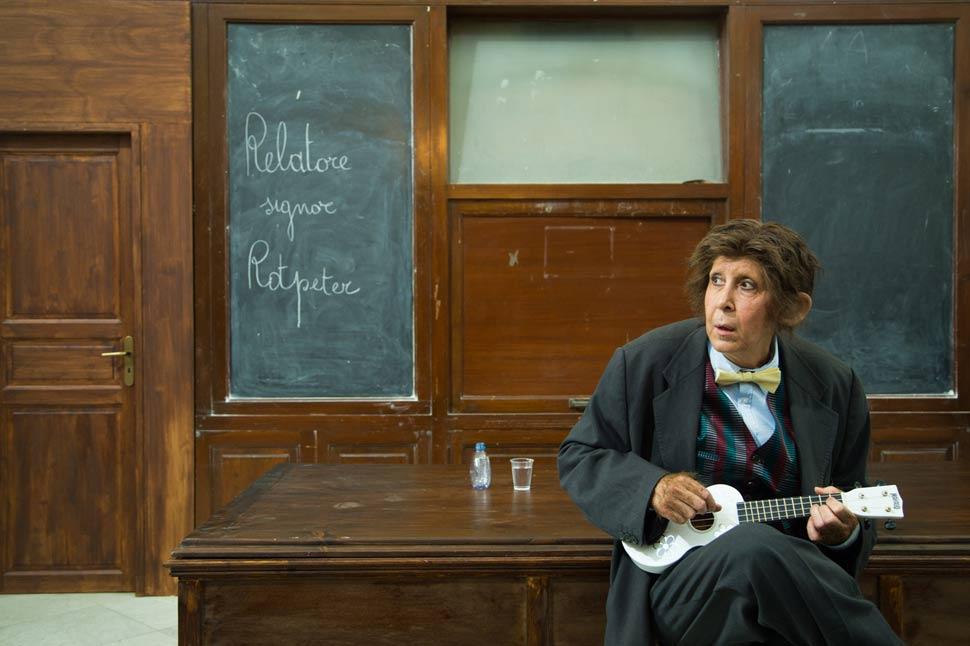 An imaginary portrait inspired by the character penned by Franz Kafka, a monkey become a man, played by the amazing Marina Confalone. Antonietta De Lillo has created a cinematic protagonist who holds within himself timeless needs such as freedom and survival, forcing the spectator to see himself in this strange individual.

It all started when Marcello Garofalo drew my attention to the theatrical adaptation of Kafka’s short story A Report to an Academy, conceived and performed by Marina Confalone, in my view one of the most important actors on the Italian stage. So I went to Naples to see her production in a lecture hall at the University Federico II. Marina Confalone agreed to share this adventure with me and I began to toy with the idea of taking Kafka’s character, Rotpeter, off the written page and bringing him to life in a contemporary Naples, through a long interview. With all the peculiarities of fictional film, I presented my first portrait of an imaginary person, born from the pen of a writer. What had struck me about Mr. Rotpeter’s lecture was his desperate search for a “way out.” It was from there that, together with Marcello Garofalo, I started to imagine a now integrated Rotpeter, whose way out has not brought him freedom but simply a means of keeping going. Rotpeter is a living creature who, speaking of himself, speaks of our human condition. Just as he, in order to adapt to a world that had segregated him, had been compelled to observe it and imitate it, we too are often forced to adapt to a society whose character is increasingly dictated by economic powers and which obliges us to absorb it, at the expense of our humanity and freedom. Our Rotpeter found himself having to fight for his survival but, at the end of this imaginary conversation, feels the need to struggle not just for himself but for others as well. I too, like Rotpeter, believe that if we want to emerge from a condition that perverts our nature and forces us to become something other from what we are, we should follow our desire.